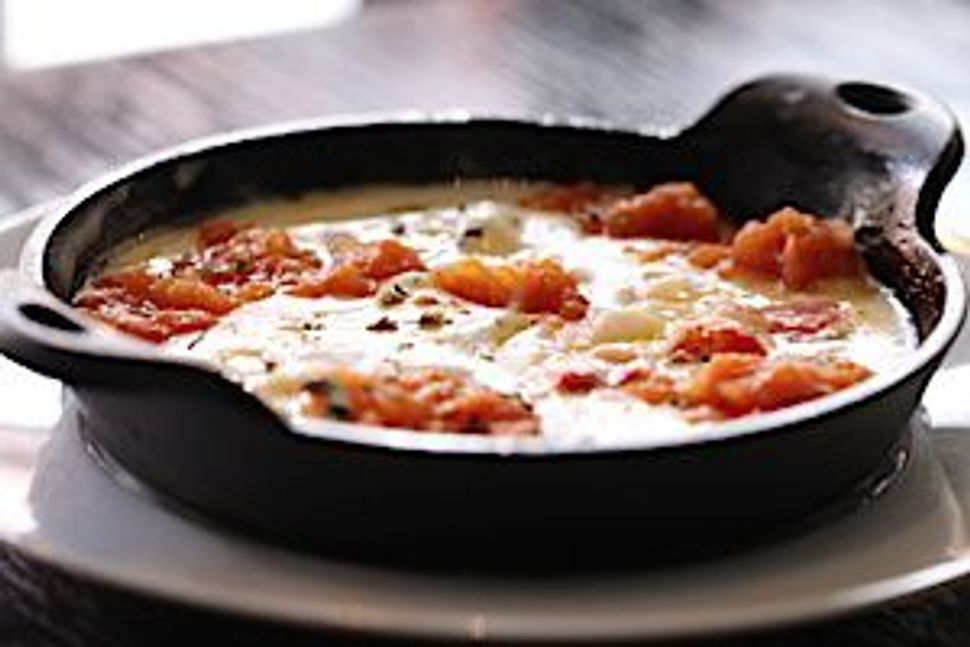 He’s manned the pastry kitchens at some of America’s top restaurants — Clio in Boston, Chicago’s Alinea and WD-50 in New York — but chef Alex Stupak is more focused on conquering Mexican cuisine these days. No, he’s not reinventing the taco. It’s not traditional dishes that he’s serving up either. Mexican ingredients and ideas are the jumping off point for the food that he puts out at his two Manhattan restaurants, Empellon Taqueria and Empellon Cocina.

One of his most popular dishes, a queso fundido (melted cheese), features chunks of lobster in melted tetilla cheese — a smooth, Spanish beauty made in Galicia, Spain that’s mild in flavor whose name (small breast in Galician) is suggestive of its shape; like that of a woman’s bosom. The dish is native to El Paso, Mexico where it is often set on fire and flambéed at the table for special celebrations. Never ones to want to miss out on the party, we sat down with Chef Stupak to re-work the mouth-watering recipe for the kosher home.

Sure, lobster has a unique flavor. But, substituting salsify for the shellfish keeps the integrity of the original ingredient’s texture. The root vegetable gets a bad rap for its looks — a bunch resembles a pile of sticks — but peel away the exterior and you’ll find it very easy to work with. Another similarity between creature and vegetable: both have sweet, soft meat. Here, we’ve found that massaging some chipotle chili puree into the salsify, adds a nice punch of flavor, though it’s certainly optional.

Monterey jack melts well and stands in nicely for the hard to find kosher tetilla. It also has the requisite smoothness that makes this gratin-like dish so craveable. Haolam makes a version that comes sliced. If you’re using this, it’s best to cut each square into thin, even strips to promote maximum meltability. Mozzarella is mild enough to hold the other flavors but, if this is your choice, perhaps pump up the proportion of parmesan to give it bite.

In the Empellon Cocina version, a bechamel sauce (one of the French mother sauces) is whipped up for its thickening effects and then cheese is folded in. The lobster meat is added and then the whole thing is put under a broiler. The cheese casserole is served alongside flour tortillas. Take a scoop and roll it up. Tortillas are not too difficult to make (once you get the hang of it) but store varieties will do fine. Many recipes contain lard, so be careful. But if you are really a balaboosta try this version from Culinary Kosher.

Though this dish’s place at Empellon Cocina is on the dinner menu, we think it would make its mark at Sunday brunch as a quick starter for four to six people or a larger dish for two.

Braised salsify: Heat olive oil in a large sauté pan over medium heat. While oil heats, rub salsify with pureed chipotle chili paste (if using). When oil shimmers, add salsify and toss. Cook, stirring occasionally, about five minutes. Then, add enough water so that half of the salsify is submerged. Simmer until fork-tender.

Fundido: Preheat oven to 450 degrees or turn on broiler. In a nonstick skillet, melt butter. Add chopped onion and garlic and cook until translucent. Pour in milk and flour, season with pepper and clove, and whisk continuously until mixture starts to lightly brown and becomes thick enough to coat the back of a spoon. Add cotija or parmesan cheese as well as a dash of vinegar and cool mixture slightly. Place mixture into a blender and puree until smooth.

Pour butter-milk-flour liquid into a bowl and fold in cheese grated tetilla, Monterey Jack or mozzarella and braised salsify. Decant into a baking dish, or back into nonstick skillet. Smooth out the top of the melted cheese and place in oven. When bubbling and brown (won’t take more than a few minutes), remove. If using, garnish with a few spoonfuls of salsa over the top. Serve alongside warmed tortillas.