Putting the ‘Goldenberg’ Back Into Peanut Chews

For die-hard fans of local food specialties, the prevailing wisdom seems to be you are where you eat. Just Born, the company that manufactures retro favorite Goldenberg’s Peanut Chews, found itself in a sticky situation when its experiment with a flashy national brand that wiped the Goldenberg’s name off the label left fans of the candy confused and sugar-deprived. Now, the makers of the classic confection are bringing the nutty treats back to their local (and Jewish) roots.

Harry Goldenberg got a sweet start to his professional life, skipping high school to help his family make candy apples and lollipops in their Kensingon, Pa. kitchen to sell off their back porch. The business took off, and in 1917 Goldenberg came up with Peanut Chews as a tasty, high-protein World War I ration. They made their civilian debut in 1921, and in 1930, Goldenberg had an innovative idea: pre-package the sweets in already bite-sized bits.

It was a hit. The simple wrapper, featuring Goldenberg’s name over a blue star and a red stripe, covered eight pieces of a candy as unassuming as it was delicious. The not-too-sweet taste of roasted peanuts held together with a sticky molasses base and dipped in a chocolatey coating became a childhood classic for kids all along the manufacturer’s New York to Baltimore market.

“Back in the 60’s when I was a really young kid with three brothers close to my age, I lived in Philadelphia, around the corner from the Goldberg Peanut Chew factory,” one commenter on the website Old Time Candy writes. “A man from the factory [once] came out the loading dock door with a big blue commercial sized box of Peanut Chews. ‘Don’t eat that other candy,’ he said to us, ‘eat Goldenberg Peanut Chews,’ as he handed us four the entire box. We believed at that moment that we were the luckiest kids in the world.” 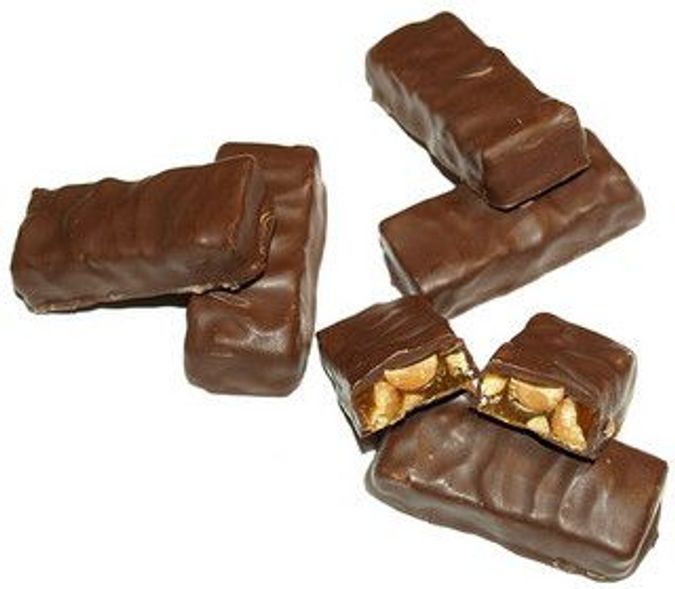 Just Born (they of Peeps and Mike and Ike) bought out the Goldenberg Candy Company from Harry Goldenberg’s grandson in 2003. But unlike Goobers, Raisinets, Sno-Caps, Good and Plenty, and 5th Avenue Bars, all of which left the Philadelphia Manufacturers of Confectionary and Chocolate group for new production locales, Peanut Chews would keep their Philly terroir. The new owners maintained the same plant in Holmesburg, Pa., producing up to two million pieces (that’s around 45 million calories) per shift in 2006.

Still, it would prove hard to leave well enough alone. Peanut Chews would find themselves reconcocted for shelf stability, packed up to sell in international markets such as Korea and Japan, and clothed in a redesigned label that left out Goldenberg’s name entirely. And despite a kicky new marketing campaign, sales in the Mid-Atlantic plummeted. Clearly, mistakes were made.

“We lost probably half of our sales volume in our core markets,” Robert Zender, the brand manager for Peanut Chews, told the New York Times. The new labels were effectively camouflage, throwing longtime Peanut Chew customers off the scent. Zender himself was told by a shop owner that the bars had been discontinued.

Fortunately for its fans, the brand reversed itself in 2011 and re-embraced its Philadelphian origins with a “new” wrapper more like the original. As part of a newly-trained focus on regional marketing, the labels featured the city’s skyline, the Liberty Bell, and, once again, the name of its creator — and according to the latest marketing figures, “Goldenberg’s” is the golden ticket. Peanut Chews sales for the 24 weeks ending June 10 have trounced the same period last year by almost 50%, giving the company its highest revenue ever for the fiscal year. A new marketing campaign highlights the “old-school” appeal of a classic candy, with commercial actors transforming into their younger selves after a bite of the bar.

On the food-review website candyblog.net, candy connoisseur Cybele May gives Peanut Chews points for being “small and easy to share” with “a flavor combination not found in any other candy bar on the market in the states.” But, she notes, “I’ve always referred to these as Goldenbergs.”

Clearly, it pays to stick around.

Putting the ‘Goldenberg’ Back Into Peanut Chews