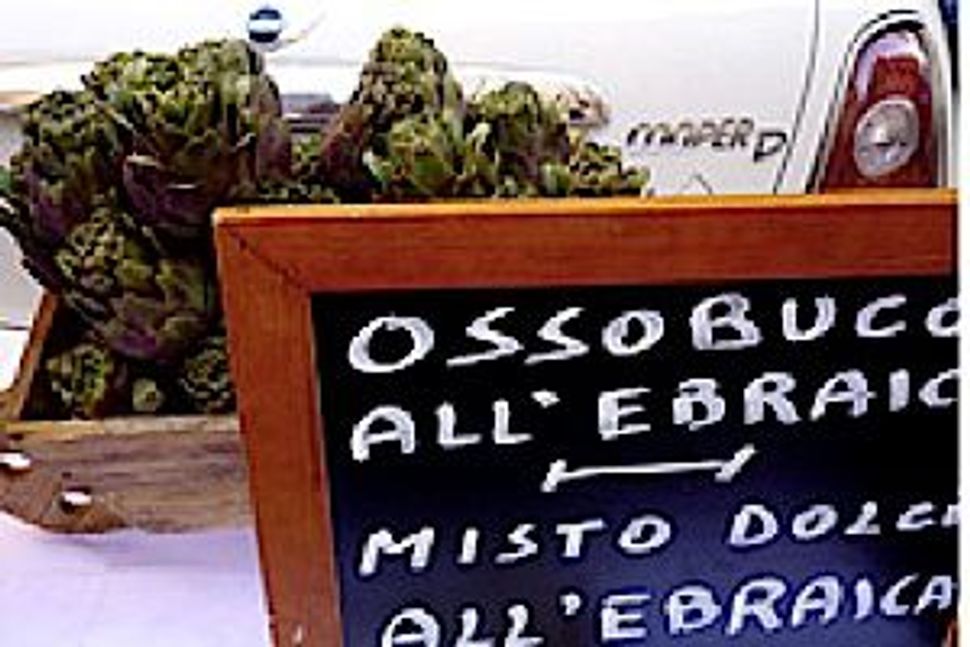 For many, the term “Jewish food” means one of two things: bubby’s matzo balls and the like, or, simply something that’s indefinable. The latter might be because Jews lack one specific country to point to for a cuisine, making Jewish food a mix of a number of different influences. And as Jewish cookbook author June Feiss Hersh said in a panel discussion at the New School earlier this year, “We’ve been thrown out of every best country in the world.”

However, Italy is a different story. This weekend, in a panel discussion presented by the Museum of Jewish Heritage, a 300 person audience learned why.

Cookbook author Jayne Cohen, who moderated, began with a brief history of Jews in Italy. To make a thousands-of-years-old story short, Italy was one of the only countries that Jews were not kicked out of (rather, they were confined to ghettos from the end of the 15th century to the mid-19th century).

Using what was locally and legally available, they crafted a cuisine that fit within their own dietary restrictions. The ghettos around Italy varied (the inhabitants of some were allowed to leave during the day to work, some allowed non-Jews in), and while some had their distinct specialties, one consistency throughout Italian ghettos was that there were many restrictions placed on the food that they were allowed to have.

Today, Italian dishes that were influenced by Jewish cuisine appear on many Italian restaurant menus, but because much of the Jewish community assimilated with Italian culture once ghetto laws were banished, these dishes are not always easily identifiable. According to food historian Cara De Silva, many Roman dishes that include small boney fish (for example, fried anchovies or fish soup) are Jewish. “People had to make the most out of what they had… literally using parts of food that other people would probably throw away,” said De Silva, before naming a few examples of ways that scraps would be put to use: sautéed spinach stems, cheap meat mixed with veggies and stuffed into zucchini, and the ever-popular fritto misto.

The use of certain vegetables in Italian cooking is another sign of Jewish influence. “The Jews were more courageous about certain kinds of vegetables. They were considered very creative about their vegetable uses,” said chef and food writer Silvia Nacamulli. Eggplant, fennel, capers, and onions are just a few ingredients that non-Jews in Italy generally despised, and were thus given to the Jews, who used them to create dishes that are still popular today, such as caponata and fennel gratin.

And surprisingly, there were implications throughout the discussion that it was the Jews in Italy who first got to the tomato. “[Jews] were in many ways responsible for spreading the tomato,” said Cohen, who explained that Jewish merchants who had converted were exposed to tomatoes from the New World in Spain; when they sought refuge in Italy, they brought the tomato, as well as pumpkins. (Yet for a while still, according to food writer Alessandra Rovati, the tomato was seen as a decorative plant.)

Using scraps wasn’t the only way that Italian Jewish cuisine got its identity. Obeying Kashrut and Shabbat laws popularized new variations on traditional Italian foods. One of the most common examples? Pasta salad. According to Rovati, Italian Jews created various pasta salads as a way to enjoy a national favorite without having to cook. Goose was another big item — “to cook Italian, a Jew really would need a Kosher pig,” joked Cohen, but by using geese, Jews could have prosciutto and various other cured meats.

As the panelists discussed and went into animated detail about dish after dish of amazing sounding food, it was clear that they could go on for a while, and that Italian Jewish cuisine is territory that deserves to be more often explored. Yet there is only so long that an audience can sit still in such a situation before getting hungry. Luckily, the event ended at a reception with a sizeable spread of pasta salad, baked fennel, pumpkin pastries.