Serving Up the Nose and Tail in Toronto 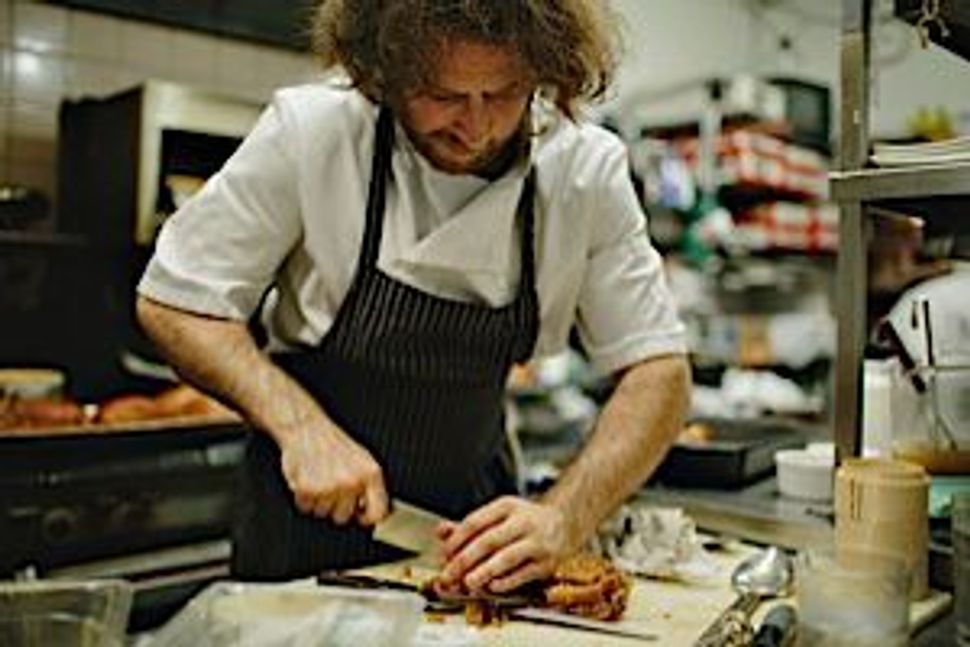 Image by Courtesy of Noah Goldberg

Chef Noah Goldberg returned to his native Toronto last January after working several years in New York for culinary legends Susur Lee and Daniel Boulud, and in London for Anthony Demetre and Fergus Henderson, wanting to create something unique. He envisioned a restaurant where patrons would eat not only whole meals, but also whole animals.

So, in May, Goldberg opened The Feasting Room, an experimental pop-up restaurant in a music bar in downtown Toronto. The restaurant is offering a blind six-course tasting menu dinner five evenings a week for six months, with the menu each week focusing on a different animal. Although diners know what animal they will be eating, they have no idea what dishes will be served. Upon being seated, they get a card with a drawing of the animal, with numbers on it corresponding to the part of the animal being used in each course. Nothing goes to waste, with Goldberg and his team devising dishes that use everything from nose to tail. So far, they have done this for rabbit, goose, lamb, pig, chicken, cow, duck, turkey and buffalo. Now that the fall is here, game will be coming soon.

“My philosophy is to squeeze everything out of the animal, which is something I learned while working for Fergus Henderson at St. John Bar & Restaurant,” Goldberg told the Jew and the Carrot in a phone interview. “A lot of chefs are doing nose and tail, but not many are taking people through the whole animal. And it’s also hard to even find some of these animals on restaurant menus, to start with.”

All the animals are sourced from within the province of Ontario, with Goldberg often traveling himself to pick them up from the abattoir. He has developed relationships with local farmers, which is a central component of his philosophy. “It’s really important for me to know where and how the animals have been raised and fed,” the chef explained. Given his high standards, procuring meat and also seasonal organic fruits and vegetables has been challenging. “Sourcing is hard,” Goldberg shared.

Having learned butchery at Whitehouse Meats in Toronto’s famed St. Lawrence Market, Goldberg butchers most of the animals himself. “I really want to push offal,” the chef said. “A lot of cooks don’t know what to do with offal, people are scared of it,” he added. “We get away with serving testicles and heart. People lose their inhibition because of our cooking and nice presentation.” (Watch Goldberg butcher an ox heart.)

Goldberg is essentially testing the waters with the half-year project to see if there is sufficient audience for this kind of dining to support a full-fledged permanent restaurant. Although Toronto Life warned, “this is not food for the faint of carnivorous heart,” Goldberg reports that The Feasting Room has been getting 20-30 patrons per night, with some coming back every week. “They think it’s cool that we do animals that others aren’t,” he said. At $65 (with an additional $35 for wine pairings), Goldberg contends, “it’s a steal.” He suggested, “You’d be paying $250 for something like this in New York or London.”

Goldberg, 29, has come a long way from eating kosher style as he grew up in a Conservative family that gathered for Shabbat dinner every Friday. Goldberg, who has a degree in economics but did not go to culinary school, admitted that starting to eat pork and seafood was “mentally hard” at first.

“Jewish cooking is a tool for me,” he said. Although traditional kashrut is clearly not part of his philosophy and Judaism doesn’t play much into his menus, Goldberg does occasionally include dishes inspired by identifiably Jewish foods. When duck was the animal of the week, he served duck breast with blueberry blintzes, sweet potato latkes, and liver and blueberry sauce. When chicken was the focus during a hot week this summer, he and his sous chef considered making chicken soup popsicles, but ultimately passed on the idea.

So far, Golberg is finding Toronto to be “really receptive” to his concept. He is glad to be home, where he can cook for his friends and family and see people he knows in the dining room. “I just want people to come in and have a different kind of experience and to enjoy.”

Serving Up the Nose and Tail in Toronto