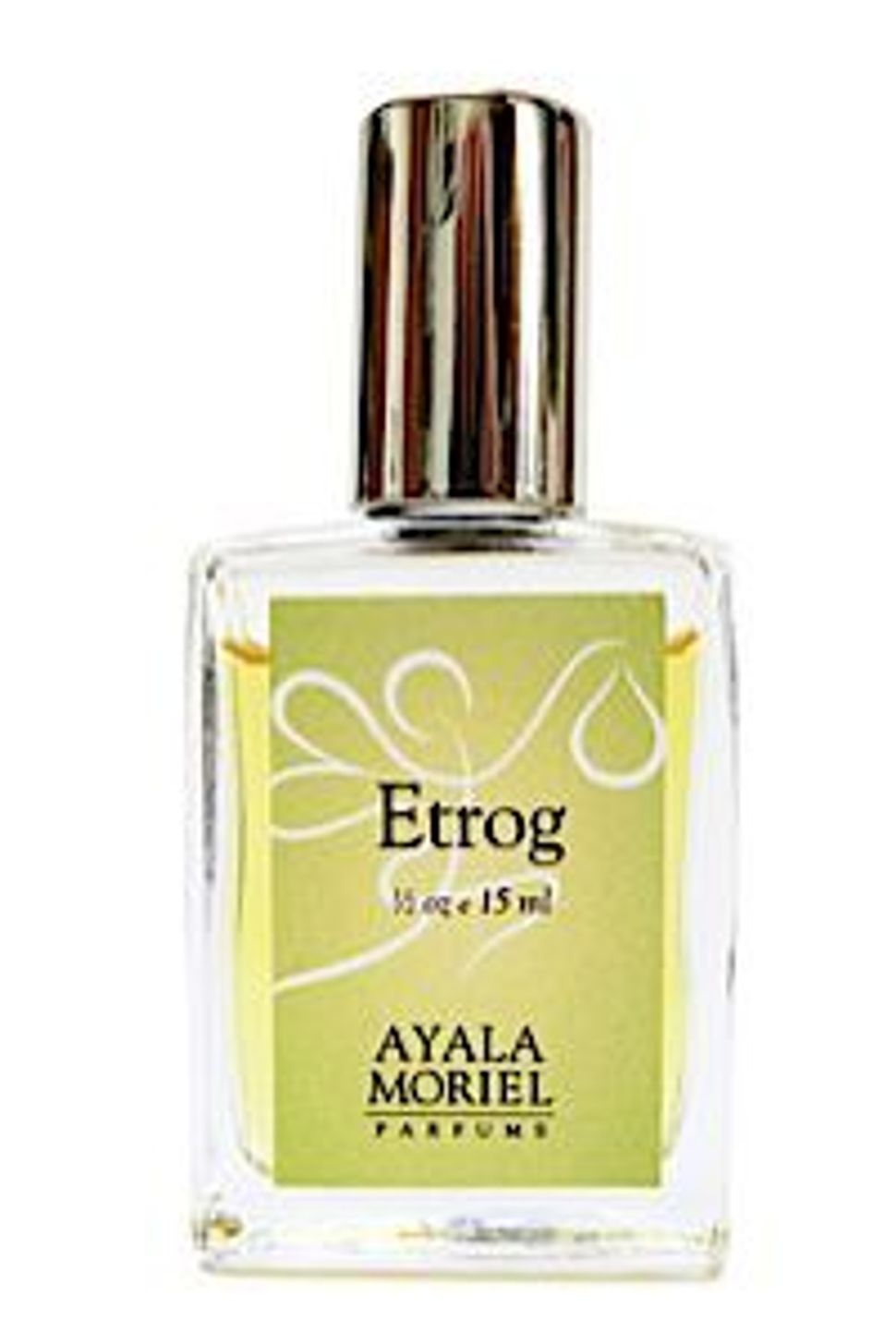 Image by Courtesy of Ayala Moriel

Ayala Moriel, a Vancouver-based artisan natural perfumer is attracting some interesting attention this sukkot and it’s not for her sukkah. Moriel has bottled the scent of the holiday (or atleast it’s signature fruit) in her Etrog Oy de Cologne. The perfume is made by blending the essence of etrog or citron with smells of pomelo, Japanese mint, green myrtle, honey, lemon myrtle and frankincense.

The scent is one of the latest among the approximately 50 all-natural hand crafted fragrances Moriel has created for Ayala Moriel Parfums, the company she started in 2001. “It’s climbing fast onto my bestseller list. It’s nice to see something new so well received,” she said about the etrog cologne, which has more staying power than most citrus fragrances, which tend to dissipate quickly.

Although Moriel is known mainly for her botanical fragrances, some of which are considered by experts to be as refined as some of the classical European perfumes. She has also begun to expand her offerings to include perfumed tea and chocolates.

“It’s like adapting a short story into a movie” Moriel said of her process of producing food stuffs that correspond to her perfumes.

The teas are naturally perfumed with aromatic plants and spices. “You don’t just pour essential oils onto the tea leaves,” Moriel explained. “When blending teas, you really have to worry about taste, which is obviously not something I have to consider when I create my perfumes.” In particular, she needs to cut down on the number of ingredients in her four teas (for instance, there are 20 in her Charisma perfume, but only five in the corresponding tea). She also needs to consider which elements would be toxic if ingested. “It’s about simplifying the formula, about creating an accurate impression of the perfume in the tea.”

Moriel launched her line of perfumed chocolate bars in 2010 after initially introducing perfumed truffles in 2006, which she made herself by adding essential oils, extracts and liquors to chocolate ganache through “a lot of experimenting.” In her long search for a chocolate collaborator, she eventually found Rachel Sawatzky of CocoaNymph Chocolates and Confections.. The two artisans have worked together to create chocolate bars matching four of Moriel’s perfumes.

The biggest challenge in making the chocolate bars was finding ways to create a taste that would echo a perfume’s smell without the use of liquid ingredients (such as Moriel used in her truffles). In her White Potion truffles, Moriel had used almond extract as a translation of the tonka bean, which is key to her White Potion perfume (the tonka bean, which smells like a combination of caramel, vanilla and bitter almond is carcinogenic and illegal for use in food in Canada). She and Sawatzky used crushed almond and coconut pieces instead for the bars.

“I really like to work with different mediums,” Moriel reflected. At this point, the teas and chocolates account for a relatively small portion of Moriel’s business, but she likes how they take her out of her comfort zone. “They help me push my boundaries and broaden my appreciation for other artisan cultures, and for the raw materials I work with.”

And, despite her new citron perfume’s popularity, it doesn’t look like there will be an etrog flavored tea or chocolate any time soon. The main issue would be sourcing of the main ingredient. Since there is no essential oil of citron available, Moriel had to painstakingly create her own etrog tincture for her perfume from fruits donated to her by family in Israel and fellow members of the Vancouver Jewish community. However, she did note that sourcing may become easier, since one of the only etrog farmers in North America, John Kirkpatrick of California’s San Joaquin Valley, recently heard about Moriel’s perfume and sent her some of his product.

And then there’s the matter of the perfumer’s discerning taste. “I’m personally not a fan of a lemony flavor and dark chocolate,” Moriel stated definitively. Then she mused that perhaps it would work with white chocolate. “Etrog would be beautiful in a tea,” she finally conceded.