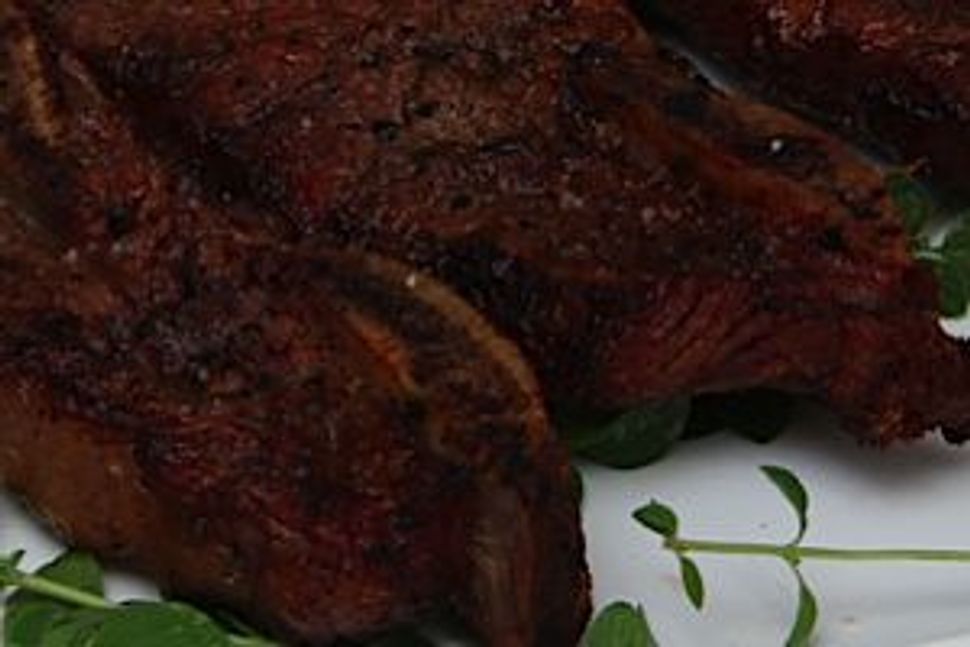 Being an African-American who is a Jew-By-Choice means having to do a lot of culinary negotiations. The table is where I integrate both sides of my hyphen. The plate is a means of “locating” myself squarely in the history of both Diasporas — African and Jewish, and all the places those Diaspora’s represent from Angola and Alabama to Ashkenaz, from South Carolina and Senegal to Sepharad. Cooking is how I pull all of my parts together and articulate who I am to those who might not understand how someone like me could be culturally “possible.” Shabbat gives me an opportunity to look within and use my cooking to tell stories that friends of all backgrounds have never heard — stories of history and migration, struggle and triumph, loss and recovery.

I often serve this West African Style Brisket on Shabbat, which is inspired by recipes from Nigeria, Senegal, Eastern Europe and the Mediterranean. The dry spice mixture is a take on suya, a very old spice mixture from West Africa, hearkening back to the days of the medieval salt and gold trade. Certain flavors like garlic, ginger, bay leaf, and onion are common in both culinary traditions; while others like the inclusion of peppers, olive oil, horseradish, and the use of stock, point to different stops on the map as each Diaspora wound its way to North America.

Innovating foods that cut across cultural lines was at first uncomfortable. People from both backgrounds often questioned the authenticity or legitimacy of my Black-Jewish self. I took that problem to the kitchen, working it out in terms of ingredients, stories, flavors. At first, I felt like I was blurring something within myself, muddying my Blackness or my Jewishness. Is it okay to put that into my albondigas? Can I “convert” Grammy’s recipe? Then I realized that I wasn’t destroying any traditions, I was making my own. I was using my recipes to re-make myself and make peace with the fact that I was different, but solidly a part of two of the world’s most ancient peoples. Cooking this way is my defiant way of saying that I am not rootless.

This brisket allows me to tell the people I have over for Shabbat about how Blacks and Jews have often fomented culinary change and been responsible for the migration of foods as each group was pushed around the globe. We’ve been in many of the same places together, so why not blend all of those traditions together and see what comes of it? In my kitchen, that new tradition means a melodious mishmash of matzo meal fried chicken and kasha varnishkes, peach cobbler kugel, cabbage stuffed with Jollof rice and collard greens, black eyed pea hummus and z’hug prepared with African American heirloom peppers. My food is my flag.

Michael W. Twitty is a culinary historian and Judaics teacher from the Washington D.C. area. He is currently working on The Cooking Gene Project which explores his roots through food. He blogs at www.Afroculinaria.com and www.theCookingGene.com

Preheat your oven to 325 degrees.

1) Combine the spices and salt. Save about two teaspoons for the vegetables. Rub in the minced garlic and ginger, then sprinkle with the remainder of the spice mixture. Heat three tablespoons of olive oil in a large Dutch oven or pot. Sear the beef all around, or about 3-5 minutes on each side to an even brown. Remove from the Dutch oven and set aside.

2) Add the onion, bell pepper and hot chili to the oil in the pan. Season with the remaining seasoning. Saute until the onion is translucent and add the tomatoes and mix together and cook for about five minutes.

3) Add the sugar and stock, horseradish, bay leaves and thyme. Transfer to a bowl and set aside.

4) Place the onion rings at the bottom of the pan and sprinkled with the remaining tablespoon of olive oil. Place the brisket on top of them. Cover with the vegetables and stock.

5) Cover tightly and bake in the preheated oven for 3.5 hours until the brisket is fork tender.

6) Remove the brisket. If you wish to serve hot from the oven, allow 15-30 minutes to rest and absorb liquid, then remove and carve against the grain. If you are planning on serving it later in the day or the next day, cool and refrigerate. Once the brisket is chilled, you can remove excess fat and slice—always against the grain. You can then use the sauce to cover in a pan or pot and heat gently for a half an hour or more until heated through.