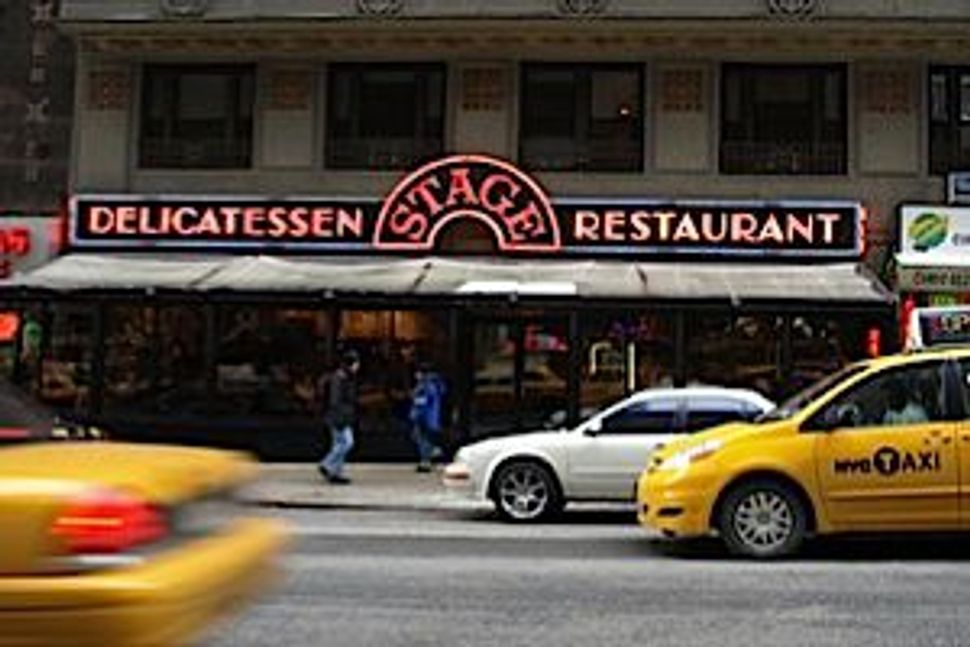 Oh sure, in her later years she was easily dismissed as tired, failing, cranky, and limping along. Just a mere hint of her former greatness remained visible through the accumulated knickknacks and tchotchkes, and her telltale shtick. Once the talk of the town, now just seemed warmed over and rehashed for the tourist throngs, like a day old slice of salami repurposed into an omelet. They’ll say it hadn’t been the same for years, or even decades, and that her time was past, but they know in their hearts that even at this age, she was taken from us too soon.

The Stage was founded by Max Asnas, a Russian Jewish immigrant with a gravelly Yiddish accent, a wide belly, and a gift for gab. With his prime location near the Broadway strip, Asnas catered to celebrities and schmoozed like no other. He hung their pictures, promoted their plays, and worked the room with a shameless efficiency. Sure, many of these celebrities were Yiddish speaking Jews, like Mel Brooks, Milton Berle, or Carl Reiner, but many weren’t, and Asnas cultivated an environment where the Jewish deli became just another American institution to them, with matzo ball soup as comforting and familiar as Campbell’s cream of tomato.

At one point in the early 1960’s, someone decided it was a good idea to strap a microphone on Asnas, and record him walking around the deli chatting up customers. It was edited into an album called “The Corned Beef Confucius,” and it perfectly captures the Stage at its peak. “For this record to have the proper flavor, you have to rub a little corned beef fat on top,” recommends one customer, while Jack Leonard, the comedian insists it really needs “those little gree-bee-knees [gribines], you know, those little Jewish popcorn.” Assimilation wasn’t just accepted at the Stage, it was sought after. The deli epitomized an era when Jewish culture, comedy, and flavor was making fantastic inroads into American society. On the recording, Asnas recalls an old women walking in and asking if the Stage was a kosher deli. “You’re Jewish,” she told Asnas. “For the ham, I have a gentile who slices and sells it,” Asnas replied to her, and when she asked where his accent came from, he insisted he’d picked it up from the customers.

The Stage brought the deli world the wall of celebrity photos, the association with Broadway shows, and the gigantic sandwich. Its sandwich war with its neighbor, and longtime rival the Carnegie Deli, came to a head in the late 1980’s, but only after a decade or so of cold war style arms races, measured in ounces of pastrami and corned beef, so that the fight for bragging rights brought us to a point where six inch-high sandwiches are the expected norm in Jewish delis.

In its later decades, the Stage fell prey to the same forces that brought down many other delicatessens, including the rising cost of supplies and labor, a decrease in interest in deli food (gribenes had long since moved from the mainstream), and a changing dynamic in its location (gone were the showbiz tycoons, replaced by tourists). In the end, it was felled by rent, of which the Stage paid over a million dollars annually, forcing it to charge staggering sums for its massive sandwiches ($17 for a corned beef sandwich).

Instead of a Stage Deli filled with excited tourists and nostalgic former locals, reeking that beautiful musk of steaming garlicky meats and browning blintzes, what will we have in its place? Perhaps a Starbucks, or a souvenir shop, blending into the background of a Times Square wiped clean of its past. It won’t have spinning tiers of cheesecake, lit up like diamonds, or waitresses with decades of smiles and snappy answers to stupid questions. It won’t be a place where America falls in love with Jewish deli, and Jewish food, and that particular New York brand of Jewish culture.

It’ll just be a place, where once upon a time, a great deli stood. Alef ha-sholem.