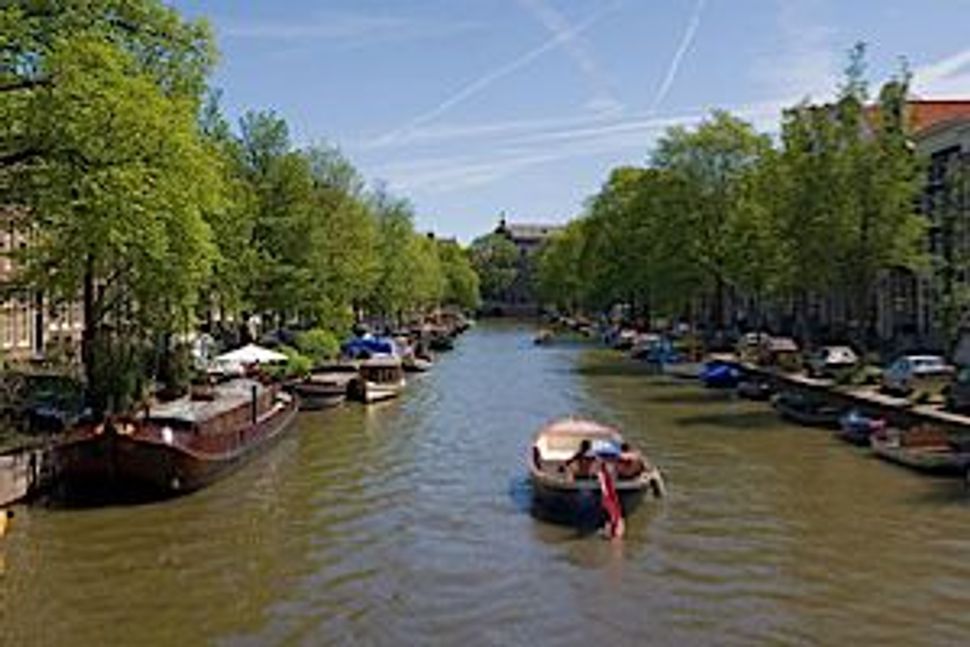 Residents of the Netherlands can pick up a bolus (sweet roll) or some pom (a chicken dish) to eat almost anywhere in the country, but how many of them know that these foods have Jewish origins?

Amsterdam’s Jewish Historical Museum is banking on curiosity about these and other traditional Jewish foods to bring people through its doors to experience its new “Jewish Flavor: A Worldwide Cuisine” exhibition, which opens December 21 and runs until May 5, 2013. It is the first-ever museum show on Jewish food in the Netherlands.

With only approximately 30,000 Jews living in Holland (about half of them in Amsterdam), the museum hopes the show will bring in many non-Jewish visitors who love food and cooking and are curious about Jewish cuisine and culture. For the museum’s Jewish visitors (mainly foreign tourists), “Jewish Flavor” will be a sweet — and savory — trip down memory lane, and also serve as an introduction to unique Dutch Jewish foods.

“Food culture is really big in the Netherlands,” Batya Wolff, the exhibition’s curator told The Forward in a phone interview. It’s good timing for the show, which has been a year and a half in the making.

Wolff described how the exhibition is designed around two pillar concepts of “kashrut” and “Diaspora,” with the former pertaining to the limitations on Jewish food, and the latter to the variety and adaptability of it. “We want the audience to be part of it, to experience and encounter the Jewish kitchen,” she said about the incorporation of everything from historical artifacts to interactive audiovisual technology to real food for people to taste.

There will be hundreds of Jewish cookbooks (vintage and modern) to peruse, and Jewish cooking tools and utensils like a Shabbat oven, a cholent pot, a kugel mold, a marrow remover and a bug checker to examine.

The Forward’s video on the making of gefilte fish will be on view, and a The Jew and the Carrot will be one of several Jewish food blogs visitors can read at computer stations.

To be sure, visitors will learn about the history and composition of Ashkenazi standards like chicken soup, kugel, challah, matzo, bagels, and gefilte fish. Sephardic foods like couscous and adafina (a cholent with chickpeas and beans) will also be highlighted.

But what people will find here that they won’t find elsewhere is the story of the bolus, a popular Dutch sweet roll made with raisins or candied citrus peel dating back to medieval times that arrived in the late 16th century to the Netherlands with Spanish Jewish immigrants. Later arrivals from Portugal brought another kind made with almond paste to Amsterdam, where the mixing of Sephardic and Ashkenazi traditions gave rise to a ginger bolus.

Similarly, the average Dutch person is likely familiar with the ubiquitous pom-on-a-hard roll sandwich, but probably does not know that pom originated with Dutch Jews who immigrated to Surinam in the early 17th century. It is a roasted dish made with chicken, tayer root and lemon juice — a kind of cholent or kugel in which the Jews substituted the starchy root of the local tayer plant for potatoes. In an interesting twist, pom returned to the Netherlands with Surinamese immigrants in the 1970’s.

The exhibition also includes several contemporary art pieces commenting on Jewish food. One is a conceptual piece called “Meaferah” by Israeli artist-designer Ken Goldman. It is a ceramic egg-cup resembling an ashtray for use on Tisha B’Av, when Jews traditionally eat hard-boiled eggs dipped in ashes before they begin their fast. “It’s a reference to the ritual, but also a tongue-in cheek statement on the fact that smoking is what keeps some people going all day without food,” Goldman explained by phone from his home on Kibbutz Shluchot.

The exhibition will be accompanied by a full range of programming, including food and wine tastings, a master class in making kugel (the Dutch variety is made with pears), kids’ cooking classes, and film screenings. Also, the museum, together with De Kookboekhandel publishing company, is releasing a collection of 40 Dutch-Jewish recipes with a foreword by Claudia Roden, who will be on hand for the exhibition’s opening.