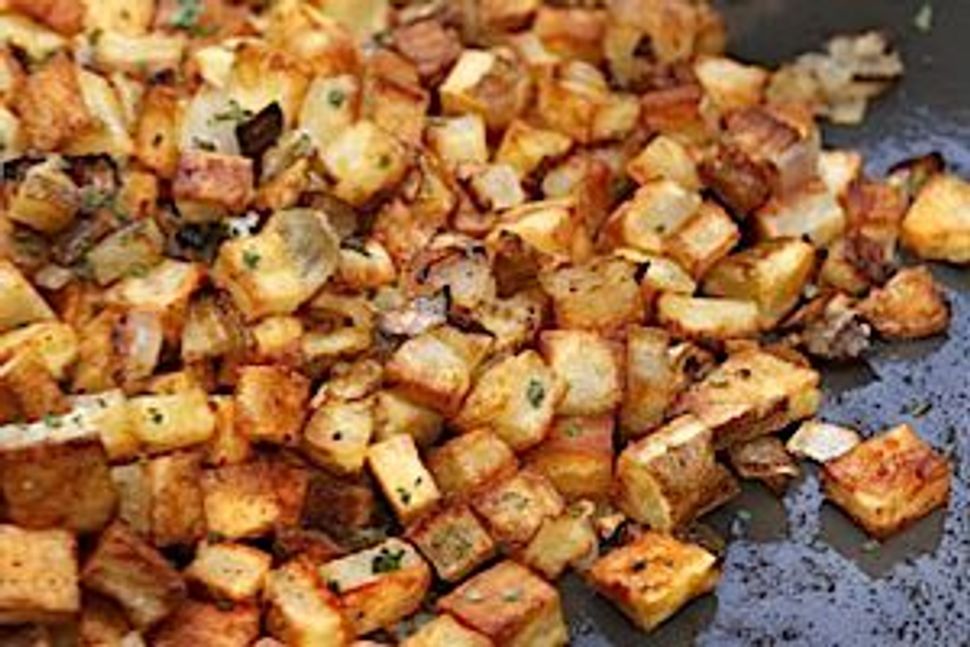 Image by Courtesy of Michael Ruhlman

“It’s this wonderful cooking fat that needs to be better used,” said Ruhlman in a phone interview. “I mean, if you have had potatoes fried in schmaltz — they rock!” And so he turned to his neighbor Lois — an Ashkenazi Jewish woman in her 70s — to teach him the magic of rendered chicken fat.

The result is a self-published iPad app (hardcover and ebook formats will be published by Little Brown in the fall, 2013) with one basic schmaltz recipe with step-by-step photos (both Lois and Ruhlman insist on the addition of onion), plus nine traditional uses and 15 contemporary recipes.

Ruhlman, who is not Jewish but professes to be fascinated by Jewish cuisine, covers most of the bases with recipes for schmaltz-heavy matzo ball soup, chopped liver, cholent, kugel, knishes, and more. He then shows adventurous home cooks the potential of schmaltz with sophisticated recipes like Parisienne gnocchi and pate de foie gras en terrine. (While you won’t find any overtly treyf ingredients in the book, many of the contemporary recipes, like the vichyssoise with gribenes and chives and the brioche, contain dairy along with the meaty schmaltz.)

Of course Ruhlman, who has authored cookbooks with culinary greats like Thomas Keller and Michael Symon, puts his own spin on even the most classic recipes. Fish sauce, hardly a shtetl pantry staple, appears in the egg and gribenes spread, for example. Ruhlman also adds red wine vinegar to Lois’s traditional chopped liver recipe, which she says is “insanity.” He promises that the acid helps to balance the richness and accentuate the flavor.

In an audio clip in the app, Lois says, “I love the continuity of schmaltz in our family, in the history of the Jewish people, in the food — it’s what holds everything together, or did for a very long period of time. Now it’s become unique, or something exotic, which it shouldn’t be. It’s very basic and long-term.”

Despite its prevalence in Europe, schmaltz use began to decline in Jewish homes by the 1900s. “In America,” writes Gil Marks in the “Encyclopedia of Jewish Food” “schmaltz early on in the twentieth century lost some of its importance, due to the availability of kosher oils, margarine, and vegetable shortening…”

Ruhlman offers a few of his own explanations for why schmaltz has fallen out of favor. Number one? Our fat-phobic culture. “Here in America everyone is so afraid of fat,” he says. “I’m sort of a fat evangelist. Not that I think that we should start eating tons and tons of fat. It isn’t great for you…but we shouldn’t be afraid of it either.” In Jewish homes, Ruhlman has found, schmaltz has been dubbed “heart attack food.”

Beyond the health implications, says Ruhlman, “it’s sort of cloistered in the world of Jewish cuisine, which is…not widely embraced by the population at large.” But as he shows in this cookbook, schmaltz has applications well beyond the conventional Jewish kitchen. For example, he uses it as an emulsifying agent in a kosher béarnaise-like sauce in place of butter to be spooned over chicken. And he swears by the schmaltz brioche: “It creates a texture and a crust that is just uncommon when you make traditional brioche.”

Perhaps this book won’t lead to high-end chefs bragging about schmaltz fries on their menus. But it’s a good start. People are frying with duck fat, so schmaltz shouldn’t be too far behind. Right?

Schmaltz-Roasted Potatoes with Onion and Rosemary

Potatoes cooked in animal fat — beef, chicken, duck, or turkey — are superior to those cooked in vegetable fat. Something about these fats makes the potatoes especially crisp. Furthermore, the fat itself is deeply flavorful, and the potatoes absorb this flavor. For this reason, any kind of potato — from shredded potatoes for latkes or hash browns to French fries to leftover mashed potatoes — fried in schmaltz is fabulous. Here, the savory schmaltz combines with the rosemary and sweet onion to make a simple but delicious side dish.

1) Put a heavy-gauge roasting pan or sturdy sheet tray in your oven and preheat the oven to 425°F/220°C.

2) Remove the pan from the oven and add the schmaltz (I speed the melting by putting the tray over a hot burner). Add the potatoes, stir to coat with the fat, and roast for 15 minutes.

3) Add the onion and stir to coat. Return the pan to the oven and roast, stirring as necessary, until the potatoes are golden brown and crisp, another 30 minutes or so.

4) Sprinkle the potatoes with rosemary and season with salt and pepper to taste.

Reprinted with permission from “The Book of Schmaltz: A Love Song to a Forgotten Fat” (Ruhlman Enterprises, 2012).