Dining in the Dark at Nalaga’at 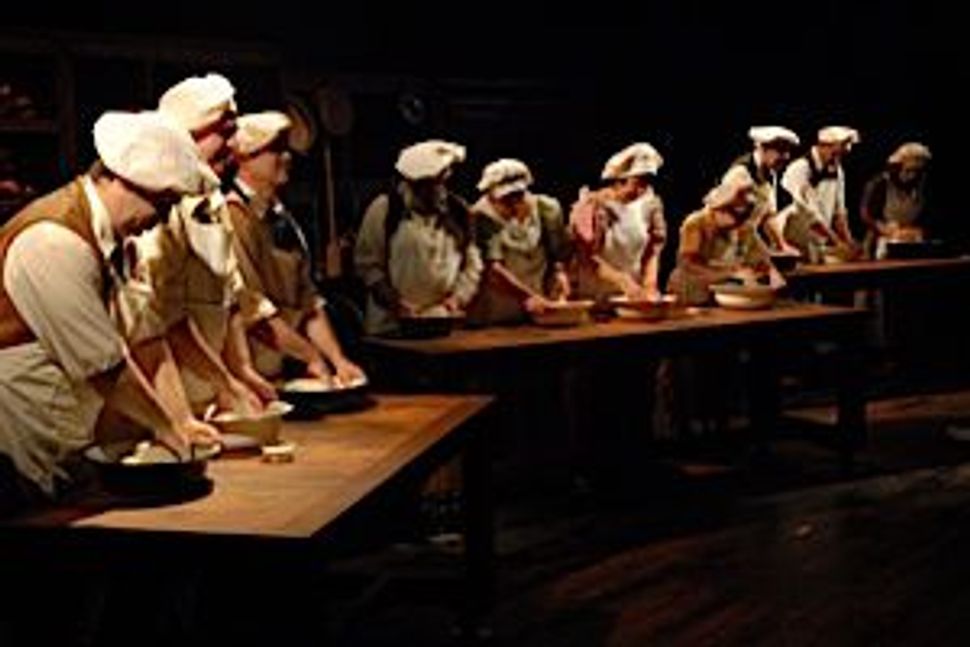 Image by Courtesy of Nalaga’at

One doesn’t usually expect restaurant patrons to eat high-end cuisine with their hands. But that is precisely what guests will be encouraged to do when they dine in total darkness at a special pop-up restaurant called BlackOut in New York later this month.

Not only will the restaurant be pitch black, but its waiters will all be blind. The special dining opportunity is part of a temporary transplant, of Israel’s Nalaga’at Center (the name means “please touch”). The one-of-a-kind experience offers sighted and hearing people a taste of what it is like to live with a loss of some of their senses.

The other aspects of Nalaga’at are a stage production called “Not By Bread Alone” performed by deaf-blind actors, and a café called Kapish staffed by deaf waiters. “We are essentially recreating the Nalaga’at Center, located at the Jaffa port, in New York,” explained Adina Tal, Nalaga’at’s founder and artistic director, by phone. “We did the same thing in London a couple of years ago, and it was very successful.”

A great deal of thought about conveying the experience of blind individuals went into planning the food for the New York version of BlackOut. After many discussions between staff from Danny Meyer’s Union Square Events and Nalaga’at, executive chef John Karangis came up with a menu that is “a complete sensory experience that is both comforting and challenging.”

“The challenge was to create very high-end, seasonal, kosher style dishes with multiple textures and flavors — that could be eaten in complete darkness,” he told the Forward by phone. The idea was to come up with dishes that could be eaten either with utensils, or by hand, and whose taste and feel would be primary to the food’s presentation and the diner’s experience. “Since there is the option for using your hands, this allows for plating things differently, for enabling the guest to search for, touch and feel the different ingredients of the dish separately,” Karangis explained.

That also meant staying away from foods that were sticky or too hot. “Mashed potatoes, polenta and risotto were out,” he said. It was definitely a challenge to come up with the menu, but it is a great opportunity to serve food that is slightly cooler than usual. “Usually food is either piping hot or cold,” the chef said. “This warm temperature is the best way to eat it!”

In the end, Karangis settled on a menu of roasted beet salad with poached pears and sorrel with a vinaigrette, mostarda and pecan crisp, a choice of two entrees, with the first being a mushroom and root vegetable wellington, or of salmon that is cured with salt, sugar and herbs and lightly smoked. “It will have an unctuous, melting quality,” the chef noted.

The final course will be a combined cheese and dessert course with Stilton and deconstructed baklava of crisp wafers, pistachio brittle, raw pomegranate seeds and honeyed walnut puree.

Tal spoke with the Forward as she was preparing to make the 5,700 mile journey with 34 other Nalaga’at members, including 11 actors, 11 sign language translators, two Kapish staff, and five BlackOut waiters. During the conversation, she reflected on how food is central to all three components of the Nalaga’at experience.

“Not By Bread Alone,” the play to be performed by the deaf-blind actors is about their dreams and aspirations. However, bread is used as an organizing construct for the production. “It’s no coincidence that we chose bread, because it has a deep meaning in all cultures,” Tal noted.

“The baking of bread creates the time frame for the show, since deaf-blind people feel time differently than the rest of us,” Tal continued. The 80-minute play begins with the actors kneading bread on stage, and then it bakes during the time that it takes for the actors to present the rest of the production. At the end, the audience can taste the bread.

According to Karangis, the two seatings per day for BlackOut’s three week run, which will take place at the NYU Skirball Center, are almost sold out. There may still be time to reserve your place at the pop-up restaurant. Admission to BlackOut costs $200 per person, in an all-inclusive package of food, beverage, tax, gratuity and a premium orchestra seat to “Not by Bread Alone”. Reservations can be made by calling 212.488.1505, Monday – Friday, 10:00 A.M. – 3:00 P.M. For existing “Not by Bread Alone” ticketholders ($40-$75), upgrades to include BlackOut can only be made at 212.488.1505.

Dining in the Dark at Nalaga’at