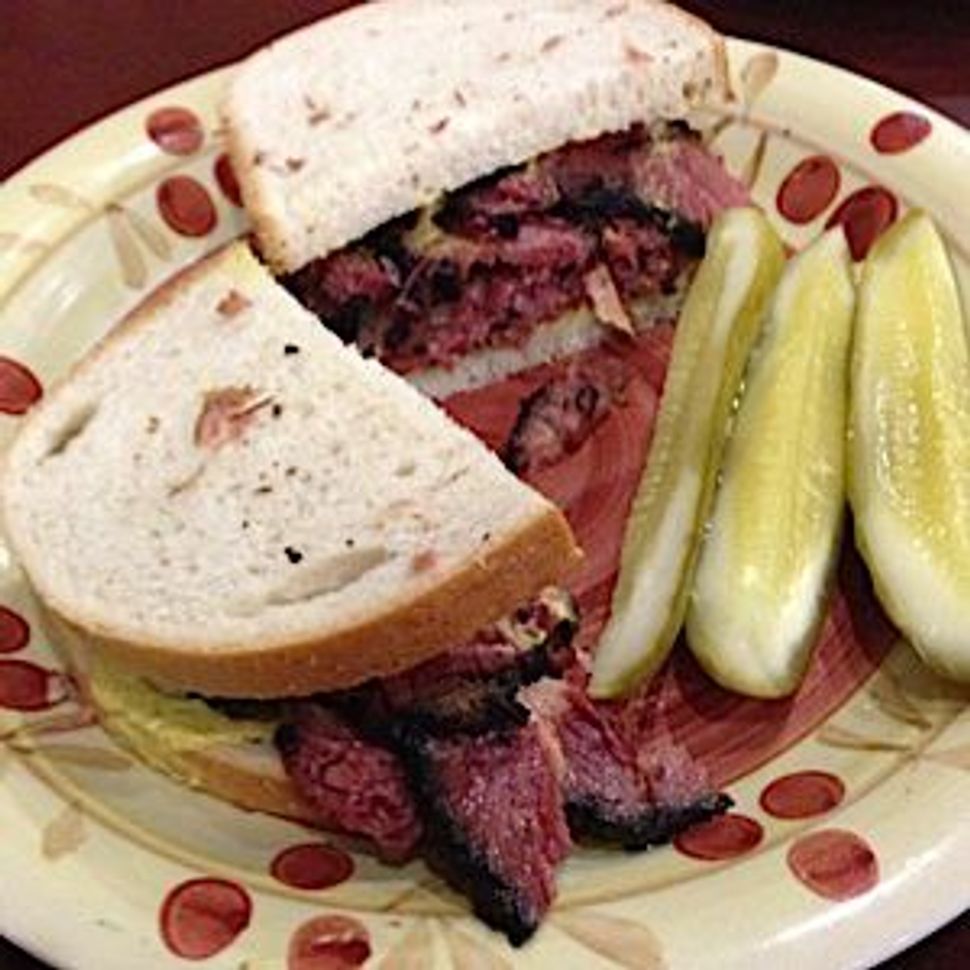 The perfect pastrami sandwich is the New Yorker’s holy grail. It’s a relatively simple combination: Fatty, juicy pastrami spiced with a small dollop of brown mustard and contained within two slices of mild rye bread, served ideally with a pickle spear. And yet, the search for the best corner pastrami sandwich has spawned as many culinary battles as the eternal hunt for the superior slice of pizza. David’s Brisket House, a Crown Heights mainstay that has been slinging deli meats since the 1970s, has long been on the short list for the pinnacle of pastrami achievement.

David’s Brisket House was founded to serve the then-predominantly Jewish neighborhood it was situated in. The old story of gentrification lines and neighborhood change landed David’s smack in the middle of a predominantly Caribbean area. The restaurant changed hands over the years, closing for a despairingly long time in 2010 before reopening with interior improvements in 2012. The owners now are Yemeni Muslims, who serve up the spirit of the old Jewish deli along with every sandwich. It’s the zany kind of fusion that happens naturally in a place like Brooklyn: non-kosher Jewish comfort food preserved by Middle Easterners sold to Haitian immigrants.

After some 30 years doling out sandwiches, the original David’s Brisket House has opened an outpost on Bay Ridge’s bustling Fifth Avenue. The new David’s boasts many of the same charms as the original, and much the same menu in a venue roughly twice the size of their Crown Heights location. The décor — down to the forest green paint to the glazed brick walls — is a slightly spruced up version of the flagship. More seating space makes the Bay Ridge David’s more of a sit-down place and less of a deli counter, but you don’t come here for the atmosphere.

Nor is David’s a place for the kosher, healthful or vegetarian inclined. The choices are pastrami, corned beef, and brisket in any combination you could possibly want — with a side of toothsome coleslaw or some so-so French fries, if you’re so inclined.

The menu also features standard grill fare like hamburgers and grilled cheese sandwich, but these are paltry offerings compared to the pastrami. A small sandwich goes for $7, and features buttery, salty sliced pastrami piled ludicrously high on any bread you please. (But choose the rye — it has just enough bite to counter the fattiness of the main event.) Medium and large options could feed a small family, or at least an extremely hungry teenager. A terrifying item called Three the Hard Way, $23, combines pastrami, corned beef, and brisket onto a single very large sandwich, is free if you finish it in nine minutes or less.

The corned beef errs on the lean and dry side, and the brisket is variable. On one occasion, it was oily and lackluster, another, sumptuous and tender. Skip the gravy, which is too thin and sweet, and go instead for the spicy mustard. If the original David’s is legendarily spotty in the service department — any pilgrimage to obtain a sandwich past noon, and they’re likely to have run out of one ingredient or another — the Bay Ridge location is eager to please. On a recent visit, the counterman delivered sandwiches to the table on china plates with a smile, encouraging his patrons to try the cream soda with their meal. And extra pickles? No problem. Cheap, tasty, and filling: In the pastrami Olympics, the new David’s has to be a medal contender.