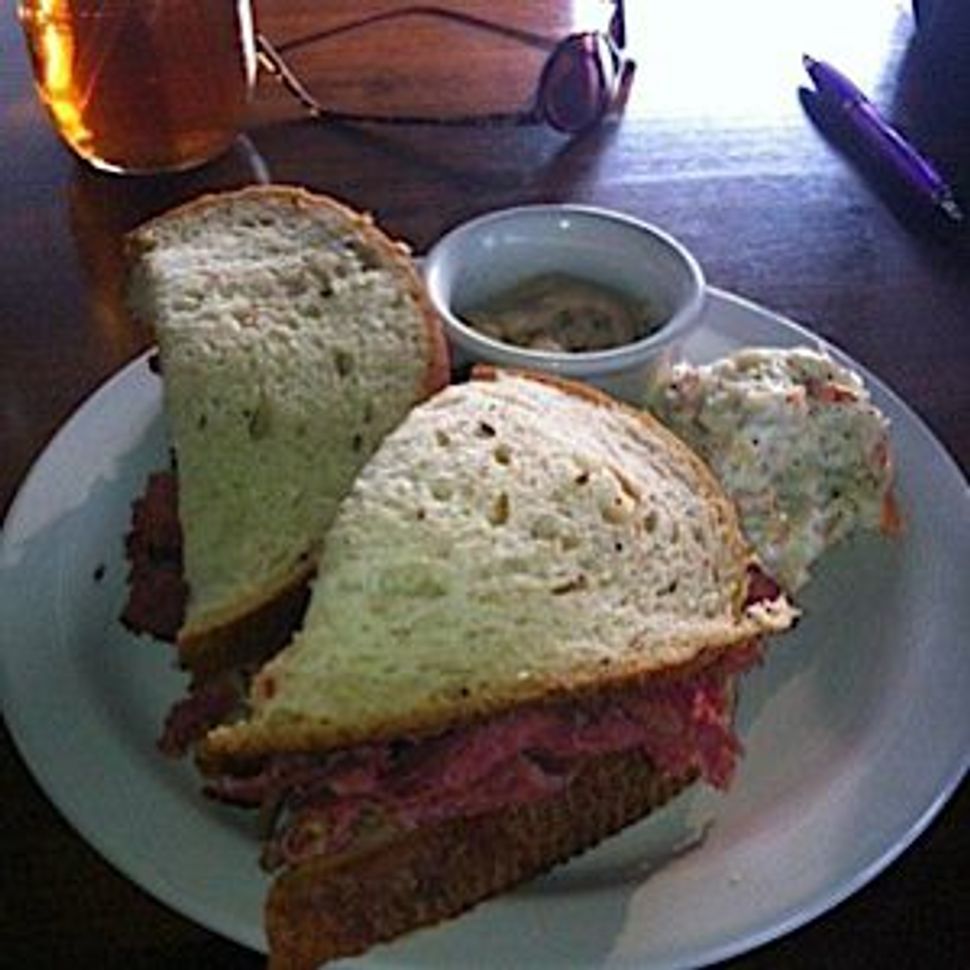 As a New Yorker who moved to northern Utah almost 30 years ago, I’m sometimes tempted by local restaurants that offer what they refer to as “authentic New York fare.” Shops that sling “New York” pizza, serve a Big Apple-style cheesecake and worst of all, a Jewish deli sandwich, often disappoint.

So, when I recently read an exceedingly laudatory review of the new Feldman’s Deli in the local alt-newsweekly City Weekly, I was pretty skeptical. It seemed too good to be true, and after all, I condescendingly thought, what could a Utah food critic really know about Jewish deli food?

But given such a glowing report, I knew it was only a question of time before I’d make the 45 minute drive to Salt Lake City to try it. So on a smoggy January afternoon, I headed south with my dear friend and fellow zoology professor Bob Okazaki to introduce him to what I was hoping was an acceptable sandwich. A California émigré who has lived and travelled all over the planet, he has never had a Jewish deli sandwich — more than my individual satisfaction was riding on this adventure.

After a bit of driving around, we found Feldman’s Deli, which is located in the Sugar House section of Salt Lake City close to the state’s largest synagogue, Congregation Kol Ami. In place of a traditional tiled floor and New York kitsch, the space is decorated in a Western Americana style — high open wooden ceilings, faux white antler chandeliers and trophy mounts on the walls.

But enough about the décor, I was eager to taste the goods — the true measure of a deli. I ordered a combination corned beef and pastrami sandwich on rye with cole slaw on the side, while Bob went for the Reuben with potato salad. It was relatively uncrowded, and after introducing ourselves, we were joined by Mike Feldman himself who together with his wife Janet owns the deli.

From the first bite, I was transported to Jewish nirvana or maybe the Lower East Side. His corned beef is succulent and just thinking about it now makes me want to have another bite. It tastes like home — and it should. Mike has it shipped in from New York and then slices it to order. The meat is served on authentic rye, which Mike tells me is harder to find out West than you might imagine. His wife Janet comes from a long line of professional bakers and makes fresh bagels daily the way they must be, by boiling them first.

Mid-conversation, Bob and I switched sandwich halves, and while the Reuben was definitely a work of art, I enjoyed my favorite combo more. (This is likely due to a couple of irrational prejudices. First, I do not like deli sandwiches that are toasted. But more importantly, my mother’s maiden name is Rubins, and it used to bug me that the Reuben sandwich’s title seemed to be misspelled.) But for Bob, it made his first New York-style Jewish deli experience.

From this New Yorker’s often jaundiced perspective, I have to say that this place is a must. It is a real taste of what the finest New York deli was and is all about. This is from someone who frequently stopped at Surrey Deli on the way home from school, and lost his high school ring in a pickle barrel during a stint working at Hillside Deli. I’ve made pilgrimages to the great delis in Manhattan, and will be making many others to this excellent new shrine here in the capital of the Mormons’ Zion.