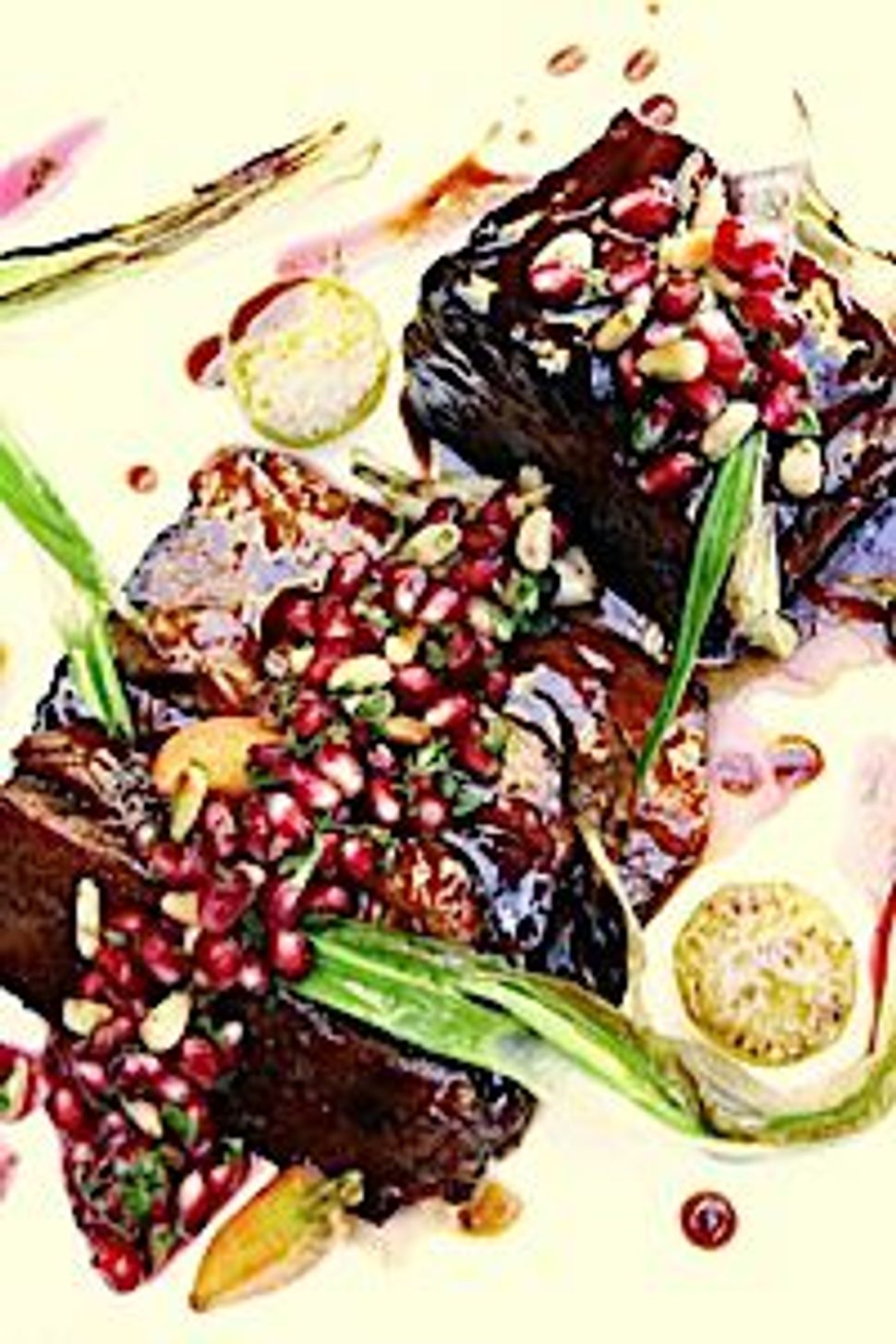 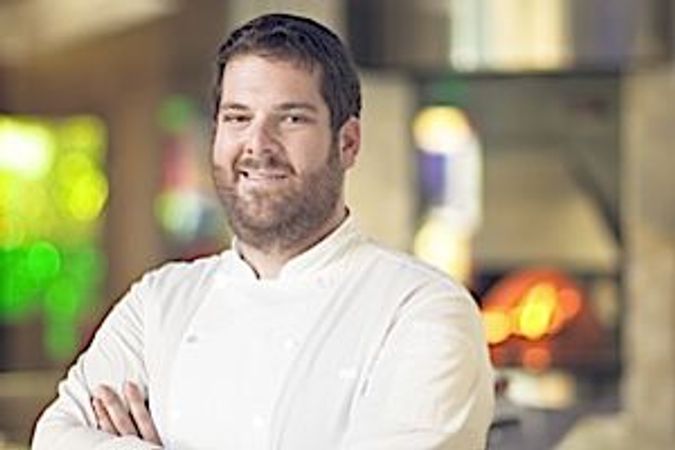 This Sunday night, rising star chef and member of the tribe Micah Wexler will face off against Master Chef Bobby Flay on The Food Network’s “Iron Chef”. We caught up with the popular L.A.-based chef to get some cooking and restaurant advice, a recipe for pomegranate brisket and to find out if he really will appear on “The Bachelor”.

How did the “Iron Chef” team find you?

The producer came into Mezze, my first restaurant, and really liked the food. He asked to meet me and then asked if I’d ever considered doing the show. When I was younger, I imagined it, but I hadn’t thought the opportunity would come about at this point in my career. He came back 6 or 7 times and then he invited me to be on it.

What is the penalty for telling us about the show before it airs?

A million dollars. In fact, they make everyone who is in the audience sign a non-disclosure agreement. When my episode was taped, my sister Miri was in the audience, and like everyone else, she had to sign an NDA. Shortly after, I talked to my mother and she knew all this stuff about what happened and I called up Miri and said, “Didn’t you sign one of those papers they passed out?” And she said, “Yes.” And I said, “Didn’t you read it?**!” And she said, “No.” I made sure neither of them said anything to anyone else.

Do you have any advice for Bobby Flay?

He’s done well for himself, so he should be the one giving me advice.

Other than the show, what are you up to these days?

I am working on opening a new restaurant. I am shooting [to open] sometime in 2013. And I’ve been trying to learn how to make my own cheese.

Let’s talk about Jewish food. What’s the most interesting Jewish food you make? 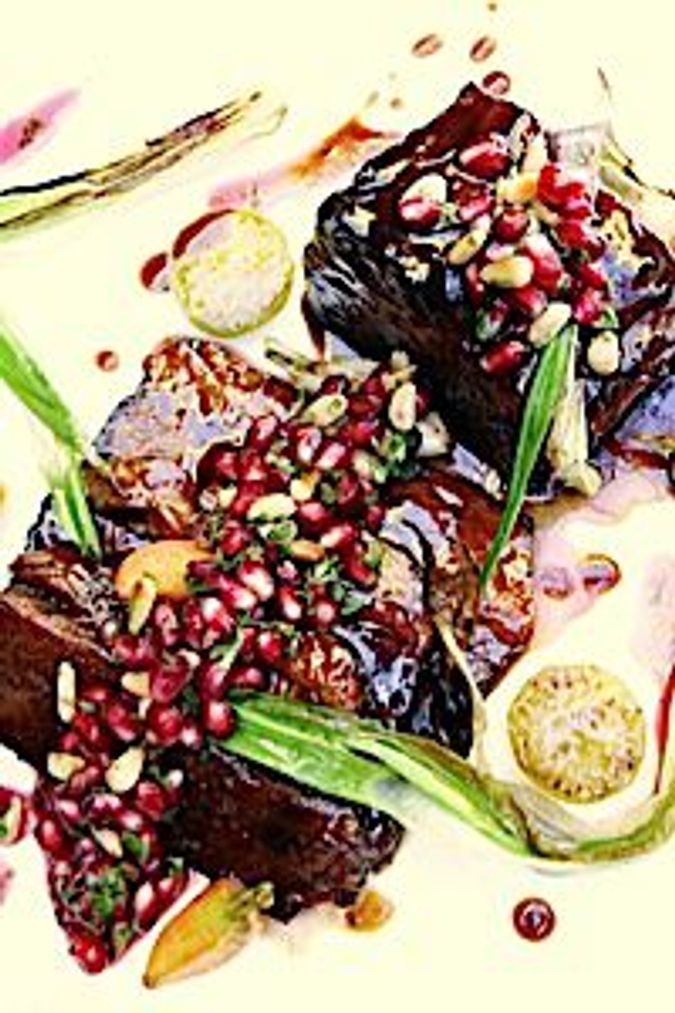 Do you eat mustard on your knishes?

Yes. I make my own mustard. Sometimes I eat them with Caviar, which is great.

What is the jelly served with gefilte fish called?

Yuch. My cousin Bessy, who is now 87, taught me how to make gefilte fish and taught me extensively about the Yuch. You have to know how to make it. People who aren’t Jewish think it’s disgusting, but you have to eat the homemade kind. You can’t put that cat food stuff that comes in a jar.

What is the best deli in L.A.?

Langers. They make the best pastrami you’ll taste anywhere. They slice it by hand. Everything they make is perfectly seasoned, perfectly cooked.

What is the best Israeli restaurant in L.A.?

If you had to add one thing to the Seder plate, what would it be?

Mint. It could represent the freshness of the Jews.

Is there any truth to the rumor that you’ll be going on “The Bachelor” next?

No truth to that.

1) Clean brisket of any silver skin or excess fat. Season brisket with salt and pepper and sear in a hot roasting pan until browned.

2) Cut up the vegetables into large pieces and place around the brisket. Allow vegetable to cook for 3-5 minutes. Add all the wine and all but 1/4 cup of the pomegranate juice. Add bay and thyme, cover with aluminum and braise in a 350 degree oven for 3.5 hours or until tender.

3) While brisket is cooking, combine chopped parsley, pine nuts, olive oil, lemon zest and remaining pomegranate juice and hold to the side.

4) For the last half hour of cooking, remove aluminum from brisket and allow to brown while glazing with the juices every 5 minutes. When brisket is ready to be served, slice and place on a large platter. Spoon over the vegetables and pan juice and top with pomegranate/pine nut gremolata.