When Bakers Do Matzo 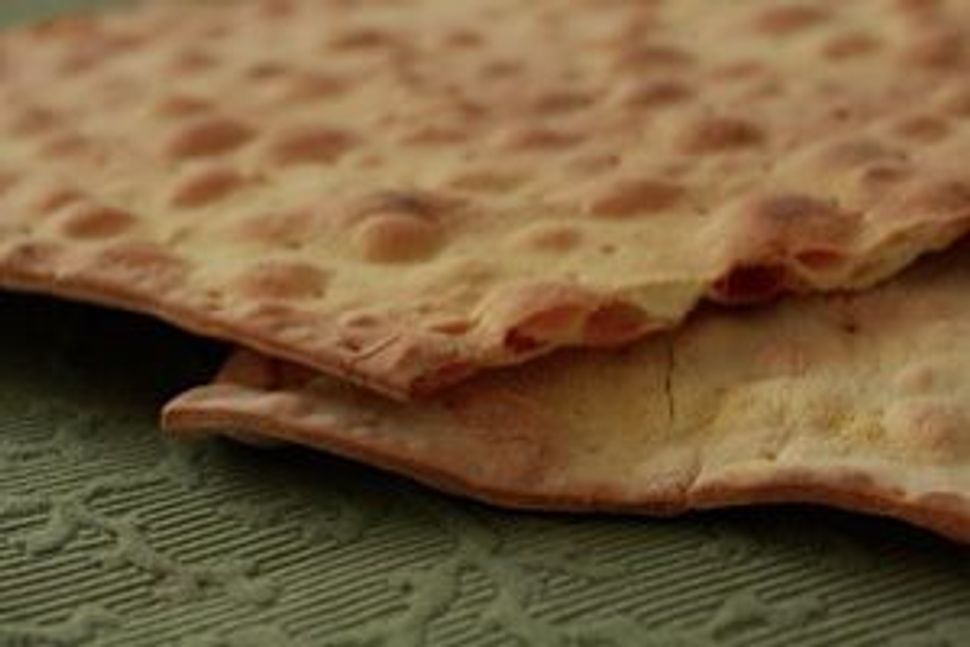 Matzo’s known as the “bread of affliction.” And — truth be told — some boxed matzo lives up to the moniker.

But more and more chefs and artisan bakers are creating their own matzos, bringing a homegrown twist to the ultimate Passover food — and, in a way, taking matzo back to its DIY roots.

“Manischewitz is made by machine, so after they put the ingredients in the mixing machine. Hands do not touch the product until after it’s baked,” Fiorentino told the Forward in an e-mail. “Our entire process is hands-on from start to finish, as we’re making a more artisan-level quantity. And while matzo in a factory bakes at around 900°F, my ovens only get up to 500°F. So while theirs bakes in about 32 seconds, ours takes about 5 to 7 minutes.”

What’s a perfect matzo? “It’s light and crispy,” Fiorentino says. “The ‘bubbles’ on top should be brown in color in contrast to the rest of the bread, which should look only slightly baked.”

James Barrett, co-founder and owner of Philadelphia’s Metropolitan Bakery, which makes their own matzo. agrees. “The first thing I check is the appearance. Does it have that rustic caramel coloring/tone from going into high-temperature oven? Any blisters?” he says. “Then once I crack it open, I listen for the sound, and as I taste it, I check out the crunch and flavor. The crunch is very different. Our matzo crackles.”

Considering the limited ingredients involved in making matzo — kosher recipes call for just flour and water – how much room is there for creativity? Plenty, says Barrett, though he acknowledges that flouting kashrut offers latitude.

“Not being so caught up in Jewish law, and having a background as a chef, has been very helpful,” acknowledges Barrett, who was raised in a non-Jewish home the heavily Jewish area of Northeast Philadelphia. When a neighbor served him matzo as a kid, he was blown away. Metropolitan has also introduced flavored matzo – a first, according to Barrett. This year, onion/black pepper will join Metropolitan’s popular lineup of plain, sesame, black olive/rosemary, sun-dried tomato with parmesan, and roasted garlic flavors.

Boulud’s Fiorentino, likewise, was raised Catholic, and never even baked matzo until taking the Daniel gig 10 years ago.

“I don’t have any childhood matzo memories to share, but when I began making matzo here, a regular patron of ours who is ‘of the faith’ thought my recipe and technique needed a bit of work,” Fiorentino told the Forward in an e-mail. “He suggested that together we visit a matzo factory and get a tutorial to improve upon the recipe. The owner of Streit’s matzo factory on the Lower East Side took us right in and shared his time-tested tricks of the trade.

“I took the tips back to my kitchen and adjusted recipe and process — now I roll the dough through a sheeter to flatten it out, cut out squares with a pizza cutter, and bake in a deck oven at 500-525ºF,” Fiorentino says. “While the result is a very different product than what you’ll get from the big producers, it’s a product we’re happy with.”

His secret for revelatory matzo: “There is no secret! Matzo is actually very easy to make, and keeping it simple yields the best results,” Fiorentino says. “I use just four ingredients: flour, water, canola oil, salt. Nothing more. The trick to getting the right dough consistency and malleability is to make small batches — this creates a dough that rolls out more easily.”

Metropolitan’s Barrett throws in a baker’s-secret twist. “I add a touch of durum flour,” says Barrett, whose company now sells more than 4000 sheets of matzo through the holiday. “I find it helps make it sturdier for transportation, it also increases the crunch factor.”

At Brooklyn’s Mile End Delicatessen, owner Noah Bernamoff says “good flour” is the only “secret ingredient” to great matzo. “It needs to be crispy, not just crunchy, with a lightly salty flavor,” he told the Forward.

Mile End, which is limiting matzo production to catering clients as it continues to rebuild from Hurricane Sandy, doesn’t see a huge demand for matzo anyway, Bernamoff says.

“Given our customer base, there is fairly low demand,” he says. “Most of our customers will eat matzo at the seder, but not refrain from eating leavened foods throughout the entirety of Passover. I would estimate, aside from our catering clients, that less than 5% of our customers in the store request matzo instead of bread.” Still, when they do request matzo, they won’t be getting anything like the boxed stuff we know as matzo.

When Bakers Do Matzo