Gourmet Kosher, at a Farmers’ Market Near You 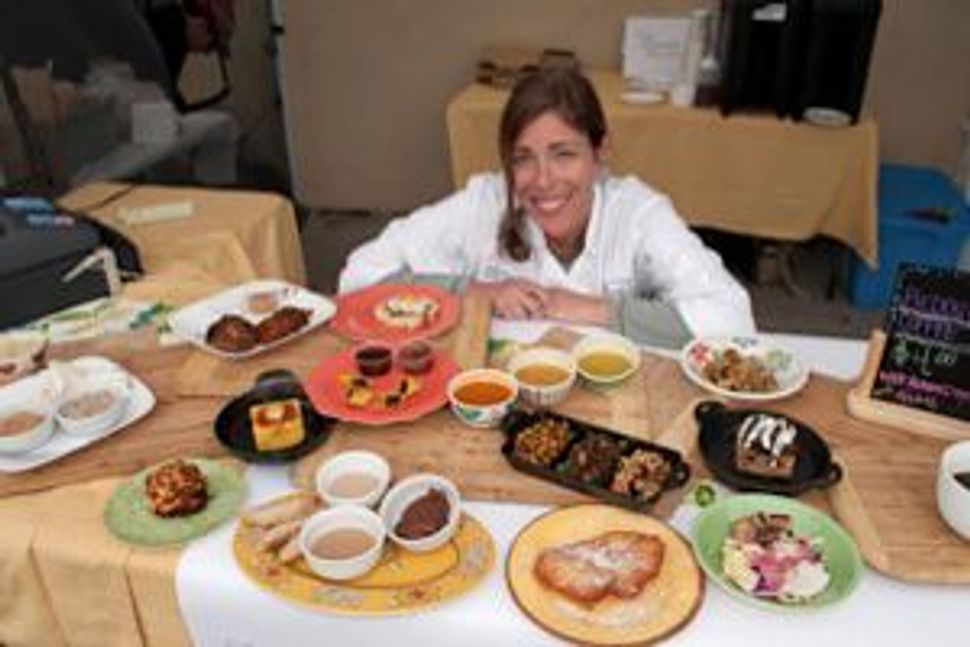 Image by Courtesy of the Kosher Palate

Her food truck, Hannah Leah (named for her two grandmothers), sells vegetarian and vegan twists on traditional Jewish food for market goers to snack on or take home.

“I’m focused on broadening the palate of kosher eaters by introducing them to world cuisine and new culinary trends and techniques,” Grant explained. “But I am also trying to remove the stigma other people associate with glatt kosher food, to get people to stop crinkling their noses at the mention of it.”

Her “Ish-knish” is made with whole grain dough with squash or sweet potatoes mixed in. The filling contains roasted mushrooms, caramelized onions and a tapioca-based cheese substitute. She makes a matzo brie kugel topped with a sweet Sephardic eggplant sauce drizzled with a tofutti cream on top. “People taste the eggplant sauce and think it’s made from figs or quince,” Grant said.

Co-founder The Grilled Cheese Truck,, Grant knows what it will take to keep her new truck running, but she wasn’t always a food-world wiz.

Grant, 46, started her career working on movies. When she was working as assistant director on “The Wedding Singer,” she sustained a serious head injury in a fall. “I literally and figuratively relearned balance and saw the world in a different way,” Grant said. “You get one body per lifetime and it’s all about how you nourish it.”

Although she had no formal training in cooking, ditched her movie world job for a spot in the kitchen. She combined her interest in food and wellbeing with recipes and techniques learned in her mother and grandmothers’ kitchens to create her unique culinary style.

Her version of the popular Israeli shakshuka is an ode to her Romanian grandmother. She serves the tomato-based stew in a bowl of baked mamaliga (a Romanian yellow maize porridge akin to polenta) and tops it with a coddled quail’s egg instead of a poached hen’s egg. And her “meshuga breakfast biscuit,” combines layers tofutti sour cream, homemade zhug (Yeminite hot sauce, which she makes without oil) and a fried quail egg on top of fried donut dough.

While Grant, attended Jewish day school growing up, she’s not Orthodox or a strict observer of kashrut in her personal life. It was an invitation to a Purim seudah (festive meal) at the home of an Orthodox family six years ago that set Grant on her path toward The Kosher Palate. “I brought salad ingredients from my garden and the farmers market, including onion and garlic flowers, and made the salad at their home using their kosher utensils,” she recalled. “None of the women with me in the kitchen had ever heard of eating a flower. I watched them eat this kind of food for the first time and it sparked the idea for my business.”

Grant is ultimately aiming to open a The Kosher Palate shop stocked with kosher specialty items and her fresh prepared food. She likened her vision of the store to a glatt kosher Dean & DeLuca and suggested that at that point she might branch out to milk dishes and meat dishes, as well.

“At the heart of kashrut is the idea that you are what you eat, that you know where your food is coming from,” she said. “Food has sacredness in it. It’s that spark of life when it’s fresh from the field and has maximum nutrients. To me, that’s what it’s really all about.”

Gourmet Kosher, at a Farmers’ Market Near You