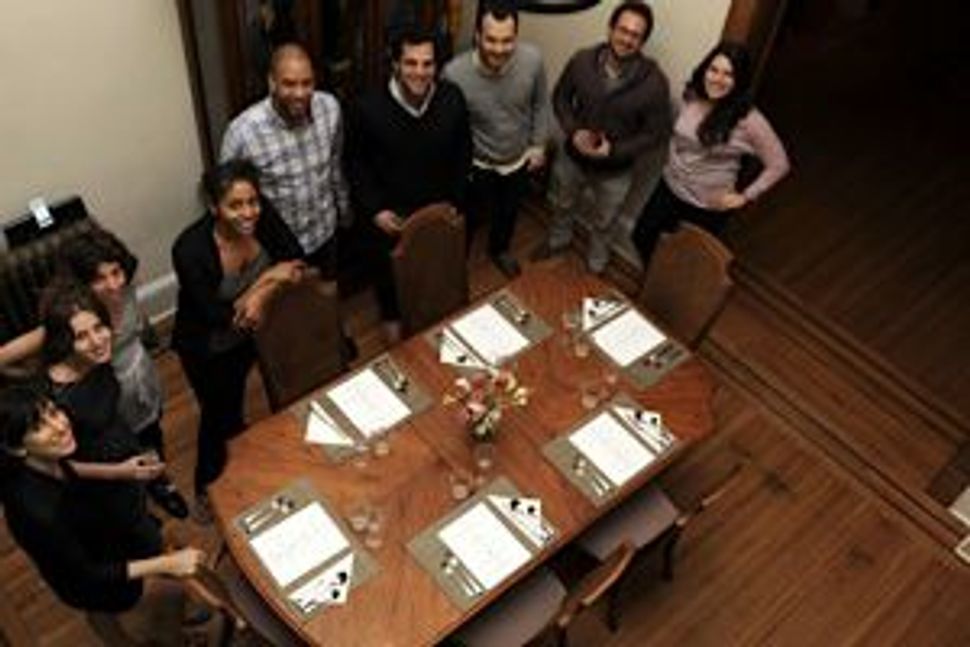 Image by Courtesy of Feastly

After living in Israel for several years, Noah Karesh, 30, returned to live at the Moishe House in Washington D.C. It was there that he helped cook regular dinners for 50, and realized the power that the dinner table can have on forming relationships. His business partner, Danny Harris, 33, grew up in a mixed Sephardi-Ashkenzi home in New York where many stories and traditions were transmitted around the dining room table.

Now they’re parlaying those experiences into Feastly, a website that connects adventurous eaters with chefs who want to test recipes and hone their skills at dinner parties in their homes.

So far active in Washington D.C., New York and the San Francisco Bay Area, Feastly may be coming soon to a city near you. But it all started with a dinner for 25 people where Harris’ mom cooked a feast of Libyan Jewish dishes.

How did the idea for Feastly first come about?

Noah was traveling in Guatemala with his girlfriend, and surprisingly, was not able to find local food when passing through Lake Atitlan. He convinced a local avocado seller to invite them for a home-cooked meal, and it was there that he had the “a-ha” moment. He thought that anywhere you travel, you should be able to meet local people, eat local flavors, and have a genuine and authentic experience.

How did it start?

The two of us went together to Start-Up Weekend D.C. in November, 2011. Within those 54 hours, we built the framework and team for Feastly. A month later, my mom, as especially loving Jewish moms tend to do, came down from New York to cook our first meal. We invited 25 people, and my mom, a Jewish refugee from Libya, cooked some of the traditional Libyan Jewish dishes.

What was on the menu?

My Mom prepared bureke, which is ground meat, potatoes and eggs wrapped in lumpia [An Asian appetizer usually in fried dough]; mafrum, which are meatballs with spices stuffed inside onions and artichokes; pickled spicy vegetables; couscous; assorted salads; mint tea, and a series of desserts with rose water, honey and marzipan.

For most Feasters, this was their first experience with this kind of food, as well as learning about the cultures and traditions of the Libyan Jewish community. And it was a wonderful experience for me to put my Mom and her food in the spotlight. She loves cooking and sharing her culture, but didn’t have an avenue to share it with a larger audience before Feastly. Now, she has hosted a number of meals, had one dinner written up by a food critic in the Washington City Paper, and even made some money. Food editors don’t just show up at your Passover or Shabbat dinner.

What’s the philosophy behind Feastly?

In today’s world, you may have 5,000 friends on Facebook or 100,000 followers on Twitter, but at the same time, you may find yourself eating dinner out of a soup can by yourself on your couch. With Feastly, we’re creating a canvas where people can offer and attend food experiences that share delicious food and connect Feasters with each other around the table. As we like to say at Feastly, we believe that the dinner table is the optimal social network.

How does it work?

It’s a double-sided market. On our side, you could be anything from an amateur cook to a professional chef. We have what we call cook spotters in the cities where we’re operating. The cook spotter interacts with the chef, learning their background, talking them through the process, and sharing our guidelines. Once they join, they put up their own food experience, and set their own price. We’ve had everything from an ice cream tasting for $8 to a multi-course meal for $100 dollars. On the Feaster side, we have users sign up from all around the world, but are currently only hosting meals in the Washington DC, New York and San Francisco metro areas. Feasters in these cities get weekly emails detailing upcoming meals and are invited onto our site to learn more.

How do you make money?

We take a 20 percent service fee on every meal, which we split evenly between the chef and Feaster.

How many meals have taken place so far?

We’ve hosted over 150 meals for 1200 plus Feasters in three cities. Meals average about 12 people per meal and $38.50 per person. Increasingly, we are hosting meals in partnership with everyone from Airbnb to American Express to TED to local farms and non-profits who see the incredible marketing, fundraising and community-building opportunities around the dinner table.

There is an Israeli site called EatWith doing pretty much the same thing you are. Are you working together at all, or do you consider them competition? There are actually a number of sites around the world working in this space and we are inspired by all of the attention now to food sharing. Just as Airbnb has allowed us to monetize your bedroom, Feastly is allowing you to monetize your kitchen.

Tell me some success stories.

One of our chefs just won “Chopped” on the Food Network. We have had chefs featured on the cover of the Wall Street Journal and in other publications, including NPR, FOX, Huffington Post, New York Post, and others. Most importantly, we’ve creating this incredible opportunity for chefs to grow a brand, explore their love of food and monetize their passion for cooking and hosting. Now, we have lawyers by day who host Feastly meals at night and on the weekends.

Given that opening your home to strangers leads one to think of the potential danger, have any bad things happened?

Through Feastly, we have created a strong and committed community of chefs and Feasters who look out for and support each other. If a chef needs a hand in the kitchen, our Feasters have been happy to help. If it’s late and a Feaster has come to the meal alone, fellow Feasters offer to walk him or her to the metro. Of course, we have experienced challenges, but the table tends to correct itself. At one dinner, a recently broken-up couple came with their new significant others, not knowing the other was going to be there. They simply sat on opposite sides of the table and still enjoyed themselves. For the most part, though, we’re seeing really positive things happening, and our chefs are getting handwritten thank you letters, and Feasters are staying after the meal to help with the dishes.

Have you thought about specialized dinners? I imagine this could really take off in the kosher market, even for Shabbat dinners, especially since people pay in advance.

We’ve been really thoughtful about creating a canvas for people to host any type of meal they’d like. This past weekend we featured a meal called “Oy Caramba,” which was a Judeo-Peruvian Passover meal. We see Feastly as a great tool for all communities to leverage our platform to support religious, cultural, business, non-profit and other causes. Specifically, we would love to see more chefs host meals around Jewish holidays, Shabbat or with kosher cuisine to target the incredible demand we’re seeing.

Who have been attending these dinners?

We see everyone from parents coming with children to singles to couples celebrating an anniversary around our tables. Not surprisingly, we get a lot of singles who see Feastly as a great way to meet other people. Whether romantic or platonic, we see and hear about a lot of connections happening around our tables.

What are your plans for expansion?

Our goals are to be everywhere with Feastly. We hope that anywhere you live or travel, you can find a Feastly meal and connect with other people around the dining room table, have meaningful discourse around delicious food… We’re getting emails daily from people all around the world who are asking when we’ll be in their cities. Just today, we got an email from Indonesia inviting us to open up there. We’re inspired to see this incredible desire and are working to expand. I know that Noah is especially excited about bringing Feastly back to Atitlan, Guatemala.

Feastly resonates so much for me because of the wonderful connections and history that come from food and gathering around the table. Whether you celebrate Shabbat or regularly host or attend dinner parties, the table creates community and passes down tradition. Now, people are so incredibly connected to their food and even know the background and pedigree of their broccoli. At Feastly, we want people to be just as mindful of how and with whom they are eating as they are of what they are eating.

Alix Wall is a food columnist for j. weekly, a freelance writer and personal chef theorganicepicure.com in the San Francisco Bay Area.