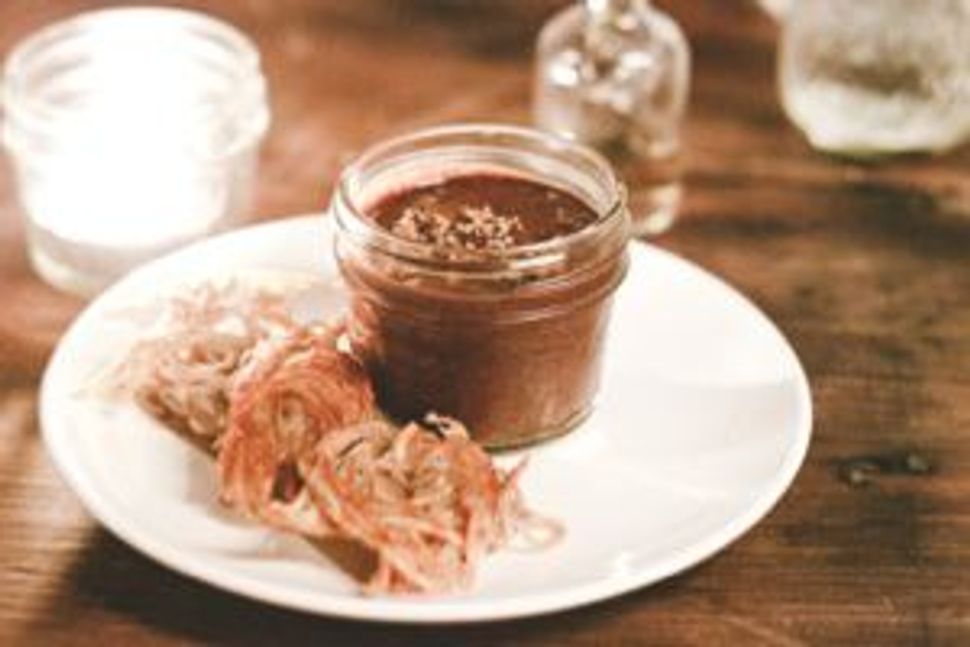 Bite-sized latkes are served for dessert with chocolate mousse for dipping. Image by Molly Yeh

“I’ve wanted to be Jewish since I was 6-years-old,” said Sarah Simmons, founder of the culinary salon City Grit, which hosted a four-course Southern Shabbat meal last Friday. After tasting Simmons’ twist on brisket and latkes, one would believe her claim as being “the most Jewish Gentile in New York City.”

The meal was made up of fresh new takes on traditional Jewish dishes, with inspiration drawn from Simmons’ southern upbringing, Israeli cuisine, and seasonal veggies. It’s one of a few of Simmons’ reoccurring meals in City Grit, which she started in 2011 after hosting private dinners in her home for a few years and being named Food & Wine magazine’s Home Cook Superstar of 2010. Other meals in the salon include an evening of southern comfort food, a “Butts, Legs, and Sides” menu with Korean influences, and a series with guest chefs.

After an informal blessing over the challah, the first course was brought out to the 40 or so guests, which ranged from what appeared to be a group celebrating a bachelorette party to people who weren’t Jewish but love the cuisine. First up was Simmons’ take on the fattoush salad — a roasted beet puree, greens, and a buttermilk tahini made with benne seeds (sesame seeds grown in the South, according to Simmons). It was light, nutty, and refreshing. It had diners requesting more challah to sop up the excess beet puree on the plate.

Hummus soup was next on the bill. Essentially a thick chickpea soup, it was poured over a cake of herbed rice grits and short rib kafta. It was a few bites of flavorful, hearty goodness that served as a great teaser for the course to come.

Frustrated with cutting brisket (Simmons says she disliked how each slice comes out to a different size, how it’s difficult to get consistent cuts across the meat… all that mishegas) she developed her main course dish, brisket braised and then pressed into a cube. The result was delicate, juicy, easy to eat plate of meat — it almost didn’t need a knife. It came over a bed of spinach, pickled raisins, and morels, with soft Israeli couscous that had been tossed with ramp oil and leeks. What the brisket dish lacked in the richness you would expect from grandma’s brisket, it made up in fresh springy flavors and a pleasingly dainty texture. And rather than feeling the urge to immediately retire to the couch (as is the case with most brisket-y meals), Simmons somehow paced the meal to allow room for dessert. Inspired by that cult practice of dipping fries in a Wendy’s frosty, Simmons served bite-sized latkes fried to a crisp with a jar of rich chocolate mousse for dipping. It was a beautiful marriage of salty and sweet, crispy and smooth.

Overall, the meal was inspiring and delicious, the kind that makes you slap yourself on the forehead and ask why you didn’t think of it. It was a fun atmosphere that was a conversation topic in itself — an old Catholic school that is the WRK Showroom by day, selling hip clothes and vintage goodies. The old communal tables and chalkboard menu result in a feeling of being back in a middle school science class. Paired with food that’s the total opposite of anything you’d find in a middle school cafeteria, the entire experience is intimate and nostalgic.