Who Makes the ‘Greenest’ Dish in Jerusalem? 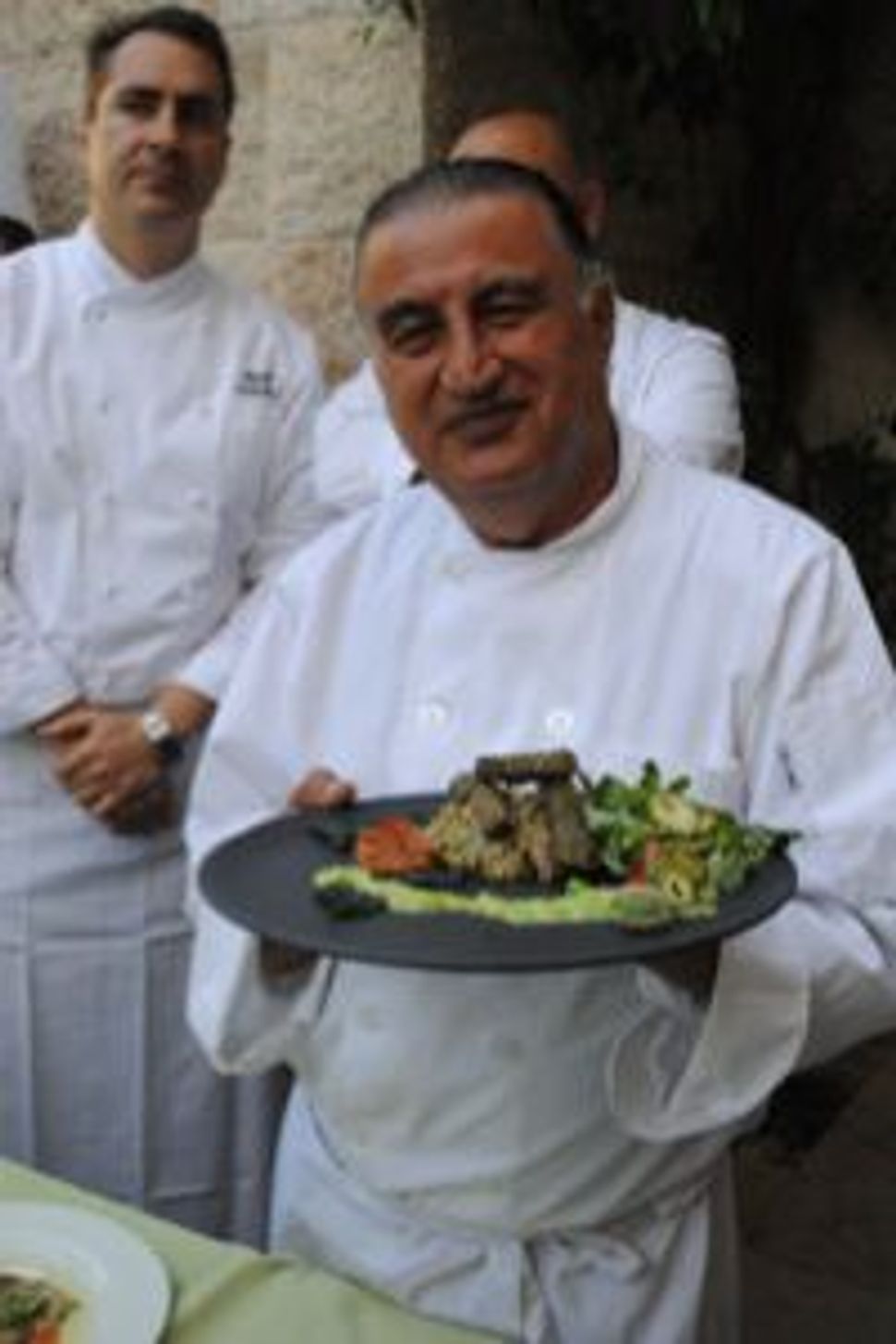 The drain on Jerusalem’s natural resources from religious tourism is finally acknowledged as an ecological dilemma. The Symposium on Green and Accessible Pilgrimage, which took place earlier this week, hopes to address it.

The brainchild of Jerusalem’s deputy mayor, Naomi Tsur, the mission is to bring religious leaders together in cooperation to help pilgrims “leave a green footprint” as they pass through Jerusalem and holy sites everywhere on the planet.

At the eco-focused event, eight local chefs competed for the city’s “greenest” dish. Well, perhaps competed is a generous term. The white-jacketed chefs assembling on the stone patio of the YMCA greeted each other with the big hugs and the macho kiss on each cheek that Israeli guys exchange to show affectionate respect.

In the background, sous chefs opened plastic containers, pulled out knives, and mixed sauces. Pungent herbal odors rose from bunches of sage, basil, and za’atar piled on a rough wooden chopping block. With the prep done, the chefs deftly created the dishes that resonate with “green cuisine,” placing a square of organic carrot here, painting a swab of turmeric sauce there, lightly dropping delicate green and black sprouts exactly on the right spot.

Chef Tali Friedman of Ha-Atelier, who runs a culinary workshop in the Machaneh Yehudah market, presented sea bass in a herb crust, with braised artichokes, fresh broad beans, peas, and fresh green almonds. An odd choice, as Jerusalem is a land-locked city. But the chef explained why she brought fish to a Jerusalem event where the issue is sustainability.

“I love fish best, but I’m sad to say that our Israeli waters are over-fished and emptying out….It would take at least three years of no fishing on our coast to restore Israel’s fish. The fishermen need a lobby and financial support, like the farmers get during drought years. We need experts in the field to provide solutions.”

I expected noted chef Moshe Basson’s dish to be multi-layered, with references to historical, Biblical, and seasonal local foods, including the foraged greens dear to the chef’s heart. I wasn’t disappointed. Stuffed Jerusalem sage, a wild green available for sale only from the Arab vendors who forage it, lay rolled up like grape leaves on a bed of freeki, smoked green wheat.

“Jerusalem Sage looks like a menorah when it flowers, and is also called “Moriah.” It takes me to Mount Moriah, where at the Damascus gate the women vendors sell this herb. My Arab colleagues in the “Chefs For Peace” group particularly enjoy freeki. It’s also the “take-away” food that young King David brought to his comrades in the battlefield.

“This is a springtime dish that includes a small salad of wild purslane and green almonds. The almonds also remind me of the menorah, as it’s written, “decorative knobs and flowers like almonds…”

Chef Moti Buchbut of the Inbal Hotel’s served up a “hamburger” of a Portobello mushroom stuffed with spinach between slices of Granny Smith apple and surrounded by a white wine sauce. “It reflects the fact that with very simple local ingredients, you can create a really special dish,” he explained.

So who won? Truthfully, the “competition” fizzled out, as the chefs and the audience clustered around the display table applauded every dish with equal enthusiasm. But judging by the long applause to Basson’s dish, with its layers of history, culinary wisdom, and locavore culture, was the favorite.

“Green” food, to the average Jerusalemite, means something like rice tinged green with lots of finely chopped herbs. The way of eating in Jerusalem is so rooted in traditional dishes created anew every day by skillful home cooks, that most people are eating green whether they care about the environment or not. It’s true that there are more and more stores offering organic produce. Awareness of eco-friendly and healthier eating is creeping into the Jerusalemite consciousness. But for the average, working- and middle-class family, the array of salads served before Shabbat lunch, the preference for eating chicken, and beef only occasionally, and desserts like date-stuffed pastries perfumed with rose water, are simply what people like to eat.

Israeli chefs, who not so long ago rejected the ethnic dishes their grandmothers served, have turned back to these culinary roots. Whether faithful to the traditional forms or becoming playful with them, Israeli chefs are shaping a new Israeli cuisine with big Middle Eastern flavors, and broadcasting its deliciousness to the world. That it’s a cuisine that loves its local, seasonal, climate-appropriate ingredients, is just a big plus.

Sadly, the chef gave no measurements, so use your own judgment. It’s all about the smoky grilled eggplant anyway, with seasonings to taste. I suggest starting with a tablespoon of each flavoring and adding more of whatever appeals to you by teaspoons.

1) Grill the eggplant over an open flame until it softens all over.

2) Using a knife, remove the peel but leave the stem end on.

3) Place the eggplant on a plate. Spoon tahini around it.

4) Drizzle the eggplant with olive oil, lemon juice and tomato juice, one after the other.

5) Spread the crushed garlic over the eggplant. Spoon yogurt over it. Season with salt and pepper. 6) Scatter the chopped nuts over all and serve.

Who Makes the ‘Greenest’ Dish in Jerusalem?