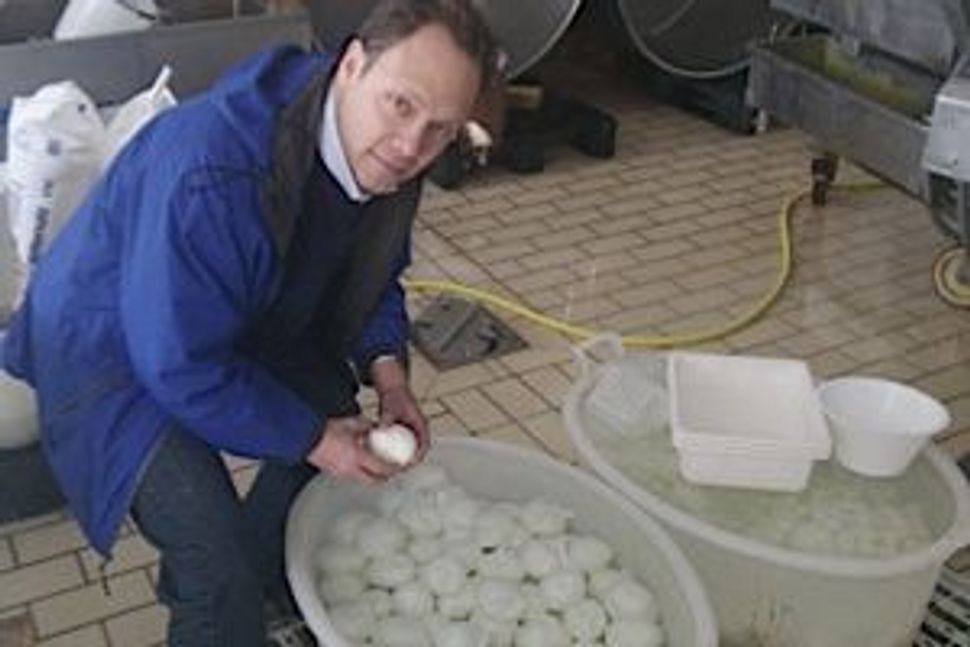 Image by Courtesy of Brent Delman

Cheese is the food of choice during Shavuot making it one of our favorite holidays. But, for those who keep strictly kosher, the cheese pickings have always been slim — mostly mild cheddars, mediocre mozzarellas and sometimes something that resembles parmesan. But, Brent Delman, aka The Cheese Guy is trying to change that.

A food importer and founder Old World Marketplace, Delman longed for quality cheese after finding religion later in life. His solution? Make his own. He is now one of only a handful of artisan kosher cheese producers in the country.

We caught up with him in Yonkers to chat cheese.

I like a new twist on the traditional, a blintz with a goat cheese and dried fruit and nut filling. Make your batter and fry your blintzes. Briefly allow fresh and creamy goat cheese to become room temperature and mix with sour cream to a creamy mixture. Add in chopped dried fruits like cranberries cherries or apricots and nuts like almonds walnuts or pecans. You can also add some citrus zest like orange. Put 1-2 tablespoons of the filling in your blintz and fold.

Before you started The Cheese Guy, what kind of high-end kosher cheeses were on the market?

There wasn’t a large selection of high end kosher cheeses. Whatever there was, was primarily in the specialty markets in Manhattan — a few goat cheeses, fetas and parmesans, and an occasional European import, but mainly basic American cheeses like muenster, mild cheddars and sliced mozzarellas.

Within kosher food itself, I was seeing an explosion. Suddenly kosher wine options were diverse and refined instead of merely syrupy. More and more kosher restaurants were trendy and full of ambience. And kosher food became a fusion of different cultures. It was self-aware, health-conscious, concerned with quality, presentation, and flair.

But, sadly, cheese was not a big part of this renaissance. Perhaps the heavy emphasis on meat meals for Shabbat and holidays allowed the typical kosher consumer to feel less invested in their cheese, and to shrug off the suspicion that kosher cheese did not even come close to the depth and richness of the non-kosher cheese out there.

But as a Baal Teshuva, I knew what we were missing, and I didn’t think it should be an obstacle in any spiritual path — or that anyone should be deprived. After trying to support the one kosher cheese line that had potential quality, we went our separate ways and I decided it was time, finally, to invest in my own line. And that is how The Cheese Guy was born.

What are your personal favorites?

My bastardo del grappo is made in the mountains of the Grappa region of northeastern Italy. Cow’s milk. Creamy, full flavor, in the family of Normandy Brie. Pecorino romano is a Hard cheese, aged over 2 years — fragrant, sheep’s milk cheese produced in Sardenia, Italy. It’s good for grating, and for risotto dishes. And my montaggio is exclusive to the kosher market. It’s a classic Italian table cheese, semi-hard, aged 3-4 months, made from the milk of grass-fed cows in the northeastern corner of Italy — the Friuli-Venezia Giulia region. It’s sometimes compared to a young Asiago cheese with a mild, delicate, and somewhat fruity flavor.

What’s the secret to a great kosher cheese?

All cheeses, kosher or non-kosher depend upon the quality of the milk that is used to produce the cheese. The flavor of the milk varies depending upon which type of animal, what the animals are feeding on, the health of the animals and how they’re treated, as well as the affinage [aging process] and other factors. Nearly all kosher cheese is produced with vegetarian rennet [the microbial-based enzyme that coagulates the milk into curds and whey], as opposed to rennet that is derived from the lining of a calf’s stomach. There is often extra cleansing and sanitizing of dairy processing equipment when kosher cheese is made and cut.

Where do you source out milk and other components?

I myself work with small dairy farms to produce my recipes — only at the very highest quality, or else I will reject a batch. And when the young cheeses are delivered to me, soft and mild, I nurture them as they age in my own cheese cellar. Coating them, turning them, brushing them with spices, salt, or olive oil, adjusting the temperature and humidity to simulate an ancient cave in the French countryside.

How do you think tastes have changed for kosher consumers? Has an exploding food culture shifted expectations?

Yes. There are now kosher celeb chefs and the kosher blogs have exploded. We are a very literate people and it’s natural that it has translated into communicating and sharing on the web. As funny as it seems, people stop me on the street or at events, and ask if I’m the actual “Cheese Guy.”