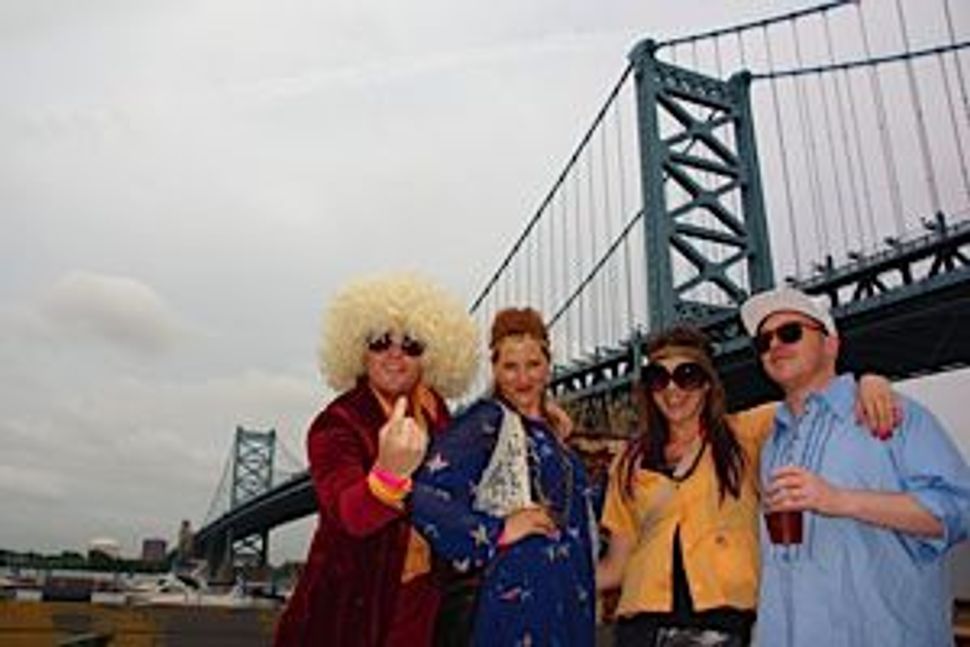 You might think wearing polyester on the first day of July would be a big mistake, and normally you would be right. But on Monday night, leisure suits, sequins and tube socks were all on proud display as Philadelphia’s most-popular “modern Israeli” restaurant, Zahav, kicked off its fourth-annual Down the Shore.

This year’s disco-themed event was entitled “Klezmer Inferno” and it more than lived up to its name, combining the Eastern European sounds of a live Klezmer band with the Burn, Baby, Burn! heat of an open-air, mid-summer disco.

Previous years have had Zombie Luau and Love Boat themes, but for this year’s Klezmer Inferno, Zahav’s James Beard winning chef Michael Solomonov stuck a bit closer to his culinary home. Recruiting some of the city’s best chefs Solomonov pitched the even as a European Jewish BBQ for disco-crazed diners, young and old.

As the weeks’ worth of storm clouds parted, if only briefly, over the City of Brotherly Love, disco kings and queens in giant wigs began to get down to the deep disco and classic funk coming from the DJ booth at Morgan’s Pier, a waterfront beer garden.

But some of the chefs, like Chef Lucio Palazzo, of La Calaca, seemed to lean more heavily on the inspired part of “Jewish-inspired BBQ.” His tangy, latke-inspired octopus escabeche on a thin potato garnacha was light and delicious, if not quite making the kosher cut.

Guests washed down all the goodness with beer and sangria from an open bar. The nectar-like white sangria, its frosty cup smoking in the summer heat, was a delightfully refreshing defense against the riverside humidity.

As partiers refueled for another round on the dance floor, a sword swallower took to the stage, dancing and feasting on her steely knives and three-foot long balloons while stilt walkers strutted and danced like ten foot tall Travoltas.

“You don’t get this in Virginia” said Craig Rogers of Border Springs Farm, a sheep farm in southern Virginia, gesturing toward the stilt walkers and sword swallowers. Rogers, who also has a stand selling his lamb in Philadelphia’s historic Reading Terminal Market, was on hand to roast a whole lamb with Top Chef’s Jen Carroll. Throughout the evening he offered chunks of moist tenderloin from the tip of his knife to spectators curious.

As the Zahav team unveiled their buffet, the West Philadelphia Orchestra began their march toward the stage, drums and brass calling everyone to attention. The eight-piece band played their ebullient brand of Balkan beats and jazzy brass tunes as party-goers dug in.

As the sun retreated and food gave way to more frolic, the dance floor got busy. Conga lines formed with guests, staff, and stilt walkers holding hips and pointing fingers to the sky as they danced under the tent. Uniformed dancers got down in front of the DJ booth, and yes, more balloons and swords were swallowed.

This summer marks the first time that the annual Down the Shore parties have been hosted somewhere other than Zahav’s Old City Philadelphia location.

“We ran out of space at Zahav and Morgan’s Pier is the coolest venue in the city” explained Chef Solomonov, in his disco-style oversized sunglasses, wide lapels, and polyester pants.

When asked if he could give any idea of what might be in store for Down the Shore 5, Solomonov replied “You’ll have to wait until next year.”