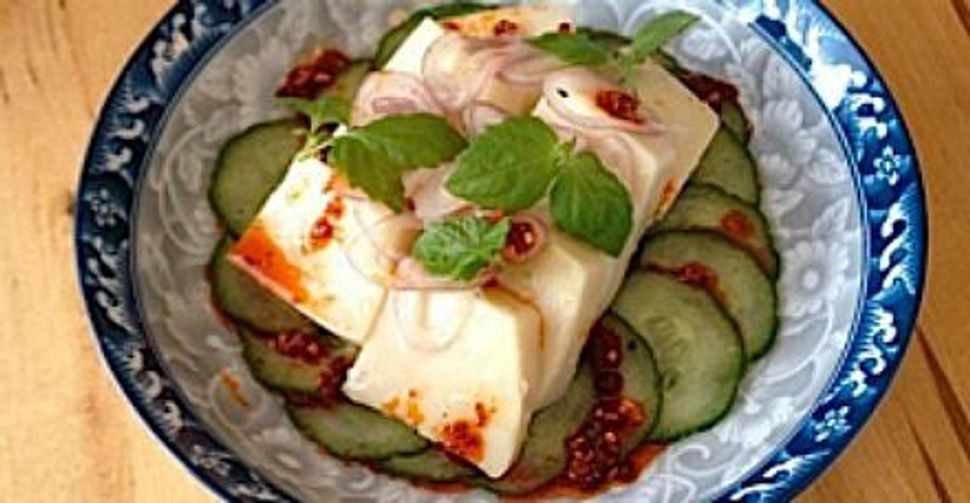 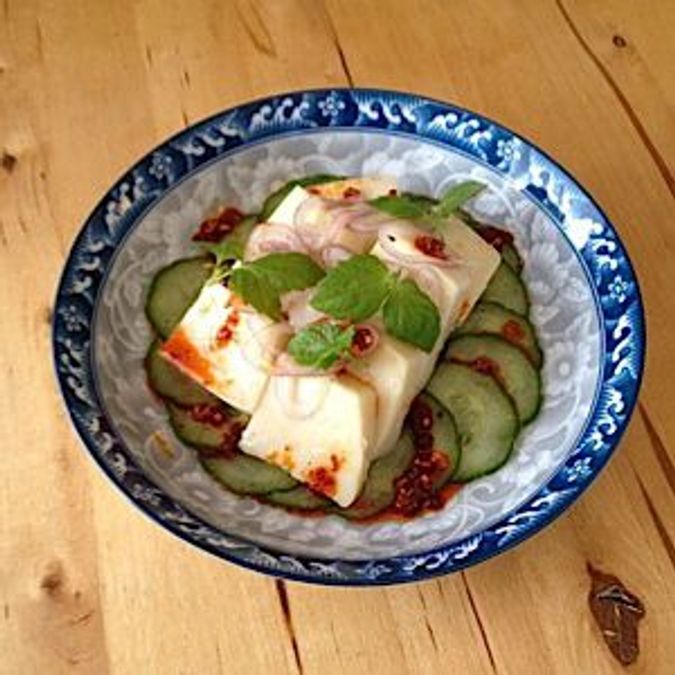 Blending Recipes: Jewish chef Aaron Israel and Japanese chef Sawako Okochi are combining their backgrounds in dishes like this chickpea tofu which is a play on falafel and tofu. Image by Courtesy of Shalom Japan

Jewish and Japanese food might not be the most obvious pairing, but two accomplished New York City chefs are banking on the fact that the two seemingly disparate cuisines will complement one another — just as they have.

Shalom Japan, an eatery set to open in South Williamsburg at the end of July, is a collaboration between chefs and real-life couple Aaron Israel (of Mile End Deli and Torrisi Italian Specialties fame) and Sawako Okochi (formerly of Annisa and The Good Fork. Micaela Grossman who Israel knows from Torrisi will be in charge of the space outside the kitchen — overseeing the front-of-house, service, and Shalom Japan’s cocktail and wine list.

New Yorkers are already getting behind the project. Shalom Japan recently kicked off a Kickstarter campaign to raise funds for “finishing touches” and reached their $15,000 goal and then some after just over a week.

We chatted with Israel, Okochi and Grossman about what’s in store at the soon-to-open restaurant, some common misconceptions about Jewish food, where they got the name Shalom Japan and matzo ball ramen.

Japanese and Jewish food aren’t necessarily a natural pairing. What makes you think the two cuisines are complementary?

Israel: It’s a true collaboration between me and Sawa, and we’ve spent a lot of time eating together and enjoying each other’s cultures. There’s also a lot of common ground. For example, if you go to a Japanese restaurant you’ll often have things dressed with goma, a sesame paste. When I first tasted it I thought it tasted just like tahini. That started a dialogue.

If you’ve ever made falafel, you know you soak the chickpeas in water and grind them up with spices and then fry them. If you’re making tofu, you soak soybeans in water too, and then grind those with the water and boil everything. It’s similar. We’re planning on making a house-made chickpea tofu with the liquid usually used to make falafel.

How did this idea come about?

Israel: It was kind of an organic process. Sawa and I had been talking about it for a while. We’ve grown together as people and want to share our passion together.

If there was one breakthrough moment, it was a couple of years ago when Sawa and I were in the library doing research for some supper clubs we were putting on. I saw mention of a kosher restaurant that was in SoHo in the 1980s called Shalom Japan. We thought, “If we ever open a restaurant we should call it Shalom Japan.” That restaurant doubled as a comedy/cabaret club and I don’t think it lasted very long. It’s such an outrageous idea, but so New York.

How would you define Jewish food?

Grossman: There are a lot of misconceptions about Jewish food — that it’s about quantity versus quality. There’s nothing wrong with a pastrami sandwich that’s as big as your head, but there’s more to it than that. In the way a lot of Italian-Americans have gone back to trace their roots and used seasonal vegetables and outside influences to do it… that’s what we’re going to do here.

Israel: I’ve explored a lot about what Jewish food is. It’s a complex answer. It’s really just food that comes from places where Jewish people have landed. There’s no reason it can’t be influenced by Japanese, or other types of cuisine. We’ll actually draw off all the influences in New York City.

I also think there’s a lot more attention to detail in Jewish cooking than people think. There’s the image of the bubbe who’s certainly got love in her food. And we want to get the love part down, but we also add in some technical expertise.

Sawa, how about you? How would you define Japanese food?

Okochi: One thing that comes to mind is seasonality and a focus on local products. Japanese food is really beautiful to look at too. I want to showcase all of those things.

Grossman: Also, there’s a deliberateness and attention to detail in Japanese food. It’s about the beauty of simplicity. It’s so elegant and refined.

Why did you chose Williamsburg as your location? Any connection to the large Hasidic community?

Grossman: All three of us are long-term Brooklynites, and we knew off the bat we wanted to be in Brooklyn. We kind of fell in love with South Williamsburg. There’s definitely a strong Hasidic community, but what we love is the diversity — Hasids, hipsters, Puerto Ricans and Dominicans. That’s what our restaurant is all about: Blending and celebrating cultures and riffing off each other’s cuisine.

What are some dishes we can expect to find at Shalom Japan?

Israel: One of them is the chickpea tofu I mentioned. Sawa makes a killer sesame vinaigrette to go with it. She’s also doing a pastrami-stuffed chicken. She makes this awesome cabbage and pastrami filling and stuffs the chicken with it.

Okochi: I’m also planning on making challah with sake kasu [what’s left after sake has been pressed out of the mash — a common flavoring agent in Japanese cooking] baked into it. You get some floral aromatics from that. I’m going to serve it with a raisin and sake butter.

Will it be kosher or kosher style?

Grossman: We’re not attempting to be kosher style with the menu as a whole, but so many of the dishes lend themselves to kosher-style eaters. We were recently going through the menu and noticed that we have a lot of naturally vegan and vegetarian-friendly foods.

Israel: We’re not going to make cholent out of pork shoulder or anything like that. This is about respecting cultures and exploring them. We’ll have pork on the menu, but that’s because there’s a great tradition of pork (and shellfish) in Japan.

What makes you think there’s an appetite for this?

Grossman: It’s the food we want eat. I think New Yorkers can read though phony and fake very quickly. I think what most New York diners are looking for are unique voice shining through. Obviously there’s the technical aspect, but because there are so many choices in New York, there has to be a reason you go to a particular restaurant, and I think what Aaron and Sawa are providing is a combined voice that piques peoples’ interest. People also want to know what these respected chefs are doing that is so personal.

Micaela, Jews aren’t exactly known for embracing innovative cocktails. Do you plan on using some of the traditional wines and alcohol in new ways?

Grossman: Without a doubt we’re going to mix the two cuisines through our cocktail list — we want continuity with the restaurant. I’m a yuzu junkie, love the acidity and bitterness it gives to drinks, so there’ll be a lot of that on the menu.

I’m also planning on embracing Manischewitz. I hadn’t had a sip of Manischewitz in forever, but I went out and bought some recently and realized it’s similar to cassis — so we’ll have a Manischewitz Kir Royale.

What are some of your favorite foods from each of the cuisines?

Grossman: I’m a noodle freak. Put a noodle in front of me, and I’m a happy girl, especially ramen and udon. When it comes to Jewish food, I’d say my favorite is sweet and sour stuffed cabbage. There’s also the process of making it that I love. I have a recipe and the measurements are a pinch of that, a cup of that. On a cold night, smelling that pot of meat and cabbage and tomato is amazing.

Okochi: I do love noodles, too. This is not a summer food, but I love Japanese hot pots. And when it comes to Jewish food, I have to say Aaron makes the best matzo ball soup I’ve ever had.

Grossman: I can vouch for that.

Israel: I really love Japanese food. Can I just say, her mother’s cooking? Her mom’s an incredible cook. She’ll brings out 12 amazing dishes all plated beautifully. I also really love a really great rice bowl, or chirashi. You can play with it — it’s just rice with fish, avocado and cucumber. Sometimes we do it with lox at our house, after my parents bring it to us for brunch.

When it comes to Jewish food, I have to say matzo ball soup, too. My mom obviously makes the best one because she’s my mom. There’s something so soul satisfying about a great bowl of beautifully flavored chicken broth. We’ve been exploring with using ramen noodles for ours.