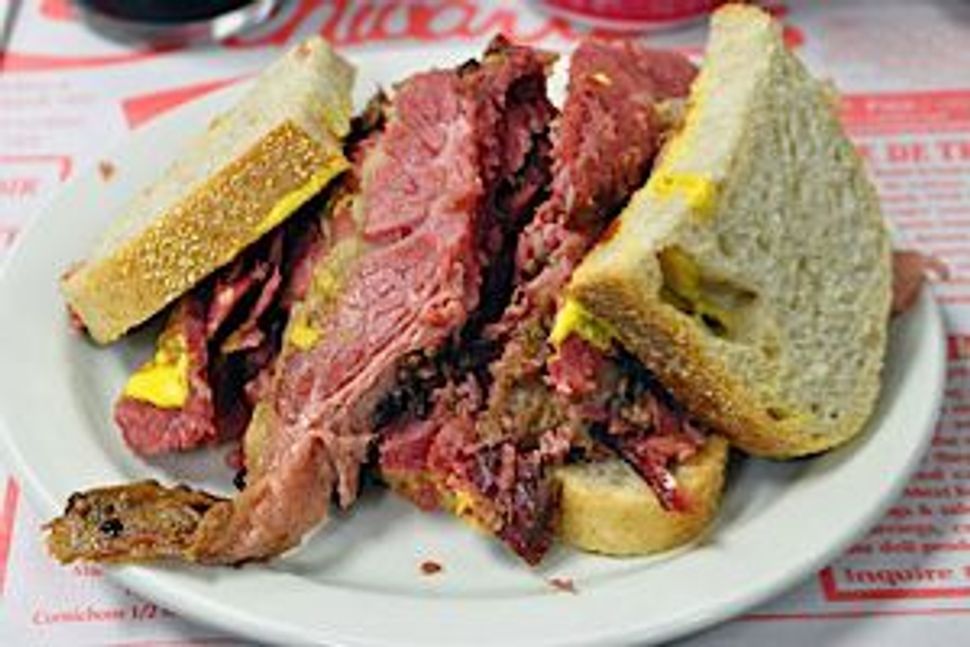 Heading north to Montreal this summer? If you’re not, you should be.

Aside from being the three months out of the year when the city doesn’t look like a snow globe, summertime is festival time in Montreal. From June until mid-September, the newly laid-out Place des Festivals is aglow with lights, sounds, crowds, music and film.

The more well-known events, like Francofolies, a two-week tribute to French culture in Canada and abroad, and the Montreal Jazz Festival, which celebrates its 34th anniversary this year and has hosted the likes of Stevie Wonder, Ella Fitzgerald, B.B. King and Aretha Franklin, have just ended, but that’s no reason to cancel.

The Just For Laughs Festival; Osheaga (basically Montreal’s Coachella); the Montreal Fashion and Design Festival; the World Film Festival and Pop Montreal, are still to come.

All that partying tends to give one hunger pangs, and Montreal is happy to help relieve them. You’ve probably heard of poutine, the heart-attack inducing combination of fries, gravy and cheese curds, but what of Montreal’s Jewish food scene? Like the city itself, its Jewish fare is defined by the blend of English-speaking Ashkenazi heritage complete with a French-speaking Sephardic twist.

From juicy smoked meat to melt-in-your-mouth North African sweets, there’s something for everyone. If you’re new to the city, check out the map below to plan your post-festival food crawl.

No Montreal night out is complete without a trip to Schwartz’s. Even at 3 a.m. (closing time for bars in the city), you will find a line snaking out the front door and onto the street, while tourists and locals alike wait to fill their bellies with smoked meat (the Canadian answer to pastrami).

Founded in 1928 by Reuben Schwartz, a Jewish immigrant from Romania, the “charcuterie hebraique” (Hebrew Delicatessen) is the oldest deli in the city, and has occupied a prime spot on Boulevard Saint-Laurent, a.k.a. “The Main,” for more than 80 years.

Each smoked meat establishment jealously guards its recipe, complete with a secret blend of herbs and spices. The good news? If you can’t get enough of the juicy blend, it’s now available in travel-friendly packaging in certain supermarkets around Canada.

Disclosure: Though the white-tiled interior and narrow tables stay true to the deli’s origins, the business is no longer under Jewish ownership. In 2012, Rene Angélil, Celine Dion’s husband and a lifelong smoked meat fan, bought the deli from businessman Hy Diamond.

Must Try: Smoked meat sandwich (when asked if you want it lean, the answer is most decidedly no).

If you’re dying for a fatty smoked meat and matzo ball soup, but can’t stand to mingle with non-connoisseurs, skip the Schwartz’s line and opt for the less crowded (but just as tasty) Snowdon Deli.

Located on Boulevard Decarie, a fair hike from the city-center, the deli may not have Schwartz’s prime real estate, but the savory dishes are well worth the trip.

One of Montreal’s rare Hasidic-run businesses catering to Jews and non-Jews alike, Cheskie’s is the place to go for achingly sweet rugelach, babka, and other diet-ruining cream-filled delights.

Must have: Chocolate babka.

New York has Delmonico’s, Chicago has Gene & Georgetti’s and Montreal has Moishes. Though a little past its glamorous prime, this 75-year-old meat-stitution is still a special treat.

Founded by Romanian Jewish immigrant Moishe Lighter in 1938, the restaurant has hosted its share of the rich and famous over the years including: Frank Sinatra, Leonard Cohen, Marlon Brando, Jim Belushi, Robert Downey Jr., hockey legend Maurice Richard, and Cardinal Karol Wojtyla, back before he became Pope John Paul II — to name a few.

Despite its Jewish origins, the menu is most decidedly un-kosher. Filet mignons and Rib eye steaks aside, one of the signature dishes is a massive shrimp cocktail. For a taste of the old country, try a side of verenikas (perogi-like potato dumplings) alongside your * treyf *shellfish.

When you’re seeking a break from all that festival reveling (and that budding hangover), head over to Bagel Etc. for a hefty brunch with a side of Montreal bagel — smaller, sweeter, and arguably better than its cousin, the New York bagel — but that’s for another story.

On weekends, be ready to wait a while. The fuchsia-painted, Art-Deco space is small and cramped, but that’s part of its charm. As a former haunt of Montreal-born singer Leonard Cohen (who still comes in from time to time), you’re soaking in Jewish entertainment history as well as that well-deserved cup of coffee.

If Fairmount bagels (the famous bakery is around the corner), eggs, and a cheese-blintz smothered in sour cream sound more like your cup of tea, head over to Avenue Mont-Royal to another brunch staple: Beauty’s.

As you enter, you’ll most likely be greeted by a smiling old man with bright blue eyes, who after asking you to wait “maybe five minutes” (a Jewish five minutes — more like 10 or 15) will exclaim, “You’re welcome!” This is Hymie Sckolnick, who founded the luncheonette in 1942 along with his wife Freda.

Any Moroccan Jew will tell you that no restaurant can reproduce la cuisine de mamie (Grandma’s cooking). But if you’re looking for some sweet pick-me-ups that are off the beaten trail, this place comes darn close to mamie’s sweets (and you won’t find it in any tour guides).

Though technically a catering service for anything from Sephardic weddings and bar mitzvahs to large Shabbat dinners, La Marguerite has a take-out option that’s worth checking out. Stop by their storefront in Montreal’s predominantly Jewish Cote-Saint-Luc neighborhood for some moufletta (Moroccan crepes served with sugar or honey), orange-flower-flavored marzipan, or *sfenj * (fluffly donuts).

Must try: Moufletta or sfenj with hefty scoops of sugar.

View Eating Jewish In Montreal in a larger map