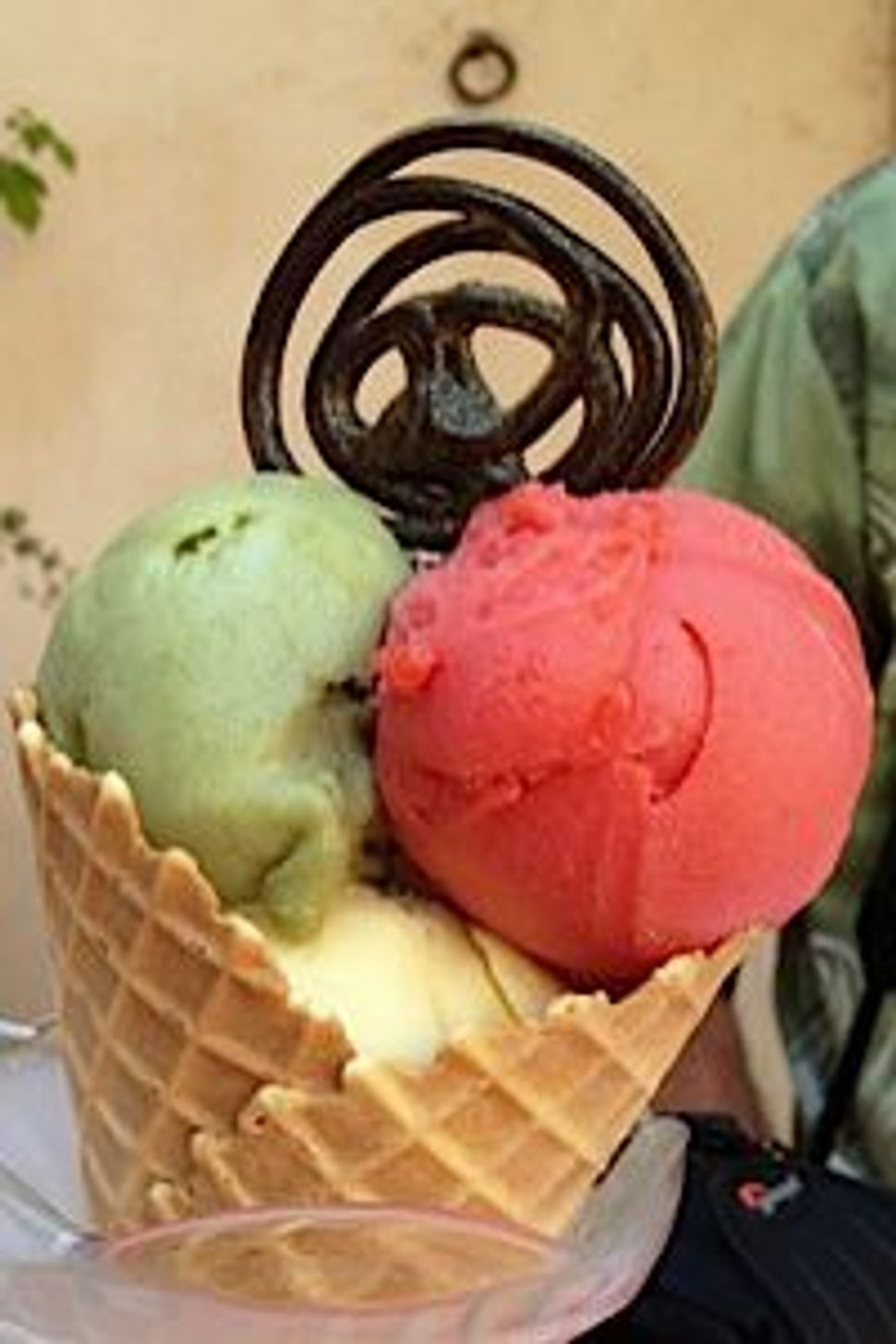 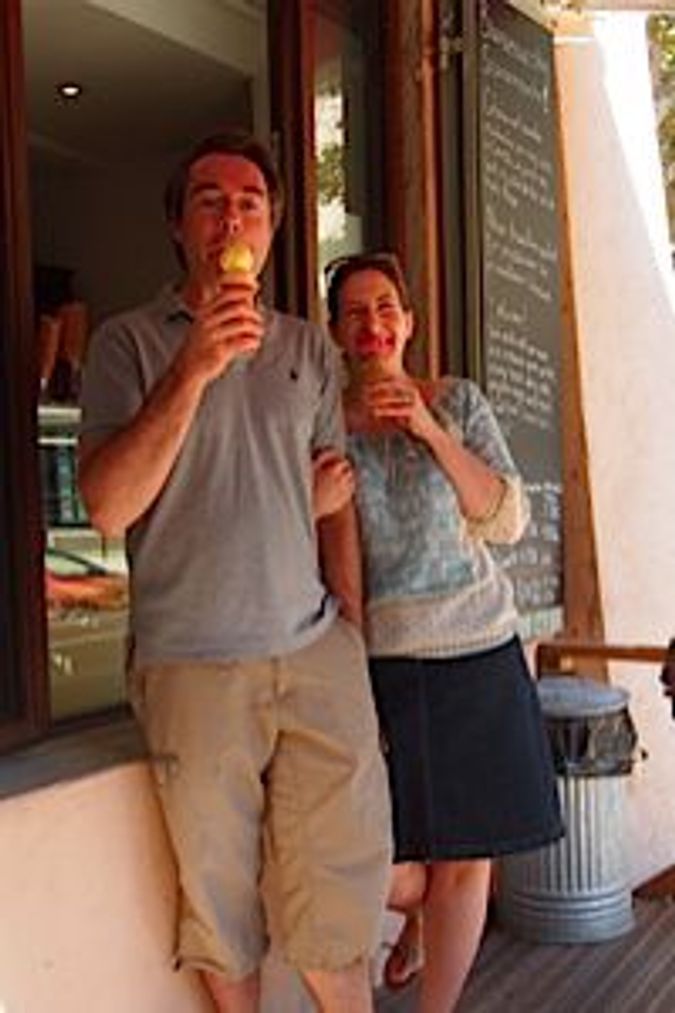 “Meals can, and often do, tell stories,” says Elizabeth Bard, a 39 year-old writer, of the huge Seders her mother once hosted at her childhood home in Teaneck, New Jersey. “When I first arrived in France almost everything I learned about the culture I learned “autour de la table,” around the table. Now settled in Céreste, a medieval village in the heart of Provence, Bard is telling a new culinary tale, selling bright pink beetroot sorbet to local children and tourists from a store front shop housed in a rough stone building.

Her French husband, Gwendal, who learned to churn frozen desserts mostly from books, named the company Scaramouche, after the swashbuckling hero of a favorite childhood film. “A difficult name that people would remember,” says this 6-footer with a PhD in computer science, who now spends 18-hour days in a nearby lab combining fresh seasonal ingredients from local farms into sweet confections. “At our 4-year old son’s school, I’m a star,” smiles the newly minted artisan glacier.

After studying to be an art historian and several years in journalism (and giving tours at the Louvre), Bard published “Lunch in Paris: A Love Story With Recipes,” a bestselling memoir with recipes, where she tells of falling in love with a Frenchman, and with French cuisine.

After nearly a decade in Paris, they decided to leave their city life style and, in Gwendal’s case, an executive position in the cinema industry. “The Franco-American combination has been a rich one for us,” says Bard “I gave him permission to dream big, and he taught me that French joie de vivre, how to live in the moment.” Gwendal nods in approval across the red metal table on a Matisse sunny morning, “Now he’s got a whole closet full of suits gathering mold.” 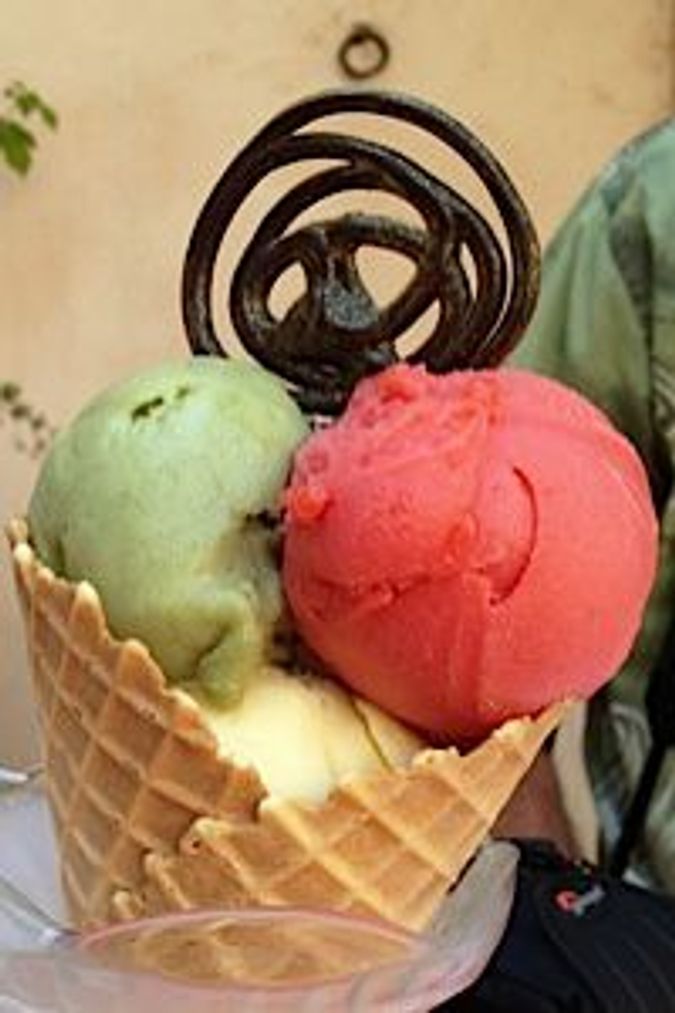 When she’s not working on her next memoir, to be published by Little Brown in 2015, Bard can be found writing (in French) on the chalkboard in front of the shop, 28 ice cream and sorbet flavors, with descriptions that highlight their origin: classics like vanilla from Madagascar and chocolate from the Dominican Republic; seasonal creations like just-ripe cantaloupe from a local farm, honey with thyme or the emblematic lavender whose flowers light up the Provençal landscape in early August.

Bard also acts as the ‘critic’ of her husband’s creations. “Earlier this year, we spent three whole months talking about nothing but vanilla,” Bard recalls with a laugh, “We are both perfectionists, which means we sometimes set ourselves impossible tasks.” Like the two days and nights the couple spent beheading 400 pounds of fresh strawberries for the opening.

“There are cultural differences,” says Bard. “Even in ice cream. We had a little fight about strawberry sorbet vs. ice cream. The French like their strawberry to be hot pink and smooth. I grew up on creamy, pale pink strawberry ice cream with chunks of fruit. Like so many other compromises in our intercultural marriage — we ended up making both.”

Banana Splits, a dessert Bard used to share with her father at the local Dairy Queen, naturally found their place on the menu. Gwendal, whose mother was born in Casablanca, pays tribute to his pied-noir roots with La Sheherazade, a sundae with scoops of pistachio, lemon and ginger and 1001 Nights, a flavor made with raz-el-hanout, a spice mix used in cous cous. This treat goes for 10 euros (about $12), while a single cone sells for 2 euros. “We are not in Lacoste, (an upscale Luberon village where the Marquis de Sade once lived),” says Bard. “It was important to us that this not be a once a month luxury for local families.” Eleven Euros is the top price for even the fancier, more spectacular desserts.

While the village of Céreste is home to fewer than 1500 people, Scaramouche attracts foodies by word of mouth from all over the Luberon, an area the size of Delaware in upper Provence, an hour’s ride east of Avignon. On August 15, a religious and national holiday in France, children outnumbered grown-ups four to one in the shop’s tiny front yard and one toddler broke into tears when Bard ran out of his favorite strawberry sorbet.

That little fellow will have to wait until next year for a new crop as Scaramouche’s owners only use seasonal fruits from local growers. “We are so spoiled for ingredients here in Provence. One of the great pleasures of this business is getting to know the local producers.”

“And it’s a smiley business,” adds Gwendal, “Ice cream is one of life’s little pleasures.”

Did Bard ever see herself running an ice cream shop? “The food of my childhood was all about sharing, about welcoming people. My mother did say ‘Does anyone send their kid to an Ivy League school to drive an ice cream truck?’ Well they do now…”