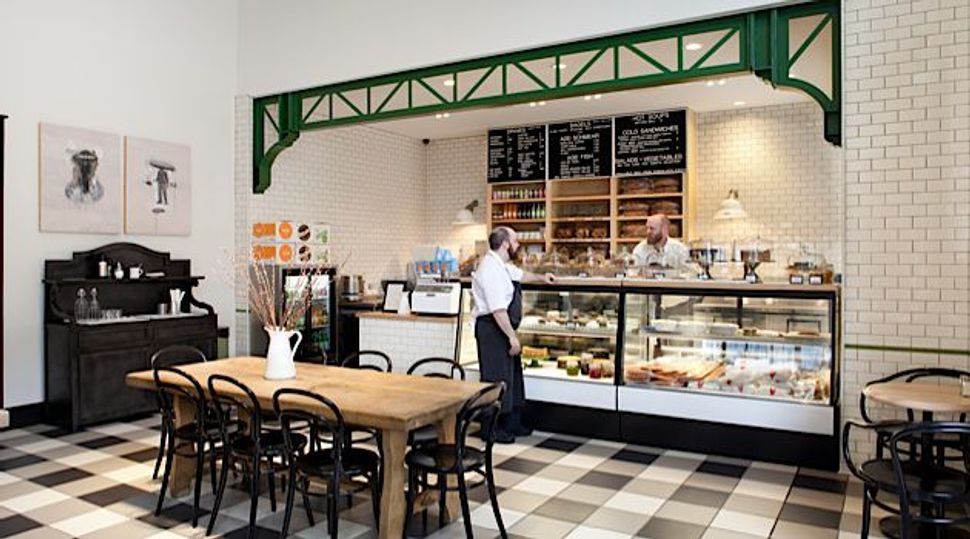 Image by Courtesy of The General Muir

By infusing a mod American eatery with Jewish soul, Todd Ginsberg has created one of Atlanta’s hottest spots: The General Muir. The restaurant, which is named for a ship that carried holocaust refugees to New York, opened in January and set bloggers abuzz with its house-cured corned beef, matzo-ball soup, latkes, and brisket with kasha varnishkes. Non-Hebraic fare like kale salad, fried avocado, and poutine have been smash hits, too.

And the eatery is about to get even busier with its coronation as the city’s best new restaurant by Atlanta magazine. While Ginsberg’s humble about the honor, he couldn’t have been too surprised; Bon Appetit included The General Muir on its own list of America’s best new restaurants, and Bocado — where Ginsberg helmed the kitchen until last year — won similar laurels from Atlanta in 2009.

An alumnus of the Culinary Institute of America in Hyde Park Ginsberg took a rare break to chat with the Forward about pastrami, proper pronunciation of Yiddish foods, and the surprising similarities between Southern and Jewish cooking.

Eater described the General Muir as a “deli-style concept.” Atlanta Cuisine called it “the best replication of a New York City deli that I’ve ever seen in Atlanta.” How do you describe it?

The General Muir is a modern American restaurant and at its core is a New York style Jewish delicatessen coupled with an appetizing counter. The modern American restaurant is what people are really relating to right now in this country. I think [New York hotspot] Ssam bar really struck a chord when David Chang started doing his own food. It wasn’t fusion as much as it was food from David Chang. When I got together with my partners this is the vision we shared — doing this with a deli-style concept. We could make a great pastrami and corned beef, but we wanted to be able to turn around and put farro with beets on the menu, with a slight Mediterranean influence. Or, make a great fried chicken served with peach and basil salad.

How receptive has Atlanta been to a menu that includes matzo ball soup, latkes, chopped liver, and pastrami?

I couldn’t have imagined a better reception. Funny, matzo ball soup and chopped liver are our two best starters at dinner and we blow through the latkes at brunch by the hundreds. So in that regard, they’re coming for the Jewish staples of good ole home cooking. The best part is I get to make this stuff for my parents who come to visit a few times a year, who used to feed this stuff to me every week growing up.

We wanted to put only the real classics on the menu, the stuff you could only get in a couple of cities in this country. We cook with heart and soul, and are inspired by the south, the seasons, and then we take some time and reflect on some of the classics, and make it ours.

What’s the relationship between Southern cooking and Jewish cuisine? Are they as diametrically opposed as they seem?

It’s funny; I was sitting down with Joan Nathan a few days ago while she was having brunch here. We were talking about a lot of the similarities between southern cooking and Jewish cuisine. The one that is most obvious is how both of these cuisines originated from subsistence. Both were poor and needed to use a lot of the same styles of preserving; pickling, brining, curing, smoking and most important, whole animal use. I don’t think that they are that opposed to one another, with the exception of the use of pig. The both do a lot of slow cooking and a lot of one pot cooking.

Your meats have attracted a lot of attention, especially the nearly two week process for corned beef. Can you share your approach/recipe for that?

The approach is actually very simple. First we buy Certified Angus Beef, and then we brine it for the proper amount of time. Some pieces take 10 days and some take 14 days. We then use a combi-oven to steam the meat. The benefit to using a combi-oven is that you don’t have to steam at 212 degrees plus. We keep it at more gentle steam, a very specific temp and for a very specific time and they are all cooked perfectly even. No matter the thickness of one piece to the next, they are all cooked perfectly. I also think steaming keeps in a lot more of the flavor versus boiling the meat.

Did you grow up with Jewish cooking?

There’s a joke about Jewish moms and what they make for dinner. The punchline is “reservations.” Don’t get me wrong, my mom would cook, and she’s a very good cook. Cabbage soup, matzo ball soup, brisket, etc… But, we still went out to eat a lot when I was growing up. I remember Katz’s and Russ and Daughters a lot as a kid. We ate a lot of deli. Two or three times a week. So maybe that was my model for Jewish cooking. How would you characterize Atlanta’s restaurant scene compared to, say, New York’s or Chicago’s? We have a good amount of diversity in Atlanta similar to that of cities like New York and Chicago. Obviously, we don’t have the sheer amount of restaurants that NYC has. The one thing that separates cities like Chicago and NYC to a city like Atlanta, is the former can and will support a much higher end form of fine dining. With only a couple of exceptions, our bastions of fine dining have gone by the wayside.

Do you have to do a lot of correcting of pronunciation of certain Jewish-y menu items?

I’d argue it’s not our place to correct the pronunciation; for one thing, who’s to say what’s right? You say tomato, I say tomato. You say Yom Kippur (Yom Ki-poor), I say Yom Kippur (Yom Kip-per). But, yes, we did have to help our staff with some pronunciations. My partner and TGM’s general manager, Shelley Sweet, put together a glossary of common words and she phonetically spelled the words for them. Now when they say it, they say it with confidence and some of them, I could swear sound like grandmothers speaking Yiddish.