Craving a Taste of the Satmar Kitchen 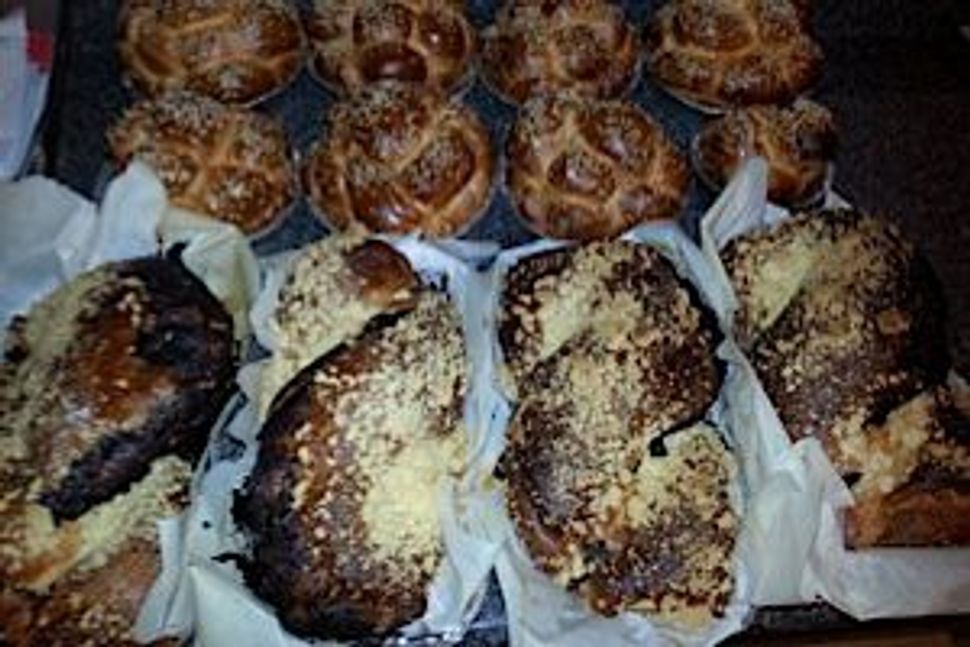 One balmy Sunday before Rosh Hashanah, I gathered my little troops — Shloimy, age 8, and Rachel, age 6 — for a day of heimishe baking. While my little ones were struggling to knead the challah dough into perfect heart shapes and ninjas, I got the kokosh cake underway. One of my favorite comfort foods, kokosh cake is an Eastern European Jewish cake, much like the more popular babke, and is made of a rich, buttery dough filled with cocoa and/or cinnamon sugar, twisted into a loaf, and topped with struesel. This is the cake my siblings and I would covertly nibble at from my mother’s hidden stash of delicacies in the basement freezer.

To this day, I still think back nostalgically — not to my childhood per se, but to my mother’s food that brought so much comfort into a home that was, at times, very tumultuous.

I was born and bred in the insular Satmar community of Kiryas Joel, which I left with my husband and two children a few years ago. Many parents in the community were second generation Holocaust survivors originating from the Hasidic enclaves of Hungary. Hungarian food, and food in general, figured prominently in our lives. Women spent much of their days cooking and baking, the aromas wafting through open windows and onto the streets. My mother’s house was no different.

My mother was raised in a Hungarian home in Williamsburg, Brooklyn — a child of Holocaust survivors. Her mother was a fantastic Hungarian cook, and her father ran a famous kosher bakery for years. Together they raised five children, four daughters and one mentally challenged son, and passed along a developed palette for fried foods and sweet pastries that are great for one’s waistline.

In between birthing and raising twelve children, my mother managed to cook and bake for her exponentially growing brood. And she did it all from scratch, down to the flakiest of flaky doughs. We never ate out, never bought a ready-cooked meal. She took great pride in her homemade food and her status as the neighborhood’s best balabusta.

I remember coming home after a full day at school to the intoxicating smell of chicken paprikash — a Hungarian dish of chicken, onions, garlic, and loads of paprika. Preparations for Shabbos started on Wednesday when she would cook the fish in the designated big oval “fish pot.” She cooked nothing else in that pot, but the few slices of white fish, a roll of homemade gefilte fish, and a few pieces of fish skin to thicken the sauce. The thick gelatin-like sauce was a coveted food, and every Shabbos meal saw a fight over the ball jar it was stored in. We called it kotchenyo, or fargliverte zaft (thickened sauce) in Yiddish, and dipped the challah in it, refilling as needed.

My mother’s meals were never lavish and she used the simplest of ingredients, yet her food evokes some of the happiest memories of my childhood.

My mother is still alive and well, and probably cooking up a storm for Sukkot and preparing the dough for the hamantaschen for Purim right about now. But I live miles away – in proximity and in spirit – and I no longer feel comfortable visiting my hometown and getting a taste of childhood.

Since my husband and I left the community we grew up in, our lives have dramatically changed. And so have our palettes. We now smugly identify as foodies, and serve our surrogate family restaurant-quality steak dishes and vanilla bean panna cotta on holidays. I traded my mother’s Hungarian food for the refined dishes of my idol in the kitchen, Gordon Ramsay. (No, he is not in my kitchen, although I wouldn’t mind to have him here.)

Occasionally, when the nostalgia for home kicks in, I cook fish with kotchenyo for our Shabbos meals, bake a batch of my mother’s challahs to go with it, and throw in a few loaves of kokosh cake to nibble at from the freezer upstairs, free of adult supervision.

This recipe makes eight large loaves (remember my mother has 12 children). It can easily be halved.

Begin by combining the yeast, sugar, and water in a mixer for kneading. Allow the yeast to dissolve (approximately 3 minutes). Mix in the rest of the ingredients in the order they’re listed. Knead on medium speed for 10 minutes.

Empty the mixer into a big bowl. Cover and let it rise for one hour. Divide the dough into eight equal parts, then divide each eighth into six equal parts. Roll each part and braid following this illustration.

Prepare egg wash from one egg and one egg yolk.

Cover the challahs and let them rise for another 35-45 minutes. Wash them with the eggs, and sprinkle sesame seeds on top.

Bake for one hour.

Craving a Taste of the Satmar Kitchen