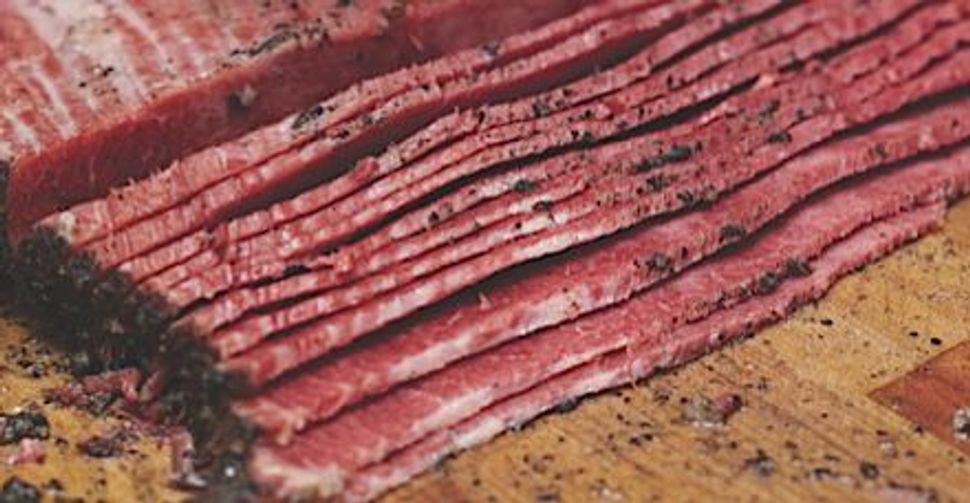 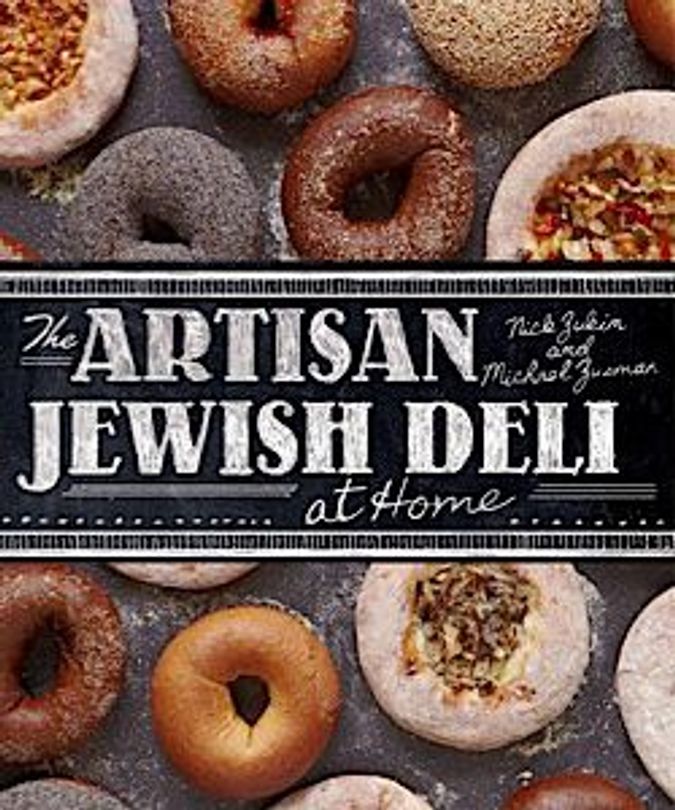 “Would You Make This?” is a sporadic new column where personal chef Alix Wall evaluates a new cookbook by making some of its recipes, sharing them with friends and asking what they think of the results.

The truth about deli food like pastrami, most of us tend not to eat it very often (and for that, our cardiologists thank us). When we do want a pastrami sandwich, it’s much easier to go out for one, rather than brine your own meat for five days, power up a smoker and wait for hours until you have a perfect piece of meat. Same goes for rolling and boiling bagels and baking rye bread or chocolate babka. But it’s nice to know that if we want to, the recipes for all these classics are in the new book “The Artisan Jewish Deli at Home” by Nick Zukin and Michael C. Zusman.

Zukin is the “Zuke” behind Kenny & Zuke’s, a popular artisan Jewish deli in Portland, Oregon (though he’s since left) and Zusman, is a state court judge by day, food writer by night, and serious amateur baker in his spare time.

Before deli fans start screaming “What do Portlanders know from deli?” this book is not about the Jewish deli of yore. It’s about the new breed of delis that are popping up in places like Portland, Seattle, Brooklyn and San Francisco. The introduction talks about how these new delis, like Kenny and Zuke’s, Shopsky’s, Mile End and Wise Sons are making everything by hand, not serving meat portions the size of one’s head — and gasp — even serving more vegetables. Recipes from all of these places are included in the book, though not surprisingly, the majority are from Kenny and Zuke’s.

As someone who grew up on my grandmother’s kreplach and stuffed cabbage but never tried making them on my own, I was glad to see such classics included. But I was equally glad to see that a wild mushroom kreplach filling was given in addition to the meat.

When I cracked open the new book to the recipe for homemade pastrami. I knew I was going to be a bit out of my comfort zone. The recipe called for an ingredient I was completely unfamiliar with and a piece of equipment I don’t own (as a professional chef, that’s a fairly rare occurrence in my life).

The mysterious ingredient: pink salt, but not the kind that comes from the Himalayas, which is what I thought, until I read the note about it in the “Sources and Resources” section. No, this kind is also known as curing salt or Prague powder #1. Its color is like Pepto Bismol. A mixture of table salt and sodium nitrite, it prevents harmful bacteria from growing and colors cured meats. I felt pretty bad-ass using it, though conflicting advice abounds in regards to how much is needed, and I ended up going with less than what the recipe suggested, since too much of it can be toxic.

The borrowed equipment: a 2-gallon or larger food-safe container that will fit in your fridge. As a pescatarian for 20 years, who began eating meat again about five years ago, making my own pastrami had never occurred to me, but I was excited to try.

The book talks about how the deckle is the best part of the brisket, and you should ask your butcher for it. I wondered if the guys at Marin Sun Farms — where I buy my grass-fed, humanely raised meat — in Oakland would know what the deckle was. While the guy who was helping me said he had heard of it but was unsure, another butcher overheard and stepped in.

“I have one in back,” he told me, disappearing to fetch it. The butcher told me that the only people who ask for the deckle are East Coast Jews. “It’s the best part of the brisket, but they are the only ones who know about it,” he said, with a laugh.

While a smoker is most-often used for pastrami, with this recipe, you can make it in your home oven. After brining it for five days, you cook it for three to four hours, after leaving it out with a spice rub for two hours. Yes, it’s a lot of effort, but most of it is just time. There is not a lot of actual work involved.

Was the time worth while? A resounding yes. While we had two friends coming for Shabbat dinner, my husband and I couldn’t wait that long. We had to taste a few pieces before our guests arrived, and the first words out of Paulie’s mouth were “That’s so f*&^ing good!”

Once our friends arrived, we started with Reuben style sliders (really they were just sandwiches cut in quarters), using the book’s recipe for Russian dressing as well (below). The only difference was we used less cheese, than the book’s Reuben recipe, wanting the pastrami to be the star.

Paulie said the pastrami was “past amazing,” even better than most pastrami he has tried. He thought it tasted more like corned beef. Our friend Adam said the seasoning was great, and he loved that the outside had an almost seared-like quality while the inside was tender. He loved this version of Russian dressing with its added kick of Sriracha.

Our friend Sam was the least likely of us to eat something like this on her own, but even she called it “delicious,” raving about the different textures of the sauerkraut and the meat, though she joked that it was “fat on a plate.”

We served Reubens to two additional friends the following night, and one of them reported drooling after the first bite that escaped his mouth and landed on his hand. While not all home chefs would take the time to do this, everyone, including me, agreed that it was absolutely delicious and so worth my time. 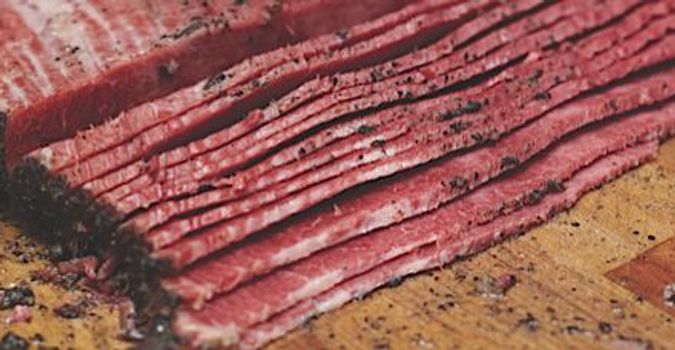 Delicatessen aficionados might cringe at the idea of making pastrami in the oven, since wood smoking is supposed to be the customary cooking method. At least that’s what they think. In truth, some of the most lauded pastrami and smoked meat involve no wood smoke at all. In his must-read chronicle, Save the Deli, David Sax reveals that the smoky flavor in commercially produced pastrami comes from fat dripping down and sizzling on the gas element of the large ovens that are used.

This recipe begins with the same cured (“corned”) beef brisket as in our Backyard Barbecue Pastrami (page 144). But here, the brisket is steam-roasted until tender, avoiding the more complex process required to make the barbecued version. Smoked paprika adds its elemental flavor without getting in the way of the traditional coriander and black pepper seasonings. The process to create this deli classic is time-consuming: 5 days to brine plus 3 to 4 hours to cook. But trust us, your patience will be rewarded.

To make the brine, fill a medium to large stockpot with 3 quarts water. Add the kosher and pink salts, granulated and brown sugars, honey, pickling spice, coriander and mustard seeds, and garlic. Bring to a boil over high heat, stirring often to fully dissolve the salt and sugar in the water. Immediately remove the pot from the heat once the brine boils.

Trim the fat from the brisket until the fat layer is about ¼ inch thick. Submerge the brisket in the cooled brine, cutting it into two pieces, if needed, to submerge it.

Allow the brisket to brine for 5 days, flipping it daily top to bottom and stirring the brine. Make sure that if any of the brisket sides are touching one another you regularly turn them away from each other to expose all of the sides to the brine.

To cook the brisket, pour 4 cups water into the bottom of a 12 by 15-inch roasting pan. Set a rack inside the pan and place the brisket on the rack, fatty side down.

Preheat the oven to 300°F with a rack low enough to fi t the pan holding the brisket. Tightly cover the brisket and pan with a double layer of aluminum foil. Bake until the meat reaches an internal temperature of 200°F, about 1 hour per pound, or 3 to 4 hours total.

Without trimming the fat, carve the pastrami into ¼-inch-thick slices, or cut as thin as possible without the meat falling apart. Keep tightly wrapped in aluminum foil or plastic wrap in the fridge for up to 1 week or frozen for up to 6 months.

From “The Artisan Jewish Deli at Home” by Nick Zukin and Michael Zusman/Andrews McMeel Publishing, LLC

Our not-so-secret Russian dressing recipe gets its zip from Worcestershire and hot sauces and our own Spicy Pickle Relish. If desired, substitute a sweetish store-bought relish to save some time. Mexican- or Louisiana-style hot sauces are fine to use, but for our money, the Asian-style sriracha is the best in class. This dressing can be used for salad, including our Deli Chopped Salad (page 91), but it is also a vital component in our Pastrami Reuben Sandwiches (page 149) and in Kenny & Zuke’s popular Pastrami Burgers (page 151).

In a small bowl, combine the mayonnaise, ketchup, relish, Worcestershire sauce, hot sauce, and salt. Stir together until thoroughly combined. Transfer to a covered container and refrigerate for up to 1 week.

From The Artisan Jewish Deli at Home by Nick Zukin and Michael Zusman/Andrews McMeel Publishing, LLC