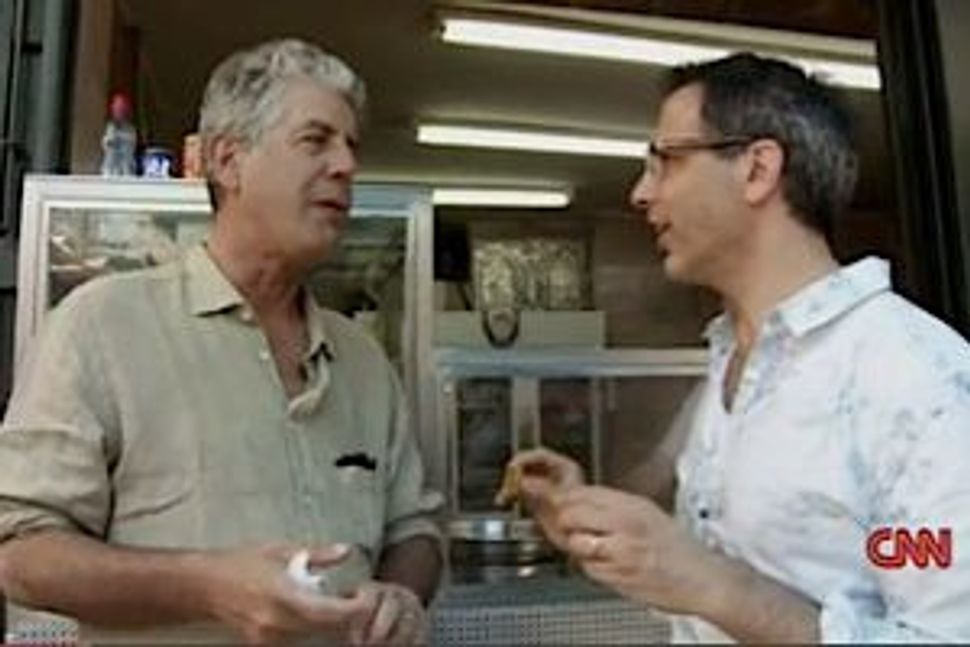 It took a decade and at least one petition circulated by fans, but celebrity chef Anthony Bourdain finally shot a show in Israel. “Jerusalem,” the first episode of “Parts Unknown, Season 2,” aired on CNN , giving viewers a chance to judge whether it was worth the wait.

First on “No Reservations” and now with “Parts Unknown,” Bourdain travels the world, looking to meet people and experience their food. In this episode Bourdain travels through Jerusalem, a few small Israeli towns, Jewish settlements and Palestinian parts of the West Bank as well as the Gaza Strip. He eats falafel just inside the Damascus Gate, in the Old City of Jerusalem, with the British-based Israeli chef Yotam Ottolenghi. He dines briefly at a home in the Jewish settlement of Ma’aleh Levona in the West Bank, hitches a ride with female Palestinian race car drivers, breezes through a cooking class in the Aida refugee camp, has a vegetarian meal at Jewish-Muslim couple Michal Baranes and Yakub Barhum’s restaurant Majda and spends time with “Gaza Kitchen” cookbook author Leila El-Haddad in Gaza.

Bourdain discusses his own Jewish identity (or lack thereof), asks his hosts direct questions about anti-Arab graffiti and street art glorifying terrorists and expresses hope for coexistence. He ends the episode in conversation with a restaurant owner in an Israeli town bordering the Gaza Strip who lost a daughter in a Hamas rocket attack.

“By the end of this hour I’ll be seen by many as a terrorist sympathizer, a Zionist tool, a self-hating Jew, an apologist for American imperialism, an Orientalist, a socialist, a fascist, a CIA agent and worse,” Bourdain says as the episode begins.

Read more and get Liz Steinberg’s recommendations at Haaretz.com.