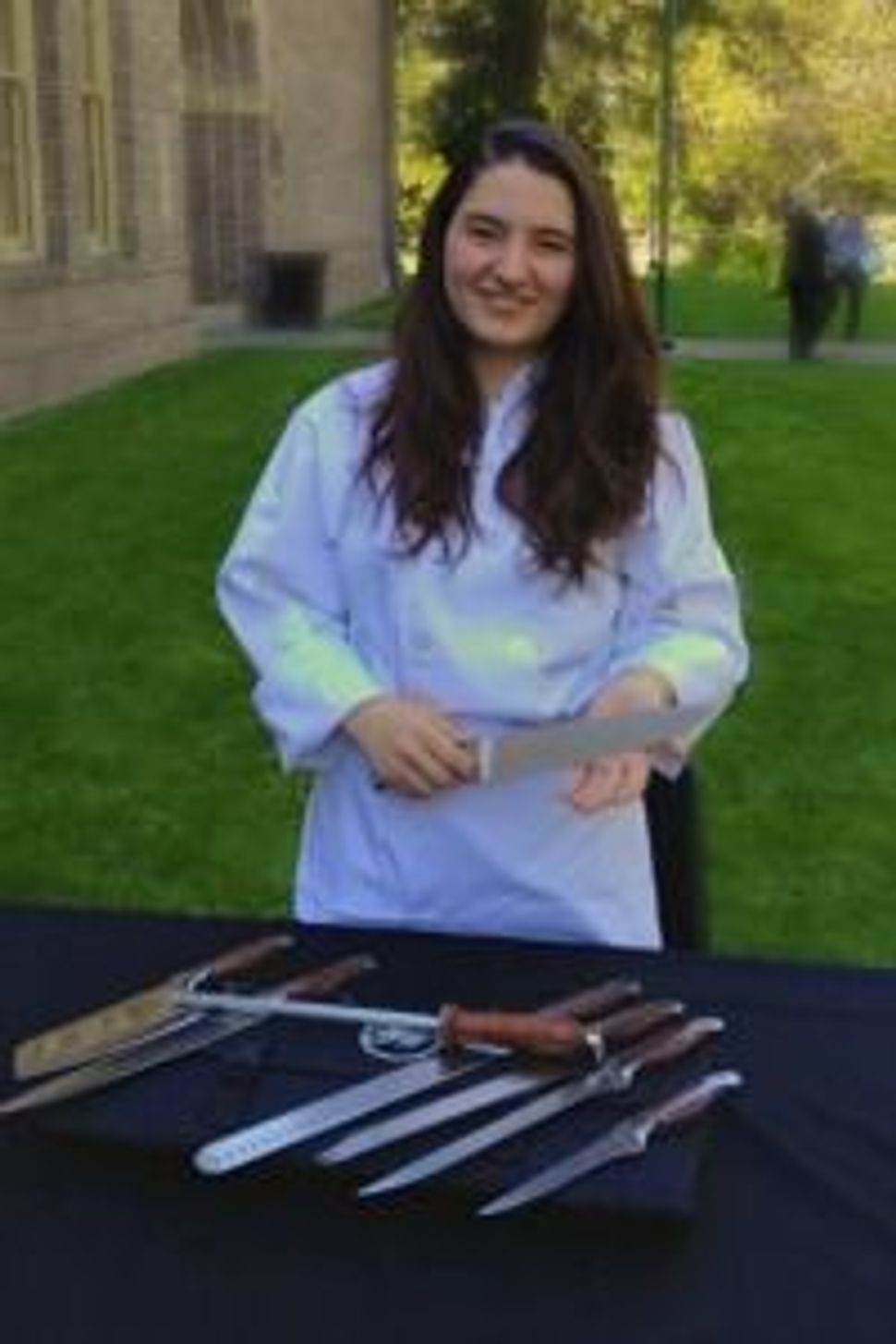 The government shutdown already has veterans and federal workers up in arms. Now, you can add an 18-year-old Jewish chef to the list.

Until last week, Sarah Rosenthal was spending long hours in the kitchen. The Seattle resident was scheduled to fly to Washington D.C. last Friday, and compete on Saturday for the title of America’s Top Teen Chef. Now, she’ll have a few more months to perfect her recipe. Rosenthal learned Wednesday that the contest is postponed until January because of the government shutdown.

“People are literally stopping traffic and protesting and striking,” she said she was told.

Rosenthal, 18, who graduated from West Seattle High School in June, is taking a break before she enters the University of Montana in late January. While she made this decision to give herself a well-deserved rest after a long slog of earning straight A’s in numerous advanced placement classes throughout high school, she felt she could also use the time to prepare for the competition. Of course she didn’t know it would be this much time.

If she wins the National Restaurant Association Educational Foundation (NRAEF)-sponsored contest in January, she will win the chance to cook a meal in the White House kitchen for President Obama and a public appearance with Maneet Chauhan. The Indian-born chef is a frequent judge on the Food Network’s “Chopped,” and the author of “Flavors of My World” with Doug Singer.

Rosenthal’s journey to this point began, of course, by helping her grandmothers in the kitchen. A Hungarian dish, nukele paprikash (chicken with spaetzle, or dumplings), was a favorite.

Rosenthal grew up attending Seattle’s progressive Jewish community, Kol HaNeshamah, and despite her current ambivalence about Judaism, she still sings in its choir. Her favorite Jewish food is a chocolate chip danish from the Katella Deli in Orange County, Ca.

She didn’t take cooking seriously until she enrolled in a two-year culinary elective in high school. Known as ProStart, students participate in an accredited program that prepares them for a career in the culinary field.

For the competition, ProStart alerted its instructors at 22 schools across the nation that it was holding a contest for America’s Top Teen Chef, and at each school, three students were selected to compete by their instructor and peers. At West Seattle High School, Rosenthal was chosen to go up against two boys. One of them, she noted, is a football player who became a close friend, something that never would have happened outside the kitchen. Because of ProStart, he is seeking a career in the culinary industry.

Before the competition, Rosenthal queried some Seattle chefs who served as mentors to the high school students. “I spent a lot of hours trying to figure out what would be different than what everyone else would do, and bounced ideas off people,” she said.

They had 40 minutes to create and cook a dish representing “Contemporary American Cuisine.” Rosenthal’s winning dish consisted of Matcha pasta — a Japanese fine-powdered green tea, which she added to flavor her pasta dough – topped with kiwi and basil pesto. Garnishes included Serrano ham (a dry-cured ham from Spain), paprika-toasted pine nuts, roasted garlic and fiddlehead ferns, roasted green onion, and a fried quail egg on top. (Rosenthal made sure this reporter knew what Matcha was, since other press outlets reported her making “macho pasta.”)

While not everyone she spoke to thought kiwi pesto sounded like a good idea, she decided to take the risk, admitting that she had never made the full dish she created in the competition. Chauhan, who combined the ProStart competition with a tour to promote her new book, served as a judge, and declared Rosenthal the winner. Her prize: a set of Gunther Wilhelm knives (Chauhan’s preferred brand) which is a co-sponsor of the contest.

That all happened in May, and about two weeks later, Rosenthal’s instructor was notified that she was one of three finalists chosen to compete in Washington in October. Rosenthal wasn’t surprised by the news, since the camera crew told her most students were interpreting the theme of contemporary American cuisine by making their own spins on steak or grilled cheese.

Rosenthal knows nothing about her two competitors (disclosure: she only came to this reporter’s attention because she’s the niece of a friend). She’s been told she will have 60 minutes to create an appetizer, entrée or dessert. Unlike on the Food Network’s “Chopped,” in which contestants open a mystery box to learn what random foods — things like gummy bears and chicken feet have been featured — they’ll work with on the spot, she already knows her ingredients, and luckily, they’re not strange at all: chicken, spaghetti squash, persimmons and Brussels sprouts.

Since learning of the ingredients, she’s been in the kitchen non-stop, perfecting what she hopes will be her winning recipe, but now with the postponement, she’ll have several more months than she had anticipated.

She wouldn’t give away what she had in mind in case her competitors might come across this, but did divulge it will be something totally unexpected.

“I’m ballsy, so I’m going for it,” she said. “If you do something different and you do it well, you’re guaranteed to win. If you do something avant-garde and you lose, then you can say you were ahead of your time and they just didn’t get it.”

Rosenthal said the postponement was a disappointment, but also maybe a blessing in disguise.

“I was really jazzed to cook for Maneet and prove myself in the culinary world but all is not lost,” she texted. “Now I have two months to polish my dish and make sure I really kick ass when I go.”

Though Rosenthal has already proven her culinary chops, she isn’t headed to a career as a chef.

“Cooking is a hobby and skill I will always have with me, I will teach it to my children and grandchildren, but will not pursue it as a career,” she explained.

Instead, she received a scholarship to study journalism at the University of Montana, having co-produced an award-winning radio story about a woman who became homeless to pay for her daughter’s college tuition during an internship at Seattle’s public radio station, KUOW.

Because of that story, the woman received an offer for permanent housing, and Rosenthal won a regional Edward R. Murrow award from the Radio Television Digital News Association.

As for Rosenthal’s career goals? When Anthony Bourdain is ready for retirement, his more literary replacement is waiting in the wings.

“I hope to be a traveling food journalist,” she said. “I want to be paid to travel around the world, eat food and write about it. That’s my dream.”

Alix Wall is a freelance writer and personal chef in Oakland.