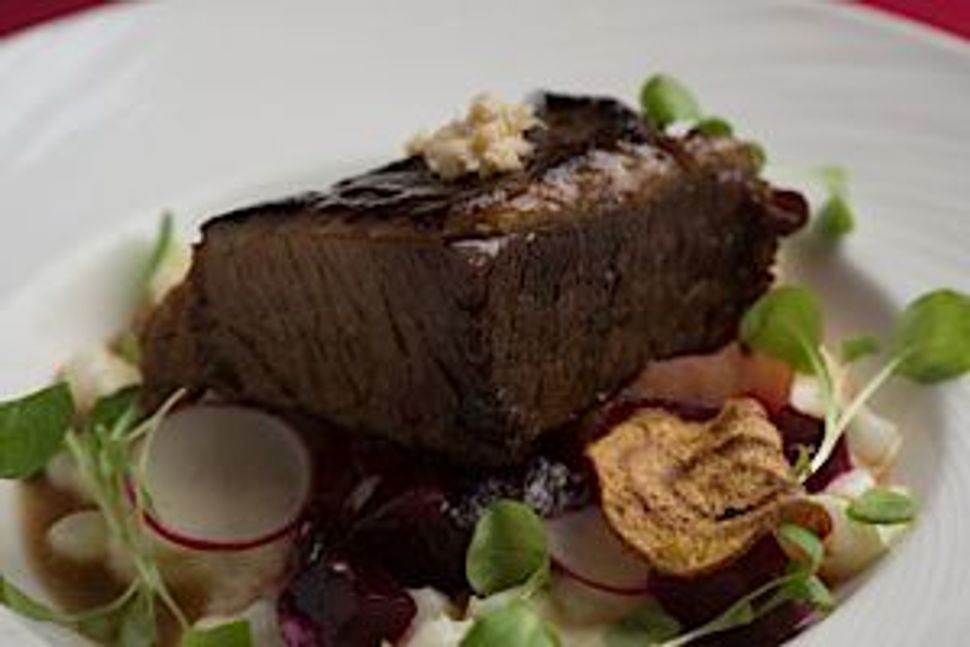 Image by courtesy of el nosh 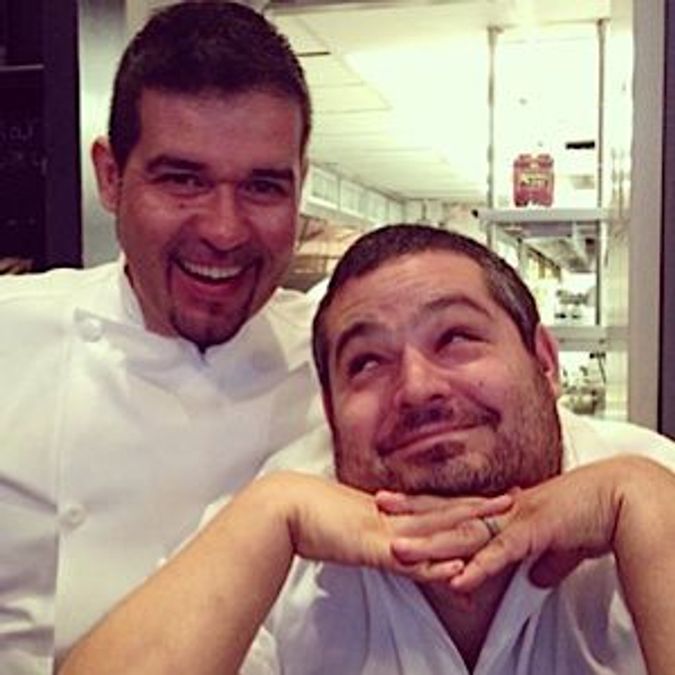 Chefs Roberto Trevino and Eric Greenspan goofing around in the kitchen. Image by courtesy of el nosh

Successful fusion foods typically require unique, inventive and delicious concoctions to come together from different culinary kitchens and actually work for our taste buds. Who would have thought “Latinizing” latkes and cream cheese and lox or “Jewifying” croquetas and chorros could create such successful combinations?

Chef Eric Greenspan of the highly acclaimed L.A. based restaurant, The Foundry on Melrose teamed up with close friend Chef Roberto Trevino, a fellow restaurateur and TV personality from Puerto Rico to create El Ñosh, a Latin-Jewish pop-up concept. The two have managed to design delectable dishes that truly highlight the essence of both of their rich cultures and family backgrounds. We spoke with Chef Eric Greenspan after El Ñosh’s latest pop up event last weekend in New York City to learn more about the concept hitting the road.

So what exactly is El Ñosh?

Where should I start? El Ñosh started out as a fun thing to do. Roberto and I were just joking about how to get ourselves into the Miami food and wine festival and then we realized that we should probably just combine our two cultures, Latin and Jewish, to create a Latin fusion. We then went off and did it for fun, we were just trying to do something different. Since then we have done a couple of pop up events and we are going to be launching our first food in truck in L.A. in about a month.

How did you come up with the name?

The whole process of collaboration was a lot smoother than it should have been. Even choosing the name was a no-brainer. The traditional Yiddish word for snack is Nosh and then Roberto said we should call it El Ñosh, emphasis on the Latin “y”, which is the perfect Jewish- Latin combo. The menu was also almost predestined.

Who are the people behind it? How did you meet?

I’m the Jewish side of the business and partner Roberto Treviño, who specializes in Puerto Rican food and owns four restaurants there are behind El Ñosh. We met on the set of the second season of the Next Iron Chef. They put us next to each other for one episode because I got thrown off the show after that. We had a powerful friendship and have remained very close ever since. It’s especially nice that we have been able to work together without all of the fireworks that usually exist when dealing with two high profile chefs. 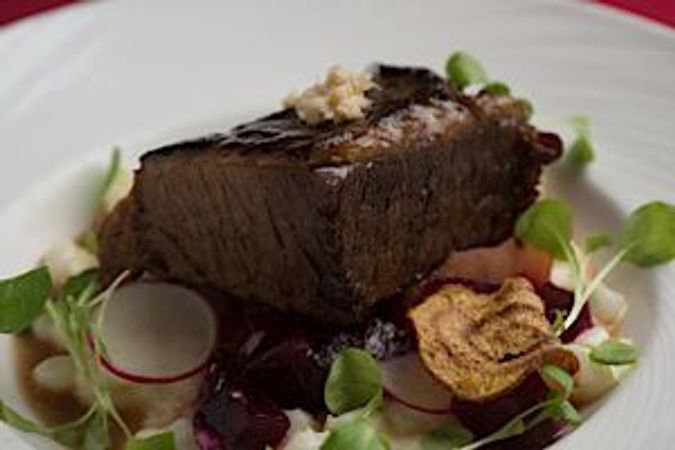 Image by courtesy of el nosh

Where did you learn about Jewish cuisine and where did Roberto learn to cook Latin food?

Roberto is of Mexican origin and has four successful restaurants in Puerto Rico. Both of us learned these cuisines from our families. Continuing our family traditions is the basis for both of us to try and understand this cuisine. We both come from such a rich tradition, and kind of a cultural cuisine and both of us bring that rusticity to make one wacky combination.

What inspired you to bring these 2 different worlds together?

Just two great friends bringing two rich culinary traditions together. When we both got together – it was just a natural thing, we wanted to do something more entertaining and challenging and best way to do that was to build up from each other’s personal backgrounds.

What is the most popular dish?

How did you decide on a menu?

We got on the phone and emailed back and forth. Roberto sent me five Latin dishes and I Jewified them and I sent him five Jewish dishes and he Latinized them. Jewifying and Latinizing is how we created the menu. The fact these combinations actually worked is a whole other story.

What are the plans for the future?

Our next stop is opening up a food truck in LA and then perhaps San Francisco. We are discussing some brick and mortar projects in New York City because that is just the perfect place for this kind of concept. Over this past weekend we sold out every night and there is always a buzz and a lot of excitement over it there. We both love the city too.