Stealing Candy From Your Own Baby on Halloween 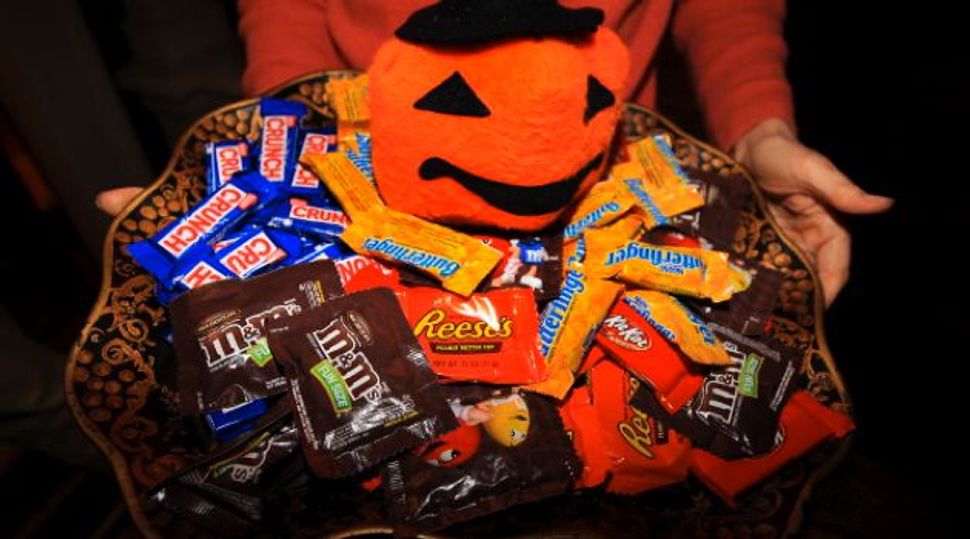 Coming soon, to a child you love: candy!

Lots of it, in heaping bagfuls, and with it the belief that somehow you can and must make a sensible, sensitive, child-centered, adult-led, informed, rational, gentle, crafty, flexible, caring and healthful plan regarding the booty’s lifelong impact on your child’s health, teeth, eating habits, food obsessions and body image.

That’s not too much to ask, right?

While Jews get off easy when it comes to Santa issues — or at least they used to, when they could just say, “Forget it, bubele, he doesn’t exist!” — Halloween is an equal opportunity holiday, bringing the candy conundrum to Jew and gentile alike. From what I can tell, both groups are busy trying to make the perfect game plan. But it’s possible that the Jews (being Jews) feel a tinge more guilt about whatever plan they’ve chosen.

“His very first Halloween, maybe he was 3 or 4, I made the hugest mistake I’ve ever made in my entire parenting career,” said Amanda Hass, a New York City publicist and mother of Jake, now 13. “I had him all dressed up in a train costume that I made myself. And the very first time that we knocked on a door, he was like, ‘Oh my God — they gave me candy!’ and I said, ‘No, no, don’t eat it. You save the candy and you bring it home and I get to look it over and we’ll figure it out later and….’ I don’t know what I was thinking! He was traumatized for life.”

As Jews have enjoyed a long relationship with psychology (and moms), I asked Hass to please put Jake on the phone: “Jake, what happened the first time you went trick-or-treating with your mom?”

“I think I was crying for a while and she sort of backed down.”

“Were you traumatized for life?”

And there you have it. As parents, we try to make things work, and oftentimes they don’t. Not such a big deal. But when staring down candy with a capital “C” that rhymes with P that stands for “periodontal issues” and “pulchritude,” it’s hard for parents to realize that.

“I thought I was doing everything right in terms of teaching my son what is an appropriate amount of candy,” said Debbie Koenig, author of “Parents Need To Eat Too.” But when she watched her son trick-or-treating for the first time, when he was 5, she saw him gobbling down 90% of everything he got. On a dime, she decided to invoke the “Switch Witch.”

The Switch Witch is a relatively new childhood character whose job description is strikingly similar to that of the Tooth Fairy. Except instead of taking away teeth and replacing them with money, she takes away candy and replaces it with a toy.

“It worked like magic!” Koenig said, “because the kid loves toys more than he loves candy.” Moreover, “Whenever it seemed he was getting ready to go nuts [and eat more], we quietly reminded him that the witch wouldn’t be able to give him what he wanted if he wasn’t able to give her a substantial amount.”

So the kid learned not only to moderate his candy diet, but also the basics of business, as well as how to use the word “substantial” in a sentence. Win-win-win.

Jessica Gottlieb, who blogs at jessicagottlieb.com, employed an idea similar to the Switch Witch, but with a Mexican flair. Since her daughter’s birthday is November 3, she put all the candy into the party piñata. In other words, Gottlieb said, “I had a good exit strategy.”

So did Tracy Bagatelle-Black. The Los Angeles mom of two hid her kids’ candy in the garage, where they never found it. But… the baby sitter did. “We thought she was getting fatter,” Bagatelle-Black said. She was.

And then there are the holiday recommendations of Steven Roth, a New York City dentist. “What we talk about doing with parents is getting them to play a little game with their kids and pour all the candy out of the bag and pick out the ones that are the most likely to cause cavities,” Roth said.

And then? “You figure out a way to get rid of them.”

But in truth, Roth has given Halloween a lot of thought, and he even developed four categories for his candy game: “There are Gummy Gremlins — the taffies or caramels that stick to the nooks and crannies of the teeth; Spooky Sugars and Sours, which metabolize into straight-up acid and destroy the teeth enamel; Mom-Approved Milk Chocolate” — plain chocolate sticks to the teeth less than the other options do, he explained — “and Yum! Yum! Sugar-Free Gum.”

Readers, I had to ask. “Has anyone ever actually played this game?”

No, has anyone else ever played it?

“We recommend it to patients.”

That’s not the question.

“Well, in actuality, no. Other than us.”

That’s sort of a relief. Because no matter how hard it is to figure out your personal Halloween strategy, it has got to be easier than dividing up the booty with the kids right there, taking away half of it and convincing the kids that this is a game.

Lenore Skenazy is founder of the book “Free-Range Kids” and the blog of the same name. Her show, “World’s Worst Mom,” airs on Discovery/TLC International.

Stealing Candy From Your Own Baby on Halloween