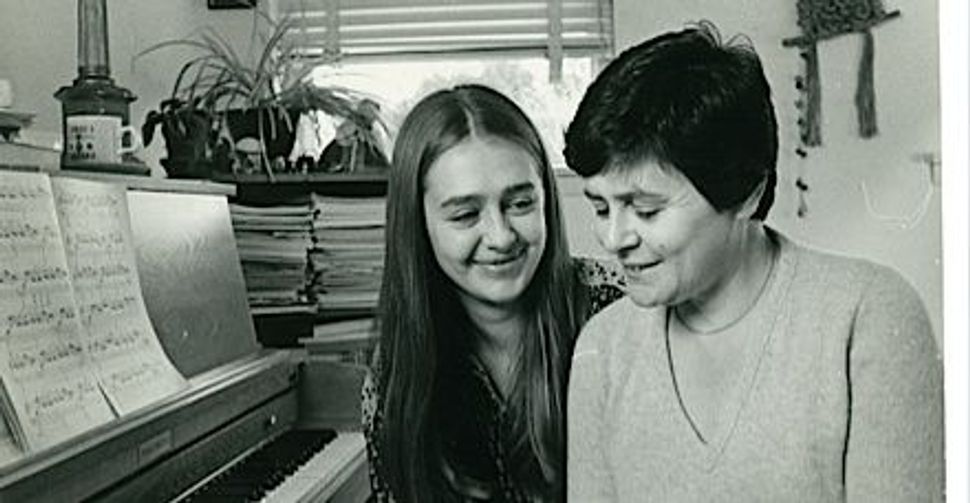 Imagine a book that’s part scrawled kitchen index card, part political introduction to socialism and part family saga, all doused with a healthy dose of mayonnaise — what you get is Anya Von Bremzen’s “Mastering the Art of Soviet Cooking.”

In her self-described “memoir of food and longing,” the James Beard-winning food writer describes her childhood in Brezhnev-era Soviet Russia: living in a communal apartment where 18 families shared one kitchen, dreaming of opulent national dishes only found within the pages of Chekhov and learning to cook from her anti-Soviet mother, Larissa, before immigrating to the United States in 1974.

The Forward’s Anne Cohen recently spoke by telephone with Von Bremzen to talk about what she learned about her own family, her favorite Jewish dish, and her first jarring encounter with Velveeta cheese.

What made you decide to write the book?

[This particular past] was very powerful and deep. It wasn’t just mine but kind of the collective past of the entire country. Something flashed back at me [from] the food queues, and the deprivation and this very existential attitude that my country had towards food. At some point, I just felt the need to start jotting things down. It came out so easily; it was there bottled inside me.

Each chapter represents a decade (and a dish) under the Soviet Union. What was your favorite period to write about?

In a way, this book is about childhood in at totalitarian regime. It was so powerful to tell it from the perspective of a child and not over rehearsed Cold War history.

…The ‘30s, my mother’s childhood, was amazing; that whole era, the combination of terror and idealism and the Stalinist happiness project, while in the meantime people get arrested at night. Soviet food as we know it is also born in that decade.

The other period I enjoyed writing about is the ‘70s — my own childhood. The whole state project becomes a farce. I experienced power and regime in a totally different way from my mother: I kind of enjoyed it.

The book is also very much about your family’s history. Did you discover anything new about your own past?

How important my grandfather [Naum Frumkin, an intelligence chief under Stalin] was. In the cynical ‘70s we kind of laughed at his stories about WWII. Then I started interviewing family members and reading [their accounts] against other memoirs about the war, and I was like ‘Wow.’ It just stunned me. He really was this important intelligence person and all those decrepit old men that would come to his parties — like Admira Tributs — [were some] of the most important people in WWII.

Also just some private moments: I had a conversation with my mother about how she felt when Stalin died. Despite being a dissident, she felt a deep sense of loss. She wanted to be an actress when she was young and she said: ‘I felt crushed that he would never come to see me in a play.’

The deep bond between Stalin and the people was impressive to me.

Describe your family’s Jewish background. Did you grow up Jewish?

My mother’s side of the family is Jewish. [Her] grandparents witnessed their child murdered in the 1905 pogrom in Odessa. Initially, the revolution brought Jews a sense of liberation. My grandparents could move very quickly through career ranks. There was no anti-Semitism in the ‘20s and ‘30s. At the same time, you had to give up the religious identity. Judaism was an ethno-national identity. My grandmother in the 1920s [turned] her back on her mother’s gefilte fish as religious food.

State sanctioned anti-Semitism really kicked in after the war. That’s when it became dangerous to be Jewish. My grandfather took a civilian job. He still could have been arrested. They actually came for him and it was the day of Stalin’s death.

By the time I grew up, it was a dark stamp on the passport. In the ‘70s, being Jewish was a really terrible thing. It’s kind of a hidden yellow star, having that in your passport.

Do you identify as a Jew now?

Yes, culturally. I identify as Soviet Jewish, where Jewishness was not a religious identity but a cultural, moral and spiritual one.

I was frankly shocked that it was a religious thing. In Russia, any kind of a religion had a dissident dimension. Now I feel very comfortable. Jewishness is something much deeper than gefilte fish.

What was your first encounter with Jewish food?

We went to Odessa to the house of distant relatives and I saw them making gefilte fish. They wanted me to stay and show me how it was done. It was very hot and the fish smelled, and I kind of ran away. It occurred to me later that I ran away on my Jewishness. I also remember seeing matzo in Moscow and it was hidden in a basket under a table under all these towels. I had just been to a computer exhibit that day and seen computer paper for the first time, all perforated. At first I thought it was another version of computer paper. When you’ve never seen it, it looks really strange.

Do you cook Jewish food now?

We do holidays. My mom loves to stage different period dinners so she does shtetl dinner. I also make stuffed chicken — It’s very laborious, all these female Jewish shtetl dishes. I love kugel, I’m a total kugel addict.

Do you remember your first taste of American food?

Someone took us to a diner, called Robin Hood in Philadelphia. There was a cheeseburger with Velveeta cheese and it was a primal culture shock at how something could be so yellow. Russian food is very savory, and there was fluffy coleslaw that was very sweet. What also shocked me was the banana split. I had never seen a dessert so humungous. I was just like ‘How am I supposed to eat this.?’

You recently wrote a piece for Travel + Leisure about the rise of Soviet-era nostalgia in Russia. Did that surprise you?

I’ve been back often enough that I saw it kind of gradually. I think the USSR has become a brand. I think it’s getting kind of stronger and stronger and suddenly everything bad is forgotten, and all one sees is this rosy socialist past. It’s like a version of comfort food: It’s a great plate of mayonnaise-laden salad and frankfurters.

Capitalism shows a very ugly face in Russia. It’s very in-your-face, blingy, Gucci, Prada, so one can’t really blame the people for missing their youth. The government is sort of exploiting that.

Does food play a big role in that collective memory?

Food always does. Look at American comfort food like mac and cheese. It’s most recognizable, it appeals directly to your senses; it’s easily commoditized.

What’s the greatest lesson you learned from writing this book?

I think how intimate one’s relationship with power is [in] a totalitarian state, and how deeply our private lives were connected. It was like your parent. The state gave you food, housing… That’s a subject that just kept recurring again and again. It wasn’t just overtly political, it was really intimate.

[h/t Tasting Table] for the video.]