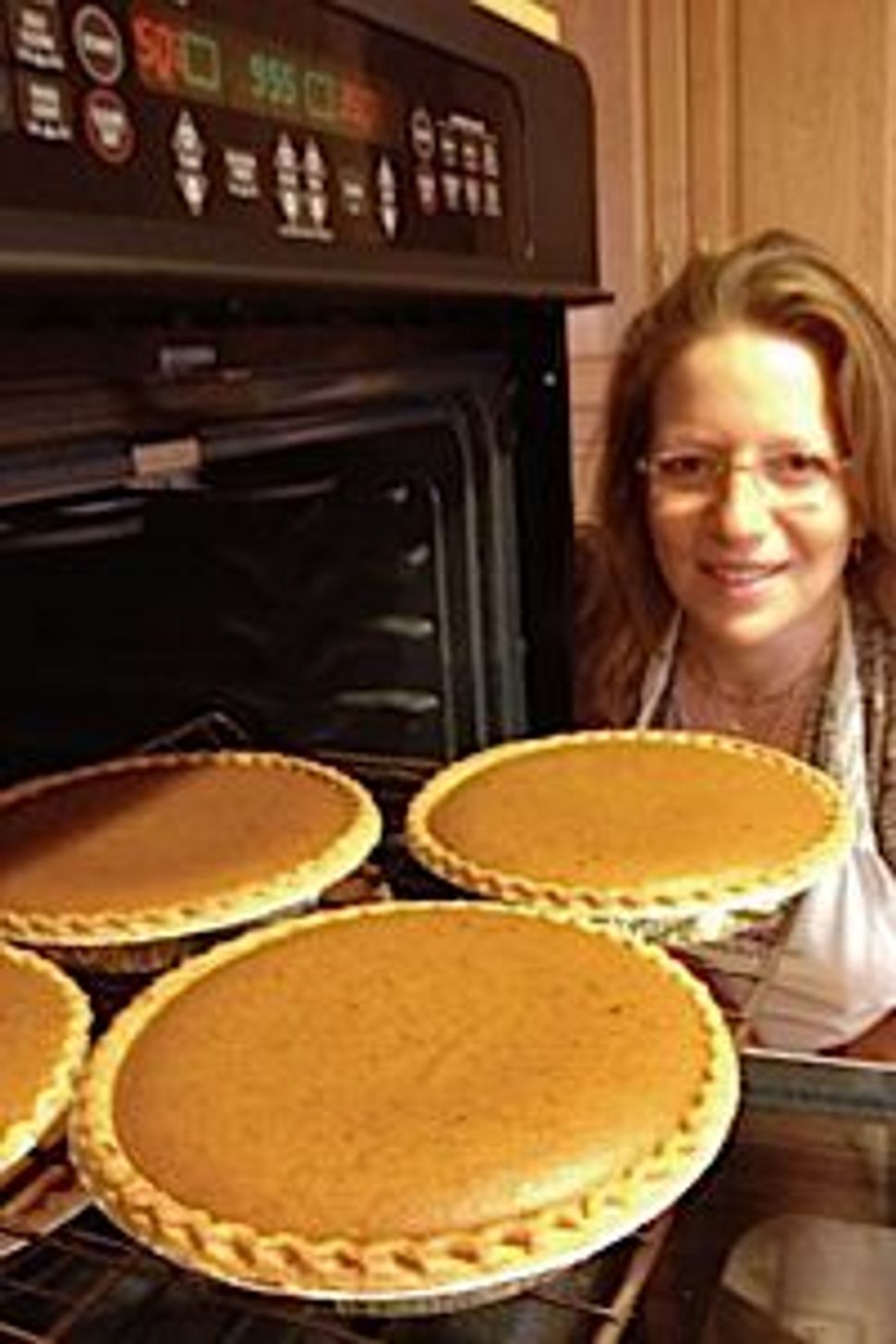 Pie Queen: Adeena Sussman poses with pumpkin pies she baked for her charity fundraiser, Pies for Prevention. Image by Courtesy of Adeena Sussman

When sisters Sharon and Adeena started baking Thanksgiving pies five years ago to raise money for ovarian cancer (which claimed the lives of their mother and grandmother) they never imagined they would raise over $100,000.

But with a cadre of committed volunteers holding bake sales in 10 cities around the country, plus Toronto and Jerusalem this year, they’ve done just that.

“It gives me chills when I say it out loud,” Adeena Sussman said.

While their father donated a Torah in his wife’s memory, and the family honored her by bringing cultural events to the community, the sisters wanted to do something more personal that embodied their mother.

Even though Stephanie Sussman worked full time, she was known for her legendary hospitality and Shabbat dinners. Adeena Sussman remembers waking up in the morning to see a freshly-baked challah, a pot of chicken soup and a kugel all resting on the stove, and thinking “When did she have time to do all of this?”

Chief rabbis and Nobel prize winners were some of those who ate at the Sussman’s. But it was not limited to them. There might also be some of her students from places abroad, who didn’t know what it was to be a Jew, and certainly not an Orthodox one.

The sisters thought baking pies in their mother and grandmother’s memories would be the perfect way to honor them.

“Pies [for Thanksgiving] are something that people love, but aren’t something people necessarily want to make themselves,” Sussman said. “So the convenience and cause dovetail really nicely.” The first year, they made $15,000.

They chose the Teaneck-based organization Sharsheret to be the recipient of the money, both because it helps Jewish women who are facing breast and ovarian cancer, and because when Sharon Wieder (nee Sussman) was diagnosed with breast cancer Sharsheret was a resource for her.

Baking pies come naturally to the sisters; who both pursued careers in food because of their mother’s influence. Sussman is a recipe developer, author and food stylist (her articles appear regularly in the Forward’s food section), and Wieder is a nutritionist. The first year, it was just the two of them in Wieder’s Teaneck kitchen, baking as many pies and loaves of pumpkin bread as they could (all kosher, though not certified).

Year by year, word spread about what they were doing, and people who either knew the sisters or had been touched by cancer either made donations to support the bakers’ raw materials, or started holding bake sales on their own.

“People just really enjoy doing it,” said Sussman. The act of baking pies to raise money for this is “unpretentious, unassuming and effective, like our mom. It’s based on food and fills a need and is really fun to do,” she said, adding that most people bake with a partner.

Cuisinart stepped in as a sponsor, and has donated large-scale mixers to the bakers. The boxes are donated as well, and each pie comes with information about Sharsheret.

Recipes are provided by the sisters as well as instructions on to how to run the sale. “Everything is as turn-key as possible,” said Sussman. So far, they have sold close to 5,000 pies.

Yifat Levin, who shares a sister-in-law of Wieder, is taking part for her third time this year, selling pies in Atlanta. She has a few volunteers helping her bake.

“It’s exciting to be working with them and helping them raise money for a charity that’s important to them. It’s very gratifying fundraising,” said Levin.

Pies will also be available for the first time in Toronto this year, thanks to Adina Lipson, an old friend of Sussman’s. Having eaten pies from the fundraiser in previous years, she was eager to take part, and asked a friend to help.

“The only challenge I was concerned about was that here in Toronto, we are missing the ‘Thanksgiving’ component, being that Canadian Thanksgiving is celebrated in October. But we decided that the pies could be promoted as a Shabbat dessert, at least, and when we realized that this year brought the Thanksgivukkah phenomenon to the fore, we decided to market them for Hanukkah as well. In fact, we added a Hanukkah brownie pie to the option list.”

She added, “And then, of course, there are always the Americans living in Canada like me, who could certainly use a pecan pie or two to help keep American Thanksgiving alive and well in our homes in Canada.”

If all this talk about pie is making you want to place an order, here’s the important information: Deadlines are different depending on the city. To find out deadlines, prices and whether a sale is happening in your city visit Pies for Prevention.