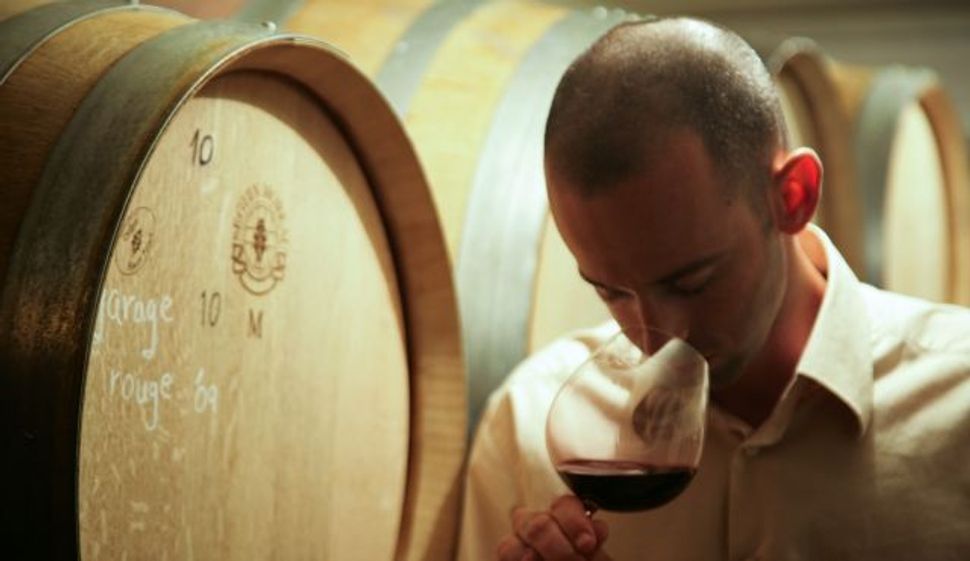 Ido Lewinsohn. Producing some of the top Israeli wines in his parents? garage. Image by Haaretz/Daniel Leilah

In nearly every biography of small Israeli wineries, there is a turning point in the plot, a time when the muse descends and the vintner decides to make wine. Sometimes the catalyst is a chance visit to a fascinating place; sometimes it is a midlife crisis or a desire to bond with the earth in the midst of a demanding career. Such tales spice up winery tours and often prompt visitors to feel, as they drink the wine, that they too might one day start a new chapter in their lives.

But with the Lewinsohn Winery in Hod Hasharon, the real story isn’t the story behind the wine, or even the garage in which the wine is made. The story here is the wine itself.

Far from breathtaking mountain landscapes, seasonal riverbeds or vineyards, Ido Lewinsohn, 35, produces a white wine and a red wine in his parents’ garage that are considered among Israel’s 10 best. If I have sometimes wondered what makes a winery significant enough to be written about, I received the best answer at the Lewinsohn Winery: You start writing when the wine compels you to.

It is tempting to use a cliche and dub Lewinsohn a “prince” of Israel’s wine industry. When his peers were just beginning to develop their careers, he had already become a winemaker at Recanati Winery. There he worked with Gil Shatsberg, who took over the winemaking from Recanati’s founder and chief winemaker, Lewis Pasco, in 2008. Together, Shatsberg and Lewinsohn spearheaded the winery’s stylistic revolution in the post-Pasco era.

With a resume that includes a bachelor’s degree in enology from the University of Milan and firsthand experience in such prestigious wineries as Israel’s Margalit Winery and Tuscany’s Tenuta San Guido, maker of the legendary Sassicaia wine, Lewinsohn is today one of the young people who are changing the image of the modern Israeli vintner. He is not someone who just fell into the profession, but someone who deliberately chose it as a career.

In the course of his training, Lewinsohn spent some time in southern France’s Rhone Valley, where he was assigned the project of establishing a new winery. Despite the opportunity of a promising career abroad, he decided to return to Israel. When the French asked this thin young man why he was abandoning their country to produce a Levantine wine, his reply was simple and to the point; he told them that he wanted to make wine at home, with his family – in the family garage, in fact (“dans le garage de papa”).

“The style that I most relate to is a cold, acidic wine,” said Lewinsohn. “The key lies in a relative early harvest of the grapes, before they mature too much.” The choice of the grape varieties takes into account the Israeli terroir. He uses Mediterranean grapes for the red wine and Chardonnay grapes for the white wine (Lewinsohn is particularly fond of Burgundy wines).

The Lewinsohn Winery produces 7,000 bottles a year. Here is a survey of its wines:

Tulip: The low-priced wine is the winner

This year, Tulip Winery celebrates its first decade. Owned by the Yitzhaki family and located in the Lower Galilee, Tulip produces 200,000 bottles annually. The winery is in Kfar Tikva, a small pastoral village that was built for people with special needs and is about 15 kilometers southeast of Haifa. Unquestionably, Tulip is one of Israel’s most popular wineries. Its popularity can be ascribed to its wines, which satisfy Israeli tastes and offer real value for money. The winery’s two basic series, Just and Mostly, are a splendid example.

To celebrate its first decade, Tulip has placed three wines on the market. The first two, Espero (NIS 89) and Creation DNA (NIS 210), are labeled as part of a new line. The third, Black Tulip (NIS 185), continues to be Tulip’s flagship wine, but spent less time in wooden casks. The goal was to make the wine more delicate and less bombastic than those Tulip has produced so far. To meet that goal, Tulip hired winemaker David Bar-Ilan a year and a half ago.

The wine that stole the show was the Espero, the lowest priced of the three. It’s a good, enjoyable wine with truly delightful aromas of mature red fruit, cocoa and a slight vegetable twist. It feels full-bodied in the mouth, releasing a gentle sweetness and offering a lovely balance, which is provided by the acidity that expresses itself in a long closing flourish with considerable presence.

This story first appeared on Haaretz.com](http://www.haaretz.com/culture/food-wine/.premium-1.561409).