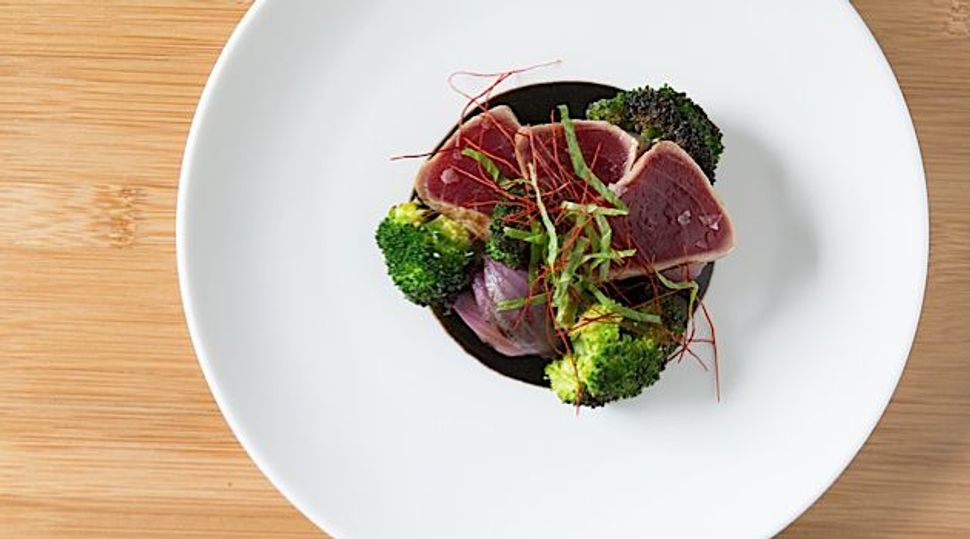 In the bathroom at Shalom Japan, a new Jewish-Japanese fusion restaurant in Williamsburg, Brooklyn, hangs a framed poster of the famous 1960s advertisement for Levy’s rye bread featuring a young Japanese boy holding a sandwich with the slogan: “You don’t have to be Jewish to love Levy’s.” Outside in the dining room, the menu at Shalom Japan, crafted by husband-and-wife chef team Aaron Israel and Sawako Okochi, mirrors the ad’s culture-melding vibe.

Take the Sake Kasu Challah, a petite braided loaf made with sake yeast and served alongside a richly flavored spread of salted butter and pureed raisins that have been plumped in Japanese rice wine. Then there’s the Tuna Tataki: squares of seared tuna served atop a velvety, ink-black sesame paste that is reminiscent of tahini. Comfort food lovers, meanwhile, can tuck into a bowl of matzo ball ramen, which throws a tangle of Japanese noodles into the traditional Jewish chicken broth with one floating matzo ball.

“We wanted to develop a place that reflected each of us and our backgrounds,” said Israel, whose Jewish food credentials include a celebrated stint as chef at artisanal delicatessen Mile End, in Brooklyn.

They are not the only ones. Five miles outside of Philadelphia in Landsdowne, Pennsylvania, chef Laura Frangiosa merges Jewish and Italian cuisines at her restaurant, The Avenue Delicatessen. “I am Italian, but I grew up eating in Jewish delis,” she said. Meanwhile, her husband and business partner, Josh Skaroff, is Jewish. “He is my chief taste tester,” she said. 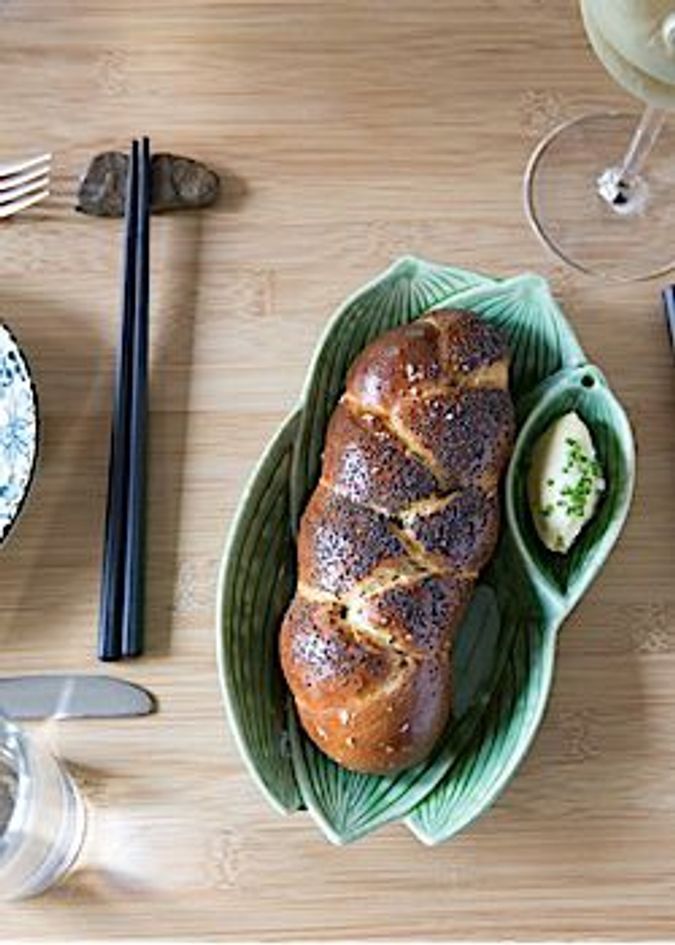 Tokyo Challah: The petite loaf at Shalom Japan is made with sake yeast and served with rice wine raisin butter. Image by alice gao/shalom japan

Open since May, The Avenue focuses mostly on serving Italian and Jewish staples side-by-side on the same menu. The challah French toast and house-cured corned beef on rye, for example, rub elbows with classic chicken parmesan and a mozzarella, tomato, and basil salad. But a handful of the dishes wade decidedly into fusion territory.

“Our Reuben Arancini are a huge hit,” Frangiosa said, describing the traditional Italian fried rice balls, which she stuffs with cubes of corned beef and Swiss cheese instead of mozzarella (à la Reuben sandwiches) and tops with Russian dressing instead of marinara. Her Jewish Wedding Soup, meanwhile, floats matzo balls in a bowl of the otherwise Italian-style meatball and escarole soup.

“Culturally, being Jewish and being Italian in America feel very similar,” Frangiosa said. “They are all about big food, big voices and big family. So it made perfect sense to combine the two traditions.” The Philadelphia Inquirer’s restaurant critic, Craig LaBan, agreed, calling Frangiosa’s cooking, “100 percent from the heart — with a side of Russian dressing.”

Across the country in Los Angeles, chefs Eric Greenspan and Roberto Treviño — who became fast friends while appearing on The Food Network show, The Next Iron Chef in 2009 — launched a Latin/Jewish-inspired food truck called El Ñosh. “Greeny and I are like brothers,” Treviño said. “We were joking around one night about Jewish- and Latin-inspired dishes, when we realized they could actually be really great.”

They launched last fall with a series of pop-up dinners in New York, Miami and Puerto Rico, serving up a menu of inventive dishes like pastrami and dill pickle croquetas, knishes stuffed with arroz con pollo and fried churros sprinkled with poppy and sesame seeds. The food truck, which will officially launch in early 2014, will offer variations on the theme: yucca latkes with mango crema, mole brisket burritos and a smoked salmon and cream cheese quesadilla. “We were blown away by how much people loved the concept,” said Treviño. “People would giggle at first, but when they ate the food, they had this amazing reaction.”

These days, Treviño, a California native, is primarily based in Puerto Rico, where he is the owner of four restaurants. But that has not stopped him and Greenspan from scheming about opening brick-and-mortar versions of their “Latin Delicatessen” in several cities including Los Angeles, New York, Las Vegas and Miami.

The menus at these new Jewish fusion restaurants vary widely, though on the Jewish side of things, they tend to skew heavily towards the foods of Eastern Europe and the delicatessen — dishes that are most widely recognized as “Jewish” by American diners. The restaurants are also, across the board, not kosher, celebrating the cultural aspects of Jewish cuisine instead of the ritual. As Israel put it, blending two cuisines is already an experiment without “opening another can of worms.”

So why does Jewish fusion seem to be hitting its stride now? With Jewish communities thriving for so many centuries across six continents, now is hardly the first time Jewish food has tangoed with other cuisines. Bagels and lox, for example, is complete fusion cuisine — a mash up that combined the Jewish love of cured fish and bread with the Scandinavian cured salmon that was available in Manhattan at the turn of the century.

For one thing, thanks to the rise of nouveau delicatessens, Jewish cuisine is more visible and exciting than it has been in decades — both within the Jewish community and beyond it. But the primary thing that ties these restaurants together is not simply trendiness, but love. Whether it’s the romance of a married couple, or the bro-mance of two chefs, Shalom Japan, The Avenue Delicatessen, and El Ñosh were all born from their owners’ desire to connect through cuisine. And diners seem delighted to support the cause.

Leah Koenig, the Forward’s monthly food columnist, is a writer and cookbook author. Her new book, “Modern Jewish Cooking,” will be published in 2015. Contact her at ingredients@forward.com