Last BBQ of the ‘Goyish Year’ 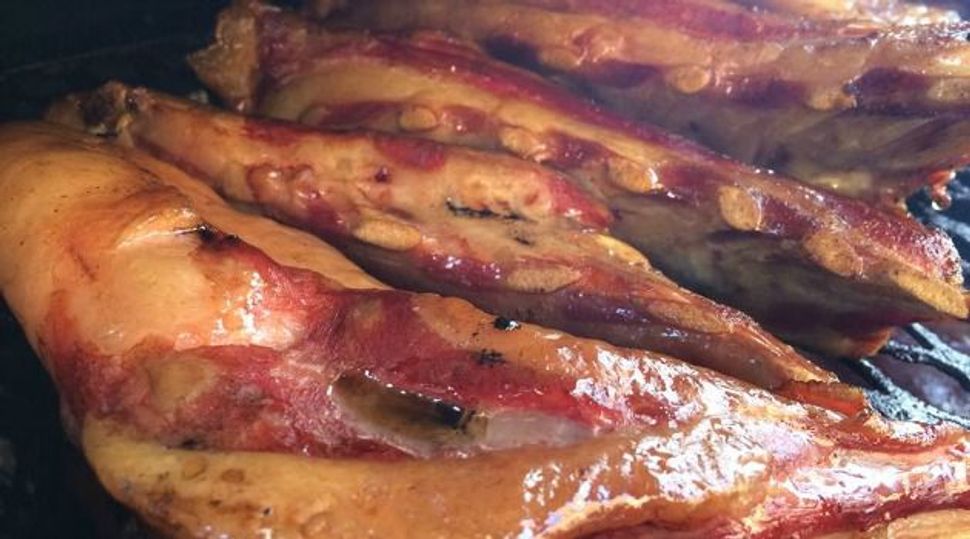 Ari White thought it was time to “show Brooklyn some love”. And he did it on Sunday and Monday — with 2,500 pounds of meat.

But White’s custom-built “BBQ rig” had never graced the streets of Brooklyn, where the Wandering Que boasts a fiercely loyal following.

So under a tent in the parking lot of Crown Heights shul Chevra Ahavas Yisroel, White served up beef ribs, brisket, lamb shanks, lamb “bacon”, and turkey legs to hungry carnivores who schlepped from across the city to sample his celebrated kosher ‘cue. The pop-up, a fundraiser for the Orthodox synagogue, was billed on Facebook as “the last Que of the Goyisha Year.”

While it sounds daunting to barbecue for a cast of thousands — this writer has incinerated meat while attempting to grill for two — White came to Brooklyn with heavy equipment.

“My 18-foot, 4700-pound BBQ rig was made for the big leagues by one of the country’s top pit makers, Gator Pits of Houston, Texas,” White told the Forward the night before the massive cookout. “We can smoke food for up to 1000 people at a time out of it. Preparing this quantity of ‘que is painstakingly laborious, though, and I am both lucky and blessed to have a great pitcrew that put in hundreds of man-hours to make this happen.”

White doesn’t divulge his rubs or recipes, but the El Paso-born, third-generation smoker did reveal that “everything is rubbed down with our twelve-spice rub and then smoked using a combination of woods. Oak and apple for the ribs and brisket, mulberry for the lamb shanks, hickory for the lamb bacon, and mesquite for the turkey legs. Eight to eighteen hours of low and slow are the only other ingredients that make this Que sing,” he said.

On Facebook, White also revealed the provenance of his raw ingredients: “Brisket & Chicken offerings are from Agristar (Aarons Best); Turkey, Ribs & Lamb offerings are from Alle (Mealmart); We operate under the Rabbinical Supervision of the STAR-K; Bread is Pas Yisroel — Veggies are Bodek — Mashgiach Tmidi.”

The Brooklyn menu started at $2 for corn bread with poblano chile and $4 for an all-beef hot dog, and ran up to $36 for a one-pound Smokehouse Brisket Texan Size Platter and $45-$55 for BBQ Long Bone Beef Rib Platters. A one-pound “burnt ends” platter went for $40.

The Brooklyn event broke records, White said on Facebook. In spring and fall, White will take Wandering Que on the road again, with weekly pop-ups at either NYC street festivals or similar fundraisers “all over the Tri-state,” he said.

Last BBQ of the ‘Goyish Year’