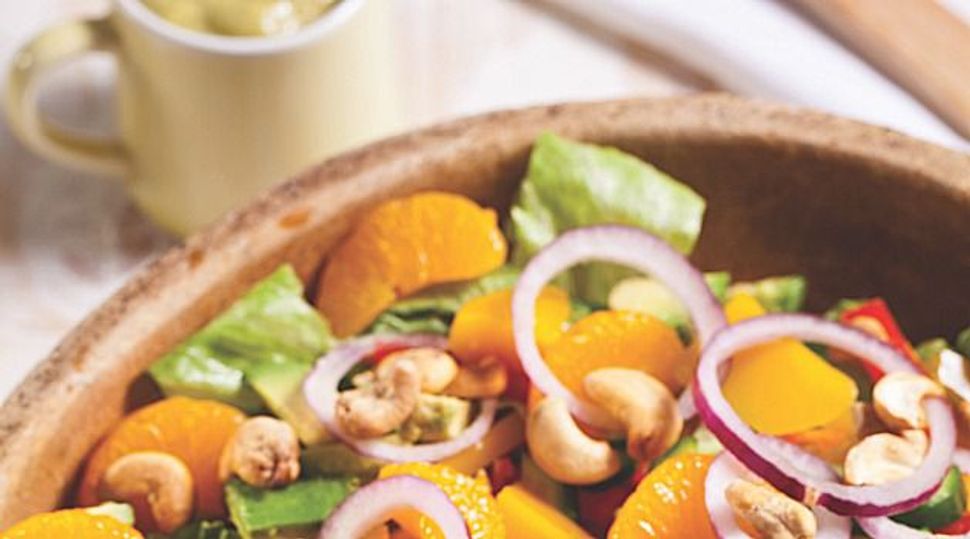 I have to admit that while chopping garlic or sautéing onions, my mind is likely to wander to wondering about the completed dish, thinking about the next step, or about who I need to call when I’m done.

Thinking about the Torah portion of the week is not likely to make it onto that list.

Enter Rena Rossner. Her new book, “Eating the Bible: Over 50 Delicious Recipes to Feed Your Body and Nourish Your Soul” (Skyhorse Publishing) has grown out of a column that she writes for the Jerusalem Post, “The Weekly Portion,” in which the Jerusalem-based mother of five combines biblical verses with recipes inspired by them, hoping that you can feed your mind at the same time you’re working to feed your family.

Each recipe is preceded by a page or two comprising of a verse or two from the Bible, commentary on that verse, and then a recipe inspired by it. On the recipe page – which is usually opposite a photo of said recipe – she gives a few ideas to modify the recipe, and questions that can be asked about that verse.

For example, a recipe for red lentil soup is preceded by “And Esau said to Jacob, ‘Please give some of this red, red stew, for I am faint,’; and he was therefore named Edom.”

This is followed by her commentary on the story of Jacob and Esau and the birthright, followed by a recipe, other red foods that could be served to spark the same discussion, and the following questions: “Why did Esau think that he was about to die? Why do you think he calls the food that Jacob is cooking ‘red’ twice? Why does the Bible then make the point of telling us that it is because of this request of his (or this incident) that he is called ‘Edom?’”

While I feel completely proficient at judging a cookbook by its recipes, I felt less confident about this particular book, given its particular slant, so I invited back my favorite Bay Area power couple (their description), one of whom is a rabbi, along with my cousin and his partner. Recipes aside, Rabbi Mike thought the book would be ideal for family education.

We began with the red lentil soup. While it was seasoned well, and the suggested squeeze of lemon juice as well as a drizzle of olive oil (my idea) were good accents, everyone was unanimous that it would have benefitted from more spice.

“The patriarchs were very wealthy, so they could have afforded more spices,” said Anthony, while Mel said “Every cookbook has a lentil soup and most of them are better than this one.”

Mike said it was good, “but not worthy of a birthright.” Paulie seemed to like it better than everyone else, but when asked “Would You Make This?” everyone said yes, only with modifications of more spice.

Rossner ties her Festive Golden Brisket to the story of the Golden Calf, and therefore it has chunks of carrots, sweet potatoes, and potatoes cooked in a sauce made mostly with apricot jam, ketchup, mustard, mandarin oranges and their juice, giving it a golden hue. I was hesitant when I saw one cup of brown sugar in the recipe, and only added a fraction of that to the braising liquid in the beginning. When I tasted the sauce later, I left out the additional sugar.

While the brisket was edible, if I had used one cup of brown sugar as written, we probably wouldn’t have been able to eat it. Mike said it tasted like brisket and tzimmes combined. We all ate it, but felt it was much too sweet, so when asked “Would You Make This?” everyone said no.

I accompanied the brisket with Technicolor Salad with Silky Avocado Dressing, which obviously accompanies the story of Joseph and his Technicolor Coat. We all agreed that coming up with such dishes, to link them to biblical stories was quite clever, since all foods can’t be as easily found in the Bible as red lentils.

While this salad, which has mango and mandarin oranges in addition to the more savory elements, is also quite sweet, an avocado dressing spiked with cayenne saved it from going over.

Mike, a spicy food fan, said he never thought to make a spicy salad dressing, while some others said that same kick should have been in the soup. Anthony especially loved the cashews. When asked “Would you make this?” everyone said yes.

Last, a Marble Pound Cake with a Hard Chocolate Crust (the hard chocolate refers to Jacob’s neck turning to hard marble, and in the cake, it’s made by affixing chocolate chips to the cake when it’s still hot, and then smoothing them into a crust).

I have to admit I didn’t have high hopes for this cake. Given the power couple being kosher, I had to make this cake parve, when I knew it would taste better with butter, and I pretty much despise desserts made with margarine. I took a risk making it with coconut oil instead, and while the batter required some additional water to aid the beating process, the results were better than expected.

Anthony said it was positively “buttery,” even though there was no butter involved, and while no one detected it right away, everyone appreciated the subtle orange flavor. It also wasn’t too sweet, causing us to joke that perhaps I should have served the cake as the main dish, with the brisket for dessert. While I often prefer richer desserts than pound cake, for a pound cake to be served with coffee, this is quite a good one, especially with the coconut oil substitution. “Would You Make This?” As a coffee cake, yes.