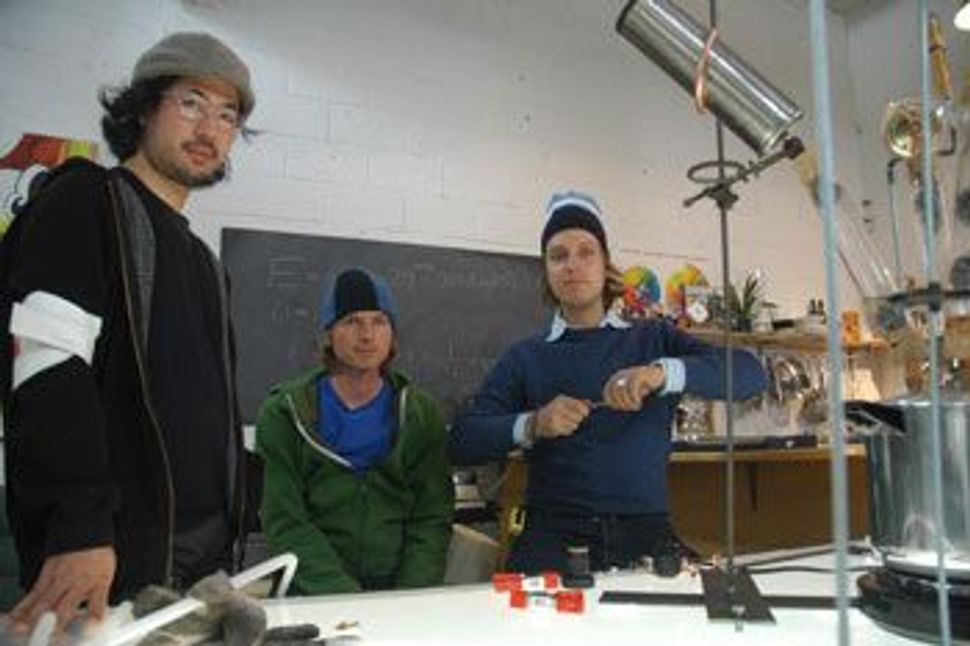 Adilman’s best known up north as a creator of “Food Jammers”, in which he and two cohorts came up “with brilliant designs for culinary contraptions” like a charcoal-powered fish-and-chip fryer, homemade food dehydrator, and a cheese-cultivating, DIY bacteria cave. Adilman has a long television resume, from writing Canadian shows to acting in Canuck hits like Trailer Park Boys.

In between table-hopping — at least that’s how we imagine it — Adilman spoke to the Forward about Toronto delis, vegan soup, and his Japanese mother’s mandel broit.

You’re the son of a Jewish father [the late Toronto Star entertainment reporter Sid Adilman] and Japanese mother [scholar Toshiko Adilman]. What kind of food did you grow up with?
My father could barely cook an omelet. But he had a weekly habit of clipping recipes from the New York Times Magazine into a compendium of binders with dishes he would not so subtly suggest my mother make. She can cook just about anything so she conquered it all. Her Jewish cuisines won over my Jewish grandmother. A number of VIP Jews in Toronto regularly request her mandel broit, as long as she never tells their mothers. Side note: I am planning to make a short film that catalogues all these recipes.

You pitched a show about finding other “Jewpanese”, which was rejected as “too niche”. What was that about? Yea, years ago I pitched a TV show titled “Getting To Nobu: Putting The Jew In Jewpanese.” The concept was that I would learn more about my Jewish side, while traveling the world to understand what it means to be Jewish today. Coming from the TV world, I thought it was a slam-dunk, but apparently I was wrong. Now my friend, Daveed, really wants us to produce a show called “Old Jews Camping.” We would literally take older Jews camping and film the adventure! Both would kill.

Editor of Eater Toronto seems like a big job. What perspective are you bringing to it?
No kidding! Keeping pace with Toronto’s food scene is a great challenge. I want to cover all of the city — not just downtown — and inspire people to eat outside their comfort zones.

Toronto’s become a home of deli revival, with Caplansky’s, and still has Jewish-flavored places like Free Times. Does the city have a particular appreciation for Jewish food?
I can’t tell you how happy I was to meet Zane Caplansky. At the time, he was operating out of the kitchen at the Monarch Tavern. When he opened his flagship restaurant, my brother and I were at his menu tasting and ate for three hours straight.

But it’ll take many more Zanes to really elevate the presence of Jewish food in the city. Institutions like Centre Street Deli, United Bakers Dairy Restaurant, and Moe Pancers continue to be standouts but it’s a real trek for the downtown crowd.

New York’s having a Jewish-Japanese moment right now, with Aaron Israel at Shalom Japan, Shaul Margulies at Zenkichi, Ivan Orkin cooking ramen at Slurp Shop. What’s the affinity, do you think?
Japanese and Jewish cultures have so much cult status so it’s only natural that their cuisines should come together under one roof. As far as I know, Toronto hasn’t gone there yet but my mate Daveed Goldman and I will be chef-ing a popup Jewpanese kitchen late February for a local gallery fundraiser. The menu isn’t set but one dish we’ve talked about is Smoked Meat Maki.

What’s your ideal Toronto meal, if you’re picking a starter from one place, main from another, dessert from a third, and a cocktail?
Ursa’s root vegetable salad to start; a large selection of Don Don Izakaya’s hay-smoked fish for a main; a Baker Bots ice cream sandwich to finish; and a Manhattan from The Harbord Room.

How many nights a week do you dine out? And what do you cook when you eat at home?
I used to eat out about five times a week but, these days, I dine in more often than not. Lately, I’ve been digging making thin-crust pizzas from scratch. I am obsessed with figuring out the ultimate soup — and since my girlfriend is a vegan, I am trying to do it without meat. But I love making gyoza, and that needs the pork. A close friend smokes his own salmon in his backyard so I try to eat that as often as possible. I love Tuscan cuisine; it has taught me not to overly complicate dishes with excessive seasoning. Vegetables should be able to hold their own – though always with quality olive oil. I am about to start making my own quinoa pasta — it’s lighter and just as flavorful. But my standby for all time is broiled salmon, lightly salted, on white Japanese rice. That’s my Kraft Dinner.