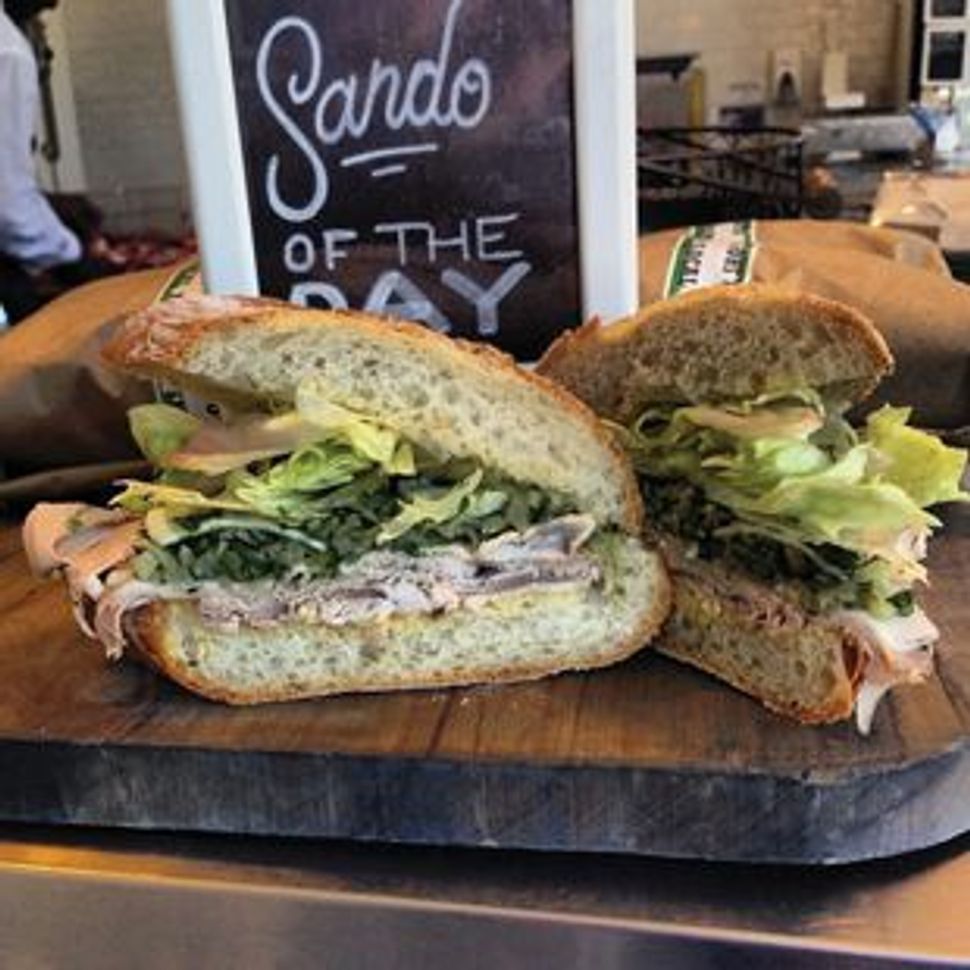 When it comes to filling a job in the food industry, one wouldn’t think that “Camp Tawonga” on a resume would have a lot of sway. But if we’re talking about the Local Butcher Shop in Berkeley, co-owner Monica Rocchino says it’s “a no-brainer.” 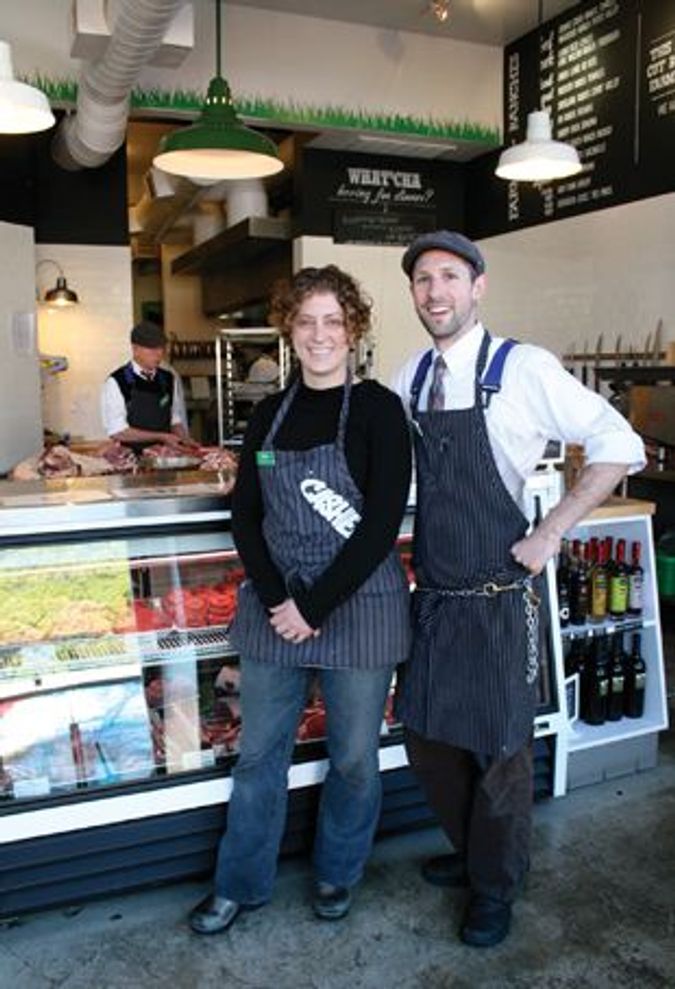 Rocchino, who grew up attending the Jewish camp and then worked on staff, says, “Someone from camp, especially who worked there multiple years, is going to be a great employee.” She knows they’ve learned great leadership and communication skills as well as how to work as a team, she adds.

Sure enough, Kel Troughton and Aaron Lurie — who both worked in Tawonga’s kitchen, Troughton as kitchen manager — have now found work at the Local Butcher Shop.

The Gourmet Ghetto store, which opened in August 2011 and quickly signed on new neighbor Saul’s Deli as one of its early customers, is co-owned by Monica, 35, and her husband, Aaron Rocchino, 31. The pair met while working at Oliveto, a trendsetting Italian restaurant in Oakland.

Monica Rocchino (nee Pallie) grew up in San Rafael in a Jewish family that loved to entertain and cook, and her husband’s grandfather is a rancher in Pennsylvania Amish country. Still, nothing in their backgrounds suggested they’d end up in the butchery business.

After Oliveto, Aaron went to Chez Panisse and Monica returned to Paula LeDuc Catering, where she had worked before as an event planner.

Newly married, he was working nights while she was working days, meaning they never saw each other. They sought to change that, and began to think of doing something in which they would have a greater impact on their community. Meanwhile, they observed that “it was hard to get locally raised, sustainably grown meat that we could trust — unless Aaron brought it home from the restaurant,” Monica says. “We had the best access of anybody, and if we were having problems, everyone was.”

Aaron had learned butchery at Oliveto and Chez Panisse, and therefore had begun developing relationships with local ranchers. When he began asking them whether they’d sell to retailers as opposed to only restaurants, they said they would.

And the idea for the Local Butcher Shop was born. 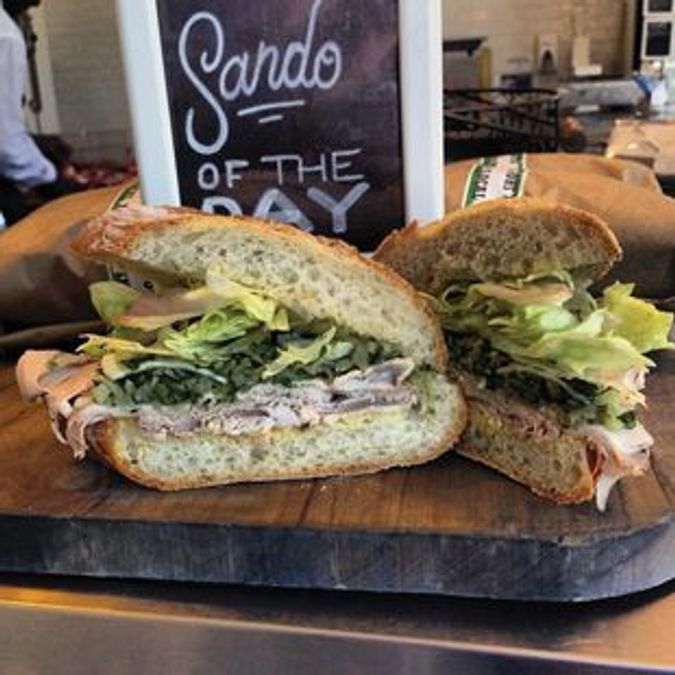 “We have such great cheese, bakeries, and so many farmers markets,” Monica says. “But even at the farmers markets, the meat has been frozen, and it’s already pre-cut so if you want a specific cut, you can’t get it.”

All the meat at the Local Butcher Shop is antibiotic- and hormone-free. The animals are raised and slaughtered within 150 miles, and all are raised on pasture except rabbit and quail, because “if you raise rabbit and quail on pasture, you don’t have rabbit or quail,” Monica says.

They deal with no middlemen, all animals come whole, and the shop uses every part — whether it’s selling the organ meat to ethnic communities that cook with such meat, making dog food, smoking pig’s hooves for people to add in their beans or using tallow for soap. Cows arrive in quarters — in order to fit through the door — and pigs arrive cut in half. Chickens are sold with their heads and feet, unless customers choose otherwise.

Monica spoke on a panel at the JCC of the East Bay in June 2012, alongside Karen Adelman, co-owner of Saul’s deli, and Matt Cohen, the founder of the Off the Grid food truck enterprise. One of her main points: That even though the Local Butcher Shop doesn’t carry kosher meat, the practices employed by her and her husband actually surpass kosher standards.

In fact, she says, the way she and her husband respect the animal is close to what the original kosher laws were about.

Rather than following the rule of the Torah, she says she feels they are honoring the intent of the Torah. Noting that she is hardly a Torah scholar, Monica says, “It seems the intent was to take good care of your animals and treat them with respect, and the method of killing them was intended to be as pain-free as possible.”

Unfortunately, she adds, she sees the kosher meat industry doing the opposite, with most kosher meat coming from feedlots. “Animals are standing in their own waste, full of antibiotics, with all the horrors we hear about conventional meat except for the method of slaughter,” she says.

“Having an animal that’s been well-raised, that has access to pasture its whole life from birth to slaughter and then is killed in a humane way — even if it’s not in the presence of the rabbi and not slaughtered with a knife across the neck — to me that makes the animal more kosher in the sense of what the intent was.”

Alix Wall is a personal chef in the East Bay and beyond. Her website is The Organic Epicure.