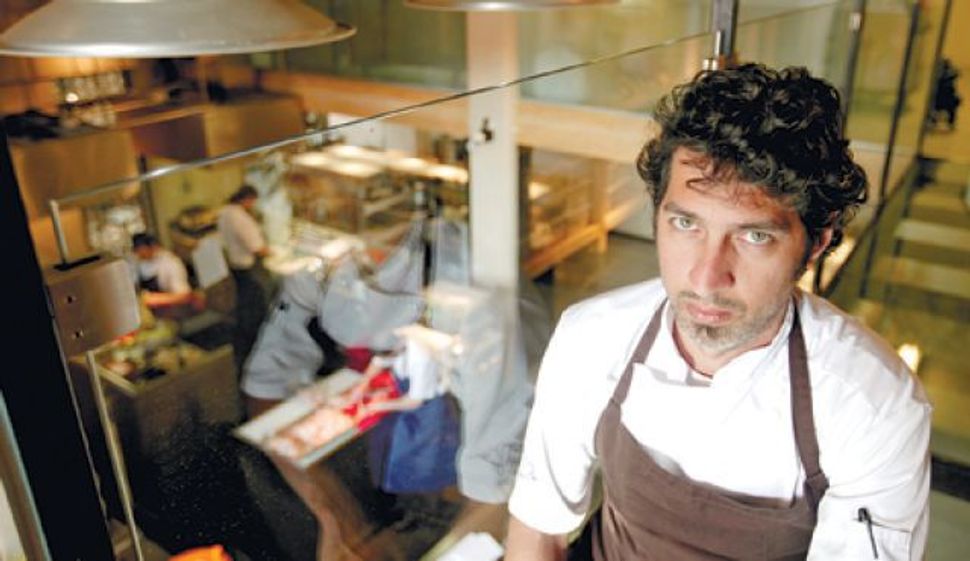 Eldad Shem Tov watches over his kitchen at Shakuf in 2011. Photo: Courtesy of Haaretz.

New York’s food scene is one of the most rapidly changing on the planet. But every once in a while, it pauses — and critics, chefs and hungry city dwellers seem to hone in on one restaurant. Lately, that spot has been Glasserie, a creative Middle Eastern inflected restaurant in a desolate corner of Greenpoint.

Chef Sara Kramer, who built the restaurant’s menu of lamb and bulgur croquettes, an extraordinary whole rabbit dish and sides of tahini and labneh, announced today that she will leaving Glasserie’s kitchen in the coming weeks. Israeli-born Eldad Shem Tov, who trained at Noma and already works alongside Kramer, will be taking her place. With the move, he’ll join the ranks of only a handful of Israeli-born chefs to captain a restaurant that’s garnered national attention.

Two years ago Shem Tov was running Shakuf, perhaps the most high-minded restaurants to ever come to Israel. The Jaffa-based restaurant served 60 diners around a U-shaped kitchen, which served as dinner theater. “I saw what a European restaurant looks like, how much the chefs put into it, and I started conceptualizing Shakuf,” he told Haaretz in 2011. “Israeli restaurants, even the finest ones, work with eight raw materials and four cooking methods. I wanted to diversify. Not another yogurt, olive oil, seared shrimp, beef chunks and lentils on an electric grill. I wanted to study the vegetables around us and give them a different and more in-depth treatment.”

Since leaving Shakuf, Shem Tov’s style seems to have relaxed. Glasserie owner Sara Conklin told Grub Street: “His food is soulful and rustic, and a natural fit for Glasserie.”

Whether he’ll change up the menu — and whether Glasserie will continue to hold New York’s attention — is still unknown.