The Mystery of the ‘Jewish Woman’s Cookbook’ 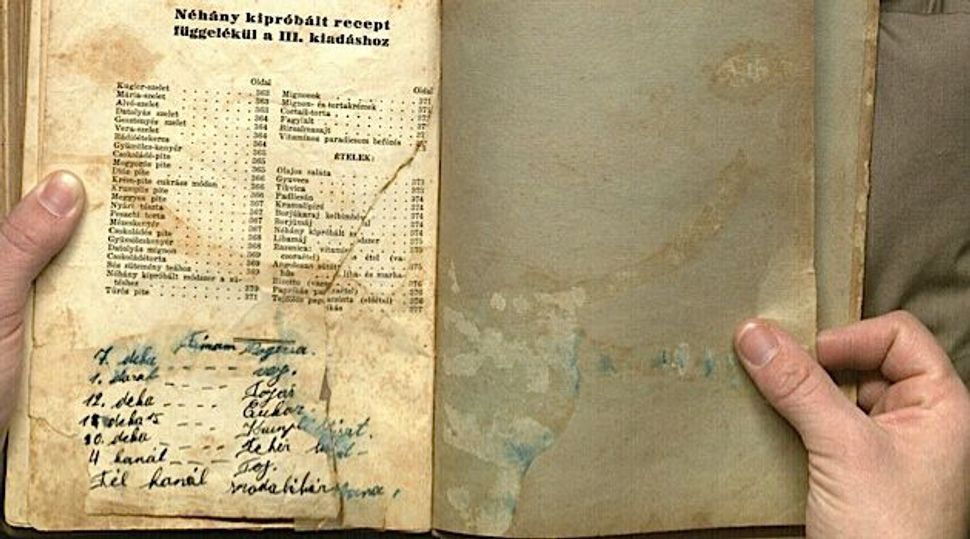 Tara Lotstein purchased a Hungarian-Jewish cookbook, with a recipe written at the back, that made it through the Holocaust. (Courtesy of Tara Lotstein)

BALTIMORE (JTA) — The tattered book with the beige cover was just the sort of thing Tara Lotstein was looking to purchase when she found it online in late 2012.

Its title was “A Jewish Woman’s Cookbook” and after the book arrived by mail, it joined a special, short stack of Lotstein’s acquisitions that includes a Siddur, a High Holy Days machzor and a Passover Haggadah.

All four books are in Hungarian, a language Lotstein learned on the way to completing a master’s degree in 2011 in Russian and Central European studies.

The cookbook’s recipes and apparent pre-World War II printing are enough for the 29-year-old Lotstein, a researcher and translator who lives in Silver Spring, Md., to consider her $145 purchase worthwhile. But four scribbles in it really piqued her interest, and now she would like to locate the people behind the writings and present the cookbook to one of them.

“In memory of a really good friend,” reads the cursive on the back of the title page, signed by “Irene.” In capitalized print, at the bottom of the page, someone wrote “Admont October 7, 1946.”

On the opposite page, in the margin of the foreword, more hand-printed words: the name “Izsak Roth” and “Kolozsvar.” And on the very last page of text, someone jotted a recipe for pogacsa: puffy, light dinner rolls.

Those additions indicate the writers were Hungarian, Lotstein said. Kolozsvar is the Hungarian name of Cluj-Napoca, a city in Romania. Admont was the name of a displaced persons camp set up in Austria following World War II. Lotstein figures that someone was given the book while at Admont.

She doesn’t know who Izsak Roth was, beyond likely being a young boy — a deduction based on his handwriting — or Irene, or the pogasca maker. The cookbook’s author is a Mrs. Martin Rosenfeld, while a Mrs. Moses Deutsch wrote a foreword in which she is identified as the wife of the chief Orthodox rabbi of Subotica, a town that was then part of Yugoslavia and is now Serbian.

“I thought I could find the descendants of the names in this book: What happened to Moshe Deutsch, this young boy Izsak Roth? Did they survive? Would [the descendants] want this book because their relatives are in it?” Lotstein said.

The name of the Budapest publishing house of A. Femes appears but not a publication date. Nor are the first names of the Rosenfeld and Deutsch women given — only their husbands’. “Seeking Kin” sought to learn the fates of those two women and of the boy, but a United States Holocaust Memorial Museum researcher said that their names are too common to yield results quickly.

The book could be of great interest to the museum, said Peter Black, the museum’s senior historian.

If it were written during the Holocaust “or had meaning for someone who was impacted by the Holocaust,” said Black, “it would be considered a Holocaust artifact.”

“We’d be interested in taking the book into our archives, if the owner would be willing,” he said of Lotstein.

Black said he’s aware of one book in the museum’s archives that someone carried through the end of the Holocaust. A book generally didn’t remain in a person’s possession through their imprisonment in a concentration camp — even if it wasn’t confiscated — because it couldn’t help an inmate survive, he said.

“My guess is that the book was important to [the author] or its owner, and was something that held sufficient sentimental value … reminiscent of the pre-war world that was now gone,” he said. “It could have been the author’s only copy.”

Another possibility is that it belonged to someone from Budapest, since Jews living in the Hungarian capital were not deported to Auschwitz, as were other Hungarian Jews, Black explained. “If the [book’s] owner moved from Cluj to Budapest before the German occupation, and then went to the DP camp in Austria, the person may never have been deported at all,” he said.

In her foreword, Mrs. Rosenfeld wrote that her grandmother wanted to help Jewish women appreciate traditional cooking and thereby become more observant, according to Lotstein’s translation.

Lotstein herself grew up in a nonobservant home in Palm Springs, Calif., and became more observant in college. She said she has learned much by reading the book, from the traditions regarding kosher dietary laws to practical advice on food preparation.

Lotstein hasn’t yet prepared any of the recipes, primarily because the author omitted two key pieces of information throughout: what kind of pan to use for the cakes and at what temperatures the oven should be set. But Lotstein said she’s stunned by the quantity of butter called for in the dairy pastries.

What dishes would Lotstein most like to prepare? The paprika-influenced beef dishes, like goulash and marha porkolt, and such desserts as sacher torte.

“I love it because it’s Hungarian, and the recipes are 75 years old. I can read all of it,” she said of the cookbook. “I was looking for Hungarian Judaica, and this is something special. The fact that [it] survived the war — I was thrilled to find it.”

(Please email Hillel Kuttler at [email protected] if you know the whereabouts of the people mentioned in this cookbook or their relatives. If you would like “Seeking Kin” to write about your search for long-lost relatives and friends, please include the principal facts and your contact information in a brief email. “Seeking Kin” is sponsored by Bryna Shuchat and Joshua Landes and family in loving memory of their mother and grandmother, Miriam Shuchat, a lifelong uniter of the Jewish people.)

The Mystery of the ‘Jewish Woman’s Cookbook’