An African-Israeli Cafe Grows in Harlem 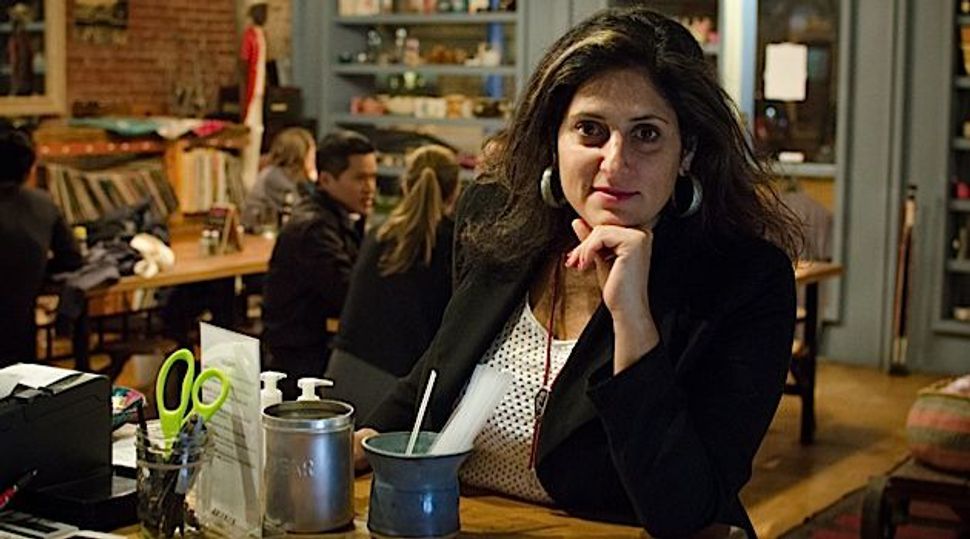 One doesn’t expect to see a mezuzah outside a restaurant in the midst of a bustling Harlem street. The block of 116th street and Frederick Douglass Boulevard is lined with bodegas, hardware stores and soul food spots. But upon closer inspection the embellished clay ornament at the light blue store front of Silvana, a café and shop, reveals it’s a mezuzah.

Silvana’s tall shop windows are filled with a variety of colorful items that appear to stem from all over the world – from candles and African wood figurines to hookahs and jewelry. “Shwarma/Falafel/Bar/Live Music/Boutique/Café” is printed on the marquee, which seems like a lot for one venue. But everything falls into place inside, where you find yourself in a living room between Israel and Africa, with partly exposed red brick walls, a dark red carpet on the hardwood floor, and large wooden tables that customers share. Some work on their computers, while others munch on cakes or falafel sandwiches.

Opened in June 2013, the place reflects the vision and story of the owners, Sivan Baron and Abdel Kader Ouedraogo. Baron, 40, grew up in Ramat Gan and came to New York to complete her degree in architecture 15 years ago. She met her husband, a native of Burkina Faso, when she was working in a French restaurant. The interfaith couple who celebrate both Muslim and Jewish holidays, owns two other popular restaurants in the area, Shrine Bar, a world music venue, and the French bistro Yatenga, which are next to one another on Adam Clayton Powell Boulevard near 134th Street.

Silvana is different yet again: They wanted to introduce Israeli food to the neighborhood. The menu is hardly experimental, but features all the classics at good quality and decent prices, from tahini, hummus and tabbouleh to lamb and chicken shawarma and shakshuka. Silvana is also designed to be social hub that cuts across age, class and profession: “You see firefighters, professors, students, kids and taxi drivers,” said Baron.

On a recent Friday evening, the café was almost empty, but a decent crowd has gathered in the unexpectedly large, but still intimate basement, which sports a hookah lounge, a bar, several tables and a small stage, on which a local band performs together with Aliah Sheffield, a young singer from New Jersey. The audience — diverse indeed, but no firefighters in uniform — seems to enjoy the soul music despite the microphone’s slightly too high volume.

The incredibly well designed atmosphere of the place suggests that Baron — who was nicknamed Silvana by a friend’s grandmother as a child — knows what she’s doing. She lost her job as an architect during the recession of 2008, while she was pregnant with her second child, but she has found a new artistic outlet through the restaurants. Even though the work is demanding — “It feels like having five kids,” the mother of two said — she enjoyed designing the logo, menus, interior design and choosing the retail products. Some come from across the globe, others are made by local designers, and there are a few, such as the mezuzah which were made by hand in Israel by Baron’s cousin.

An African-Israeli Cafe Grows in Harlem