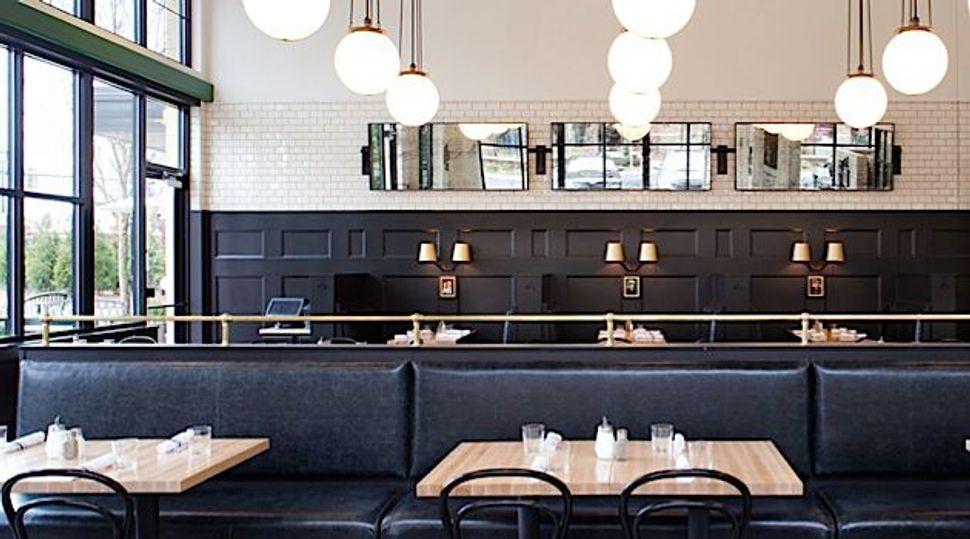 It could be because your apartment doesn’t fit your mishpokhe without turning your bed into additional seats. It could be because making matzo balls ends in a family dispute on the best rolling technique. Or it could be because you interpret the tradition of leaning at the Seder as leaning back instead of cooking. No matter what keeps you from hosting this year’s Passover dinner at home, restaurants across the country have a solution for you. Seders are offered with or without ceremony and feature menus for traditionalists, that include all-time Passover favorites, such as gefilte fish, brisket and flourless chocolate cake, as well as some reimagined Passover fare — asparagus wrapped in lamb bacon or an“11th Plague” cocktail, anyone?

Unless otherwise the noted, the restaurants accept reservations throughout the evening.

Kutsher’s Tribeca
186 Franklin St., (212) 431-0606
This high class American Jewish bistro went all out with the names on the menu, offering Crispy Artichokes Alla Judea with shaved parmesan and lemon emulsion and Elijah’s Dream, consisting of macaroons, nutella, halvah, marshmallow twists and jellies for dessert. For the main course, there is the choice between lamb brisket, roast chicken, pan roasted trout or quinoa gratin.
Details: April 14 and 15. Seatings at 5 to 6pm and 8 to 9pm. $85 per person ($49 for children 10 and under). Seder plate and Haggadahs are provided.

Telepan
72 West 69th St., (212) 580-4300
A Seder-style menu is available at this Upper West Side Greenmarket restaurant if the entire table participates. A selection of Passover amuse (smoked trout potato latke, chopped liver and dried fruit chutney-apple salad), hanger steak, brisket and wild striped bass is on the four-course menu. Kosher wines can be purchased. Details: April 14 and 15. $95 per person.

Abigael’s on Broadway
1407 Broadway (at 39th St.), (212) 575-1407
At the (self-described) “world’s largest and most prestigious kosher restaurant,” chef Jeff Nathan will serve an award-winning chicken soup, gefilte fish and other Passover classics. For an extra $6 you can have a char-grilled rib steak. Details: April 14 and 15. Seating at 7pm for private and 7:45 for communal Seder. $135 per person ($65 for children 10 and under). Haggadahs, Seder plate and Kiddush wine are provided.

Balaboosta
214 Mulberry St., (212) 966-7366
If you are lucky enough to grab one of the 55 spots at Balaboosta’s dining room, you can expect a four-course, Italian-influenced menu cooked by chef Einat Admony with Missy Robbins and Mindy Segal. The dinner will feature leeks and Swiss-chard cakes, braised short ribs with walnuts, sweet garlic and date and flourless chocolate cake, as well as a live band and afikoman hunt.
Details: April 15. Seating at 6:30. $125 per person. Includes wine pairings.

Joe & Misses Doe
45 East 1st St., (212) 780-0262
If you can’t make it home to your Bubby for Pesach, Joe and Jill Dobias invite you to join their Progressive Passover, which promises to include an iPod Passover playlist, a Seder sampler, matzo ball soup and slow-roasted brisket. For an additional $10 they serve Elijah’s Punch, a cocktail that contains rum, Manischewitz, soaked fruit and “other holy things.”
Details: April 14, 15 and 16. $75 per person.

Talia’s Steakhouse
668 Amsterdam Avenue (at 93rd St.), (212) 580-3770
The kosher Upper West Side hotspot that’s known for its kosher cheeseburgers (using soy cheese), remains traditional with its Passover menu that includes beef brisket, chicken breast marsala and Moroccan salmon as well as the option to join a communal Seder. To counter chol hamoed carbs cravings, Talia’s serves kosher-for-Passover hot dogs and sandwiches.
Details: April 14 and 15. Seatings at 5pm and 8pm. $84.99 per person ($59.99 for children 11 and under). Seder plates and Kiddush wine are provided.

Craigie On Main
853 Main St., Cambridge, MA, (617) 497-5511
A menu for every appetite promises to be available at Craigie On Main: There is a choice between a three-course prix fixe menu and a six- or eight-course tasting menu. The Passover favorites, which include matzoh-crusted halibut, tamarind and apricot-braised short ribs and asparagus a la Schmaltz, are also available a la carte. While seder plates are available upon request, guests have to bring their own haggadahs. Details: April 15 and 16. $67 per person for three-course, $98 for six-course, $118 for eight-course menu.

Lumiere
1293 Washington St., Newton, MA, (617) 244-9199
A family-style meal with all the Passover dishes we know from our Bubbe — from matzo ball soup and charoset with “matzo pita” to braised veal and dark chocolate soufflé — will be served at Lumiere. A rabbi will guide through the evening, and expect to do some singing, as there will be a band.
Details: April 14 and 15. Seating at 6pm. $100 per person ($65 for children 12 and under). Includes wine.

Jar
8225 Beverly Boulevard, (323) 655-6566
This is not your usual Seder: For the multicultural evening, chef Suzanne Tracht has invited three Middle Eastern teens from Israel to talk about their experiences with Ultimate Peace, a program that unites Jewish and Arab youth using Ultimate Frisbee. An informal Seder service is followed by dinner, which includes asparagus and spring radish salad, Jar’s signature pot roast, Alaskan halibut and assorted macaroons.
Details: April 14 and 15. Seatings at 5:30. $130 per person ($55 for children 12 and under). Includes tax, gratuity and house wine.

[Comal][15]
2020 Shattuck Avenue, (510) 926-6300
Jalapeno matzo balls, anyone? Comal hosts its second Mexican-inspired seder, which promises to “forego haggadahs for lively conversation at the communal table” which fits no more than 22 diners. Tequila-cured salmon, beef brisket in adobo sauce and mandarin raspado are some of the highlights on the family-style menu.
Details: April 14 and 15. Seating at 6:30. $60 per person, including gratuity.

London Grill
2301-2303 Fairmount Avenue, (215) 978-4545
The grill and wine bar in Philadelphia promises to go all plague-style: The decoration of the restaurant will be frog-themed, and a special cocktail called “The 11th Plague” (Manischewitz, walnut liqueur, Absolut, rhubarb bitters) will be available. The Seder menu will be served all week.
Details: April 14 to April 22. $45 per person ($20 for children 11 and under). Haggadahs and Seder plate are provided.

Zahav
237 St. James Place, (215) 625-8800
The Israeli restaurant hosts a Passover Mesibah (party) on the first two nights of the holiday. The highlights of the Passover-style tasting menu include beets and horseradish with salmon caviar, smoked trout fritters and slow-roasted short ribs.
Details: April 14 and 15. Seatings available between 5 and 10pm. $39 per person (half-price for children 12 and under, free for children 5 and under). Seder plate is provided.

The General Muir
1540 Avenue Place B-320, (678) 927-9131
Self-described as a tribute to the New York Jewish deli in Atlanta, The General Muir (named after the ship on which co-owner Jennifer Johnson’s mother cane to the United States in 1949) offers Seder menus that sport house-baked matzo, brisket and gefilte fish cooked by chef Todd Ginsberg, who is a 2014 James Beard Foundation Award Semifinalist.
Details: April 14 and 15. $68 per person (includes wine pairings; $48 for dinner only). Reservations available between 5:30 and 8pm. Seder plate available for $20.