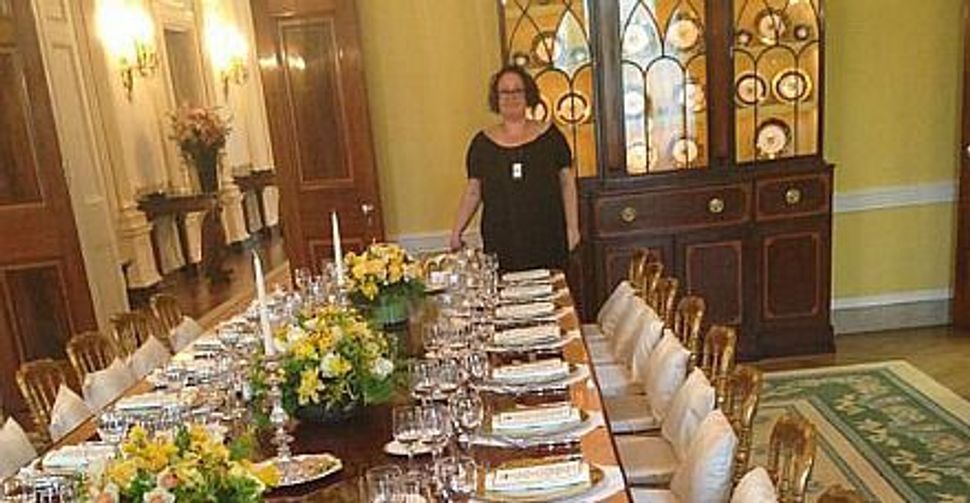 (Haaretz) — Cooking for twenty people doesn’t usually faze me, even when it’s for a Passover Seder, but the Seder I helped prepare last night was for Michelle and Barack Obama.

After days of long discussions about menu options and in order to add some interest, it was decided that alongside the Passover classics, such as gefilte fish and matzo ball soup, I will make quinoa in coconut milk with roasted sweet potatoes and Tuscan kale. My friend Susan Barocas, former director of the Jewish Food Experience, who was working with me as well, prepared chicken in pickled lemon and olives.

The tradition of making a Passover Seder at the Obama household started in 2008, while he was running for President. The first seder took place at a hotel basement hall during a campaign stop, and the blessing “next year in Jerusalem” was modified to “next year at the White House.” And so a tradition began. Keeping their seder private and intimate, the Obamas continue to host the same guests every year at the White House ever since.

We arrived at the White House early on Tuesday morning. We arrived at a surprisingly small kitchen, peeking at the beautiful flower arranging room on the way. Cris Comerford, White House executive chef, met us at the kitchen. As top chef, Cris is often in charge of much larger events, including State Dinner, yet she amazed me with the amount of research and the sincere interest she showed in the Jewish traditions for the Passover Seder. From grating her own horseradish for the chrein to the little carrots on her home-made gefilte fish, she really nailed it down.

An even bigger challenge is trying to make a Passover menu that will fit the First Lady’s wish to see more healthy and fresh food on the table. The traditional Seder fare is hardly fresh or healthy, but I hope some of the new dishes served and a spread of side dishes that included wilted spinach, carrot souffle and roasted sweet potatoes helped offset some of the Jewish carbs…

The kitchen staff prepared the batter for the matzo balls in advance, according to a recipe by the grandmother of Herbie Ziskend, one of the Seder guests. Susan and I, having finished cooking our own dishes, happily rolled the batter into small matzo balls and cooked them in home-made chicken broth.

In late afternoon I went upstairs with Cris to help her arrange the main Seder plate and individual Seder plates for each one of the guests. We decided to go with grated horseradish and not lettuce for the Maror, since that’s what my grandmother always used to serve.

The dining room looked stunning, with the gold-lined dishes purchased during the Clinton time and beautiful flower arrangements. Participants around the table were given Maxwell House hagadah’s – a touch of old time tradition that many Jewish Americans can cherish.

Working behind the dining room we could hear the Seder start. It was nice to listen to the guests reading the blessings together, singing Dayenu and the Eliyahu Hanavi. But the most touching moment for me was to hear them all recite “In every generation it is one’s duty to regard himself as though he personally had gone out of Egypt.” And the tale of the exudes was told even in the White House on Tuesday night.

After dinner I was informed by one of the waitresses that the President himself asked about the salad and that the First Lady liked it. If you read this blog regularly, you had the recipe months ago. Here it is again, if you’d like to get a sense of what a White House Seder tastes like.