Cooking to Heal — On Both Sides of Green Line 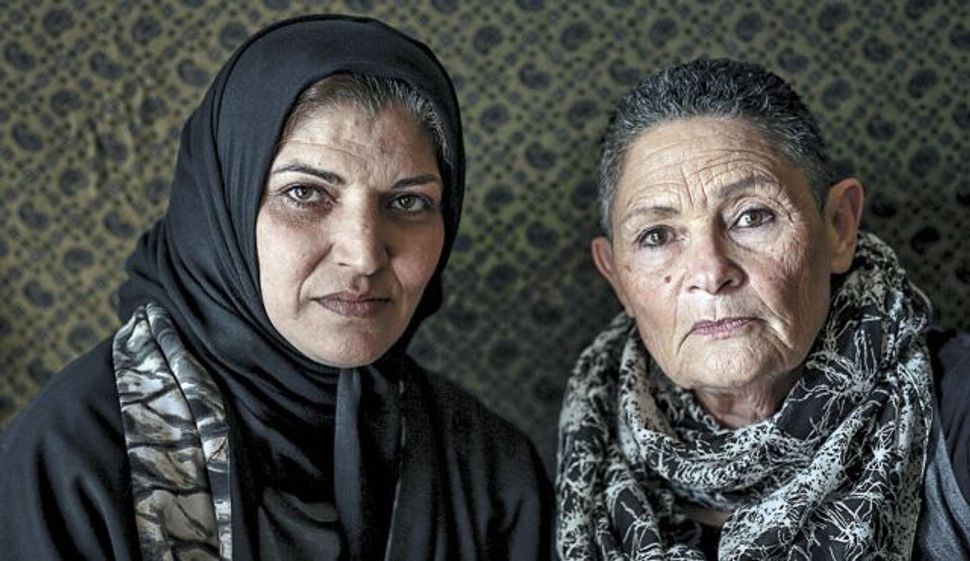 From left: Bushra Awad and Robi Damelin, two of the 50 women who took part in the project. Photo by Dan Peretz

(Haaretz) — “This is Subriya,” says Robi Damelin, as she begins introducing the people sitting around the table. “She lives in Nablus, and is one of the best cooks in the group. The pumpkin jam and plum jam, two of the best recipes in the book, are hers. This is Tamara Rabinovich from Jaffa, who contributed an amazing recipe for pickled cucumbers in a bag, and this is Umm Ahmed, who also makes all kinds of pickled vegetables, some so spicy they can bring you to tears. Tell the truth, Umm Ahmed — weren’t you trying to kill the Jewish women with your pickles?” A translator renders Damelin’s comments into Arabic, and Umm Ahmed laughs heartily. “Not all the Jewish women, Robi. Just you.”

Black humor is an integral part of the group dynamic. The common denominator for all these women, Israeli and Palestinian, is bereavement. All have lost close family members to the Israeli-Palestinian conflict, all are members of the Parents Circle – Family Forum, an organization that seeks to foster dialogue between the opposing sides based on a common sense of pain. “The understanding that the pain of loss is the same pain is always the starting point,” says Damelin, who became very active in the forum after her son David was killed in 2002.

Umm Ahmed (Fatima al-Ja’afari), who lost two brothers, Ali and Mohammed, joined the forum seven years ago. “I met Robi for the first time when I came to pay a condolence call at the home of a neighbor whose son was killed by soldiers,” says the charismatic woman from the Deheishe refugee camp. Al-Ja’afari, who in the past spent five years in an Israeli prison for her political activity, heads a group of women that is trying to make traditional Palestinian embroidery a source of livelihood. “I was shocked to see an Israeli woman there. The first meeting was hard and tense. Robi told me she’d lost her son, and I shouted at her that I lost two brothers and that the Israelis want to kill us all and take our land. The second meeting was in the group in the forum; they asked me to come and tell my story, and we’ve been best friends ever since.

“My family and others were very angry at first. My granddaughters, all teenagers, were the biggest opponents. They said, ‘The Jews have abused you and your family your whole life. How can you sit at the same table with them?’ But having known great suffering my whole life, I decided to become a member of the forum because I have 33 grandchildren, whom I don’t wish to see suffer like I did. I don’t want them to have to see the kinds of things I’ve seen.”

“Jam Session,” a lovely cookbook of recipes for vegetable and fruit preserves, came out of the forum’s activity. “It started with a weekend seminar a year and a half ago, with only two women,” says Damelin, who has a real love and admiration for culinary pleasures. “The forum has 600 families, men and women, and although I hate empty phrases like ‘female empowerment,’ there was a desire among the women members to get more closely acquainted. Eventually, we had a group of 50 women, 25 from each side, who wanted to spend time together and expand the relationship through cooking.”

Food writer and publisher Gil Hovav and chef Hussam Abbas, both longtime friends of Damelin’s, from the time when she ran a PR firm and before she became a bereaved parent, volunteered to help and offer guidance. The result — three seasonal get-togethers in which the women prepared a variety of jams and preserves and taught each other the secrets passed down in their families — was also documented by photographer Reli Avrahami.

“We wanted a type of food that keeps, because we wanted to sell what we made at a fair, with the proceeds going to fund the forum’s activity,” explains Damelin. The reasons may be practical and prosaic, but fermented and pickled foods are currently a hot topic in the culinary world, and for good reason. Just last week, American chef David Chang published an enthusiastic essay in praise of traditional “rot” as opposed to the modern fetish for everything “fresh.” Preserved food, and the techniques designed to overcome nature so as to satisfy man’s needs and desires, have played an important part in human social and cultural history. While the two sides may easily be able to get into an argument over a plate of hummus, it’s harder when it comes to quince jam or an ancient technique for brining olives, even if some differences are apparent due to varying geographic and cultural sources.

Bushra Awad, a bereaved mother from Beit Umar, made grape syrup, olive butter and malban — a dessert made of grapes, sesame and nuts. “Just meeting is enough to bring people closer,” she says. “The cooking isn’t really needed, but apparently there’s some truth to the old Arab saying that bread and salt are a means of connection.” Damelin, who made aliya in 1967 from South Africa, contributed an Anglo-Saxon orange marmalade that appears alongside hushhash (bitter orange) jams made by sisters from the other side of the Green Line. And bereaved Israeli women, some of them native-born, another two of Danish and Iraqi background respectively, all contributed recipes that were passed down by their mothers. The result, like the group’s encounters, exudes a zest for life and a sober optimism. The joint pictures of the contributors and the restrained text relating the women’s stories are rare in this age of inflammatory rhetoric and absence of dialogue. Proceeds from the sale of the book help support the group’s activity.

Cooking to Heal — On Both Sides of Green Line