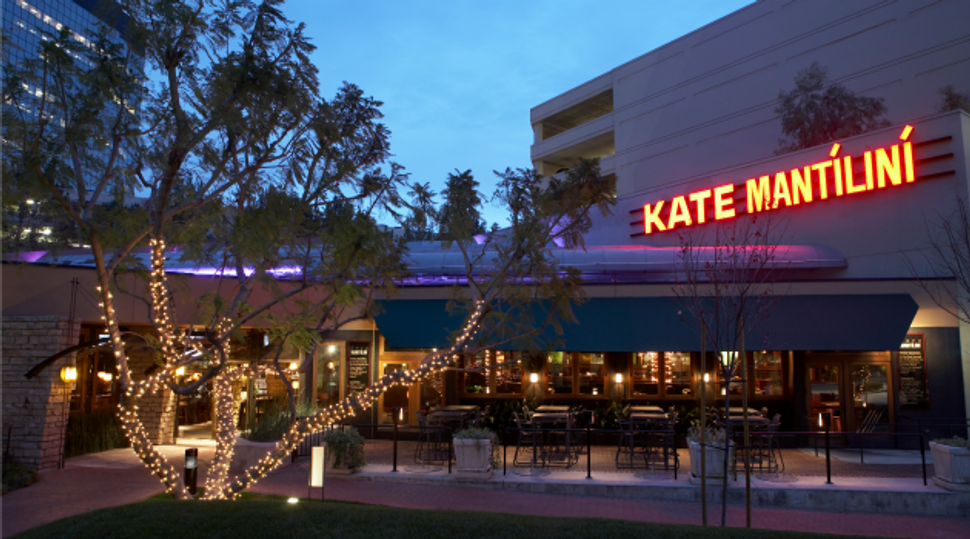 Mel Brooks Ate Here! If the booths at Kate Mantilini could talk, they’d have plenty of Jewish stories to tell.

Mel Brooks Ate Here! If the booths at Kate Mantilini could talk, they’d have plenty of Jewish stories to tell./Image courtesy of Kate Mantilini restaurant.*

(Reuters) — The din of voices haggling over movies and pitching TV series, as familiar as the trademark meatloaf and grilled salmon, will soon disappear from Kate Mantilini, the Beverly Hills restaurant whose booths have long been a mainstay of Hollywood’s power lunch crowd.

Situated on Wilshire Boulevard in the heart of Beverly Hills, Kate Mantilini – a favorite of comedian Mel Brooks and late director Billy Wilder – will close its doors and pack up its wood-backed booths on June 14 after 27 years.

“Many, many deals were made in those booths,” said Adam Lewis, the restaurant’s chief executive who made the decision to close after a rent increase. An outpost in Woodland Hills in Los Angeles’ San Fernando Valley will remain open.

“There’s a semblance of privacy in there, but you can hear everything everybody is saying,” added Lewis, 59, whose older brother David is the executive chef. “I’ve listened to pitches go down; some were really good, some I can’t believe they made it this far.”

The restaurant’s popularity among the Hollywood set was down in part to its location, said Tim Gray, a senior vice president of trade publication Variety.

It sits across from film studio The Weinstein Co and two blocks from the Academy of Motion Picture Arts and Sciences, the industry organization that hands out the Oscars.

“It really was one of the staples for industry lunches,” Gray said of the restaurant that is arranged like a postmodern diner with a large sculptural sundial, a key early work by Pritzker Prize-winning architect Thom Mayne’s firm, Morphosis.

Kate Mantilini ranks as a top 10 business lunch spot for entertainment industry insiders, according to a Hollywood Reporter poll.

“Everybody who comes here is an agent or lawyer or a manager and everybody table-hops – and they rely on good food,” Lewis said, sitting at a round table with his brother and 84-year-old mother, Marilyn, who started the restaurant with her late husband Harry Lewis, a former Warner Bros contract actor and founder of popular chain Hamburger Hamlet.

“It was a real industry hangout … because it had this amazing, huge menu,” Gray said. “They had everything in the world on it.” Dishes include chicken pot pie and other comfort foods, and health-conscious staples such as brown rice with vegetables.

Marilyn Lewis, a self-described born-marketer who ran her own couture clothing line Cardinali in the 1960s-70s, said she named the restaurant after her uncle’s mistress, whose long red-polished fingernails enthralled her as a child.

“I liked the sound of it, and it would take a lot of letters, a lot of signage,” she said. “It is important for this fast traffic because when they stop at the light and they see that big sign, they’ve got to know that something’s going on there. Something.”