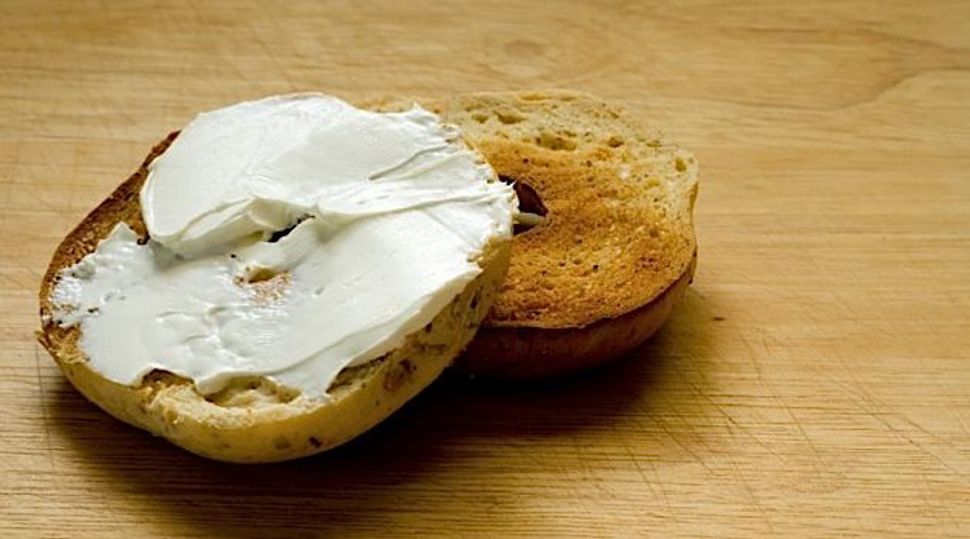 (Haaretz) — In the popular American imagination, cream cheese is inextricably linked to the old Jewish man selling it in a deli. But in fact, cream cheese is not an Eastern European product brought to America by Jewish immigrants, but a homegrown American product developed by a non-Jew. Oh, and Philadelphia cream cheese is really from New York.

Cream cheese’s non-Jewish past was uncovered by Rabbi Jeffrey Marx, leader of a Santa Monica synagogue for the past 28 years, and ever since his research was published, a sought-after speaker and radio interviewee whose infectious passion for the subject makes a listener hunger for a bite of New York cheesecake. “People laugh when they hear what I’m going to talk about,” says Marx. “’Cream cheese? What’s so interesting about that?’” But it’s a wonderful way to tell the story of Jewish immigration to America, he says. Although Jews didn’t bring cream cheese from Europe, they adopted it as soon as they could afford it. In a reverse cultural process, Jews took it from the Yankees and Protestants, made it Jewish and returned it to America, Marx explains.

For years, Jewish historians in America have been trying to answer the question of how Eastern European immigrants came off the boat penniless and within a generation had entered the comfortable middle class, Marx continues. How did they do this so quickly, or is that just a legend? He decided to investigate the story of two brothers who came from Lithuania, Joseph and Isaac Breakstone, distant relatives of his, who opened a dairy in America. In the course of Marx’s research, he was told by various descendants of the brothers that it was they who originally brought cream cheese to America. Inspired to look further, he investigated and found out that this was not correct. “So I decided to write a footnote about cream cheese to say where it actually was invented. Six years later, the footnote was a whole article. In the process, I learned about cheese-making, about factory design, about the cheese market in the nineteenth century and how cream cheese was considered a fancy product for the upper class.”

His careful tracing of the history of cream cheese reveals much about technological progress and social change in the latter half of the nineteenth century, processes that forever changed American culture and the dairy industry. Marx was born in 1953 in Connecticut. He is related to Rabbi Shlomo Carlebach, and the fourth in a line of Reform rabbis.

In his article, “The Days Had Come of Curds and Cream: The Origins and Development of Cream Cheese in America, 1870-1880,” published in the international scholarly journal “Food, Culture and Society,” Marx argues that cream cheese has its roots in the British dessert “consisting of pure cream curdled with rennet (the dried fourth stomach of a young, unweaned calf), sweetened with sugar and flavored with rosewater” that was popular with the upper classes during the Tudor Era (1485-1603). “Cream cheese, like most food products, was not invented but, rather, developed over time,” writes Marx.

In the years that followed, cheeses made from a combination of cream and whole milk became increasingly popular in Britain. “The English colonists to America brought with them a taste for these cheeses and the knowledge of how to make them,” Marx writes. Basic recipes appeared in American encyclopedias, magazines and cookbooks, most of which were published in Philadelphia, which was known for its dairies. At first cream cheese was produced on small farms by expert cheese-makers, and was an expensive product that easily spoiled. In the absence of a means to keep it chilled long enough – even the fastest horse-drawn wagon took a day and a half to reach New York – it didn’t get much beyond Philadelphia. But with the advent of railroads and steamships and more advanced means of refrigeration, the picture changed dramatically. By 1847, the newspapers announced that cream cheese from Philadelphia had come to the New York market. “It is round, generally from six to ten inches in diameter, and about one inch thick.”

Marx shines a spotlight on the people who developed cream cheese into the product we know today. Prominent among them is William Alfred Lawrence (1842-1911), who added a higher fat content. After losing his father at a young age, Lawrence became a poor farm worker in Chester, New York. In 1861, his fortunes improved when the farmer’s daughter fell in love with him. They married and he took over and later inherited the farm. Having learned about cheese-making, in the 1870s he sold the farm and went into factory production of Neufchatel cheese after purchasing a failing plant from a French businessman. Lawrence came into the cheese business at the right time. There was manufacturing technology, exporting services, refrigeration techniques and a market for “fancy cheese.” Few workers were required and a reliable product was assured. Cheese dealers preferred to pay more to work with a factory rather than having to run back and forth to a lot of small farms. There were substantial profits to be made in manufacturing thousands of kilograms of cheese per year.

At the time, there was growing demand in American cities for fresh products directly from the farm, as well as in Europe for American cheeses. By 1870, 800 new cheese factories had opened in the state of New York. The middle and upper classes liked to eat “fancy cheeses” – Stilton, cheddar, brie, camembert, gruyere and Neufchatel – to feel rich. There was a growing interest in French cuisine, with French cookbooks being published and the first French restaurants opening. The papers gave extensive coverage to the lavish galas of wealthy New Yorkers where elaborate cheese trays were served, and the nouveau riche sought to replicate this at home.

Quality was highly variable. “Americans had no idea what real Neufchatel was,” says Marx. Whereas in France the ripening process took weeks, in America this was dispensed with so that the cheese could be shipped the day it was made so as to reap more profits. And despite the questionable quality, people just wanted more.

In 1873, a fancy delicatessen in New York City known for selling products that costs five times more than anywhere else asked Lawrence to come up with a new rich cheese that it could sell. After doing some research, Lawrence took Neufchatel and added cream and salt, packaged the new product in squares (a new shape that helped maximize profit) and gave it the not-so-innovative name of “cream cheese.” This opened the door for the fat content to be increased from 4 to 6 percent. And in the decades that followed, the process accelerated, with technology eventually enabling cream cheese to stabilize at 33 percent fat, giving it that smooth texture and slightly sweet taste. But in the beginning, Lawrence struggled with the complicated process of adding fat to the cheese, and with packaging such a soft cheese. It wasn’t very suitable for exporting either. Luckily for him, it became the most prestigious cheese on the local market, though he soon found that everyone was trying to copy him. To set himself apart he came up with a modest logo, a profile of a cow, and began distributing the first branded cream cheese throughout the United States. He purchased another factory, and as the technology advanced, before long he was producing more cheese than the market demanded.

It’s all in the marketing

Alvah Reynolds, a New York distributor, helped market the product for Lawrence. He packaged the cheese in aluminum foil and re-branded it as “Philadelphia Cream Cheese” even though it was made in New York. “It’s like calling something champagne. Philadelphia was considered to be the place where the best cheese was made, the best butter, the crème de la crème,” Marx explains. Reynolds designed a new logo and added the phrase “Beware of Imitations.” The marketing campaign was so successful that Lawrence could barely keep up with demand. In 1903 the Phoenix Company bought the Philadelphia trademark and in 1928 they merged with the food giant Kraft. As the brand grew and changed hands, Lawrence, the poor farm boy, grew up to own race cars and race horses and three beautiful homes.

In his article, Marx cites the oft-told tale of how Lawrence allegedly eavesdropped on Neufchatel manufacturer Charles Green as he described his cheese-making process, but not hearing clearly, mistakenly added too much cream, thus leading to the invention of cream cheese. However, Marx explains that the whole process was well-planned and cream was not accidentally added, and that prior to his research, most encyclopedia entries about cream cheese, even in the most reputable publications, repeated this unfounded story.

Marx acknowledges that cream cheese is not all that popular in Israel.

“I really don’t remember seeing cream cheese here in 1978, the year that I lived in Israel. You prefer lighter cheeses, like cottage cheese. Maybe that will be my next research topic – Why did cream cheese never really take off in Israel? And why don’t you find the cultural phenomenon of a bagel and lox with cream cheese here?”