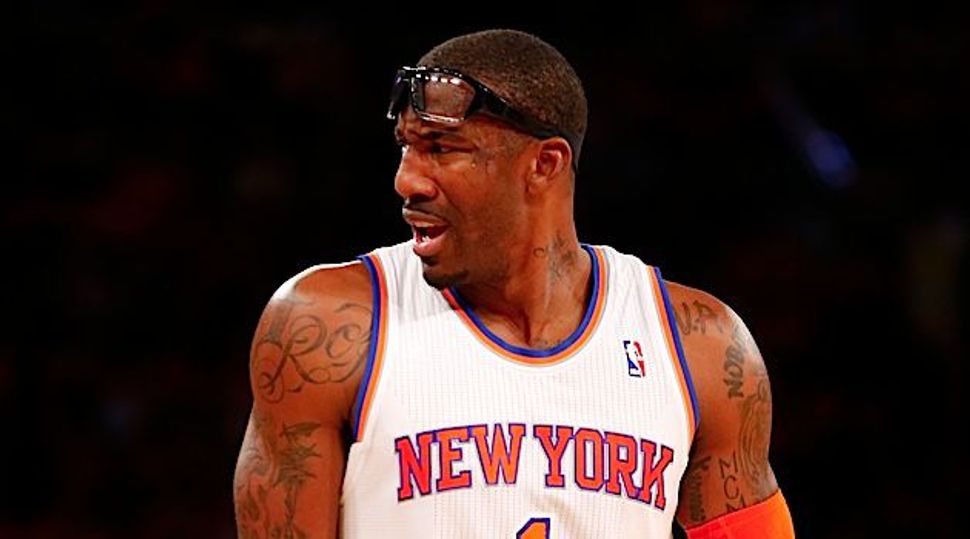 He has a Star of David tattoo and a diamond pendant that spells out “YHWH,” one of God’s unwriteable names. He’s has parents he identifies as “Hebrew.” And he’s has part-ownership of an Israeli basketball team.

Now, hoops superstar Amar’e Stoudemire also has a cookbook, written with a personal chef whose career started at a kosher catering company.

Stoudemire’s “Cooking with Amar’e,” penned with Chef Max Hardy, shares “more than 100 healthy recipes… that blend French, Southern, Asian, and Caribbean traditions and flavors, and use ingredients from the local grocery store,” according to the jacket blurb.

Though Stoudemire only eats kosher food, the book includes just one traditional Jewish recipe, for brisket, along with more conventional (and non-kosher) fare like seared scallops, roast chicken, and chili.

“Cooking with Amar’e” plays the recipes as a student-teacher schtick, with the basketball legend an eager grasshopper to the chef’s culinary sage. “Max got me so interested in healthy cooking that I asked him to show me how to cook,” Stoudemire writes in the book’s intro. “I love making my vegetarian chili, though I had never even heard of ground tofu until I met Max.”

For his part, Hardy calls his gig “the best job in the world” in his intro. It also have him a chance to reconnect with kosher food. “Amar’e, whose mother is Jewish, likes me to buy kosher food in keeping with his Hebrew background, although he doesn’t keep strictly kosher,” Hardy notes. “In my role as his cooking teacher, I’ve happily watched him become comfortable at the stove.”

Divided into sections with sports-inspired titles — “The Warm-Up” for appetizers, “Game Day” for mains, “Sweet Victory” for desserts — the book’s offerings run the gamut from avocado hummus and homemade bagel bites to couscous, collard greens, and Cornish hen.

Cooking with Amar’e is just the star’s latest nod to his Hebraic heritage. Last August, as the Forward reported, Stoudemire applied for Israeli citizenship amid speculation he might actually decamp for Israel. “At his wedding last year to Alexis Welch, Stoudemire donned a yarmulke and prayer shawl for the ‘Hebraic’ ceremony. In July, he announced he had become a part owner in the Israeli basketball club Hapoel Jerusalem,” the Forward noted.