Why I Spared the Bunnies From Knife 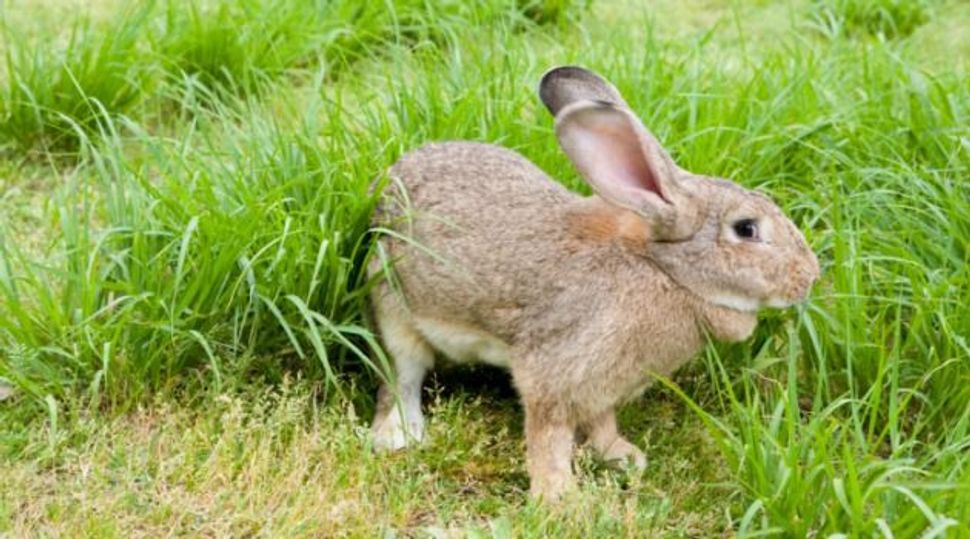 (JTA) — We were out weeding squash last week when Fred came over to say he had to show me something but he feared it would lead to an act of violence.

Regular readers will know Fred is the farm’s sole employee. (I believe the technical term is “farm hand.”) He’s also a devout Hare Krishna, strict vegetarian and devotee of non-violence.

With a prelude like that, I knew where this was heading.

Fred led me to a spot in the field, cleared away some brush, and there in a small hole were four or five baby rabbits. Fred and Raul – one of Fred’s spiritual fellow travelers and an occasional presence at the farm – were busy cooing over their find. I was completely unmoved. I realize this makes me sound like a heartless ogre, but cute as they were, I had bigger fish to fry (or rabbits to roast, if you like.)

I had seen momma bunny hopping around with her cotton tail (Fred had rather unhelpfully christened her Hare Krishna — get it?), and all I could think about when looking at those little tufts of fur was that rabbits breed like rabbits! Soon there’d be lots of Hare Krishnas running around (a Fred fantasy, I’m sure) and I’m pretty convinced they’re the ones that have been chomping on my snap peas. The babies had to go, and I knew exactly how I was going to do it.

The other regular presence on the farm is my landlord Joe. An Italian immigrant with a thick accent and a penchant for dropping the last syllable of words, Joe is a lifelong farmer, a Catholic and a carnivore. He raises a handful of goats on the farm that he kills with a small knife to the throat and butchers himself. A few weeks back, he asked me if any vendors at the market sell rabbit meat. I didn’t know, but Joe went looking himself and came up empty. I figured presenting him with this find would buy me some goodwill.

When I got back to the field, Fred was outraged at what I had done. “I feel nauseous,” he said, and I felt a wave of guilt wash over me.

As I’ve written several times in this space, I’m not interesting in unleashing hellfire on all the life at my farm that doesn’t serve the needs of my crops. For one thing, there is no such life — everything living on the farm and its environs has its place in the ecosystem, the health of which is indivisible from the health of my vegetables. For another, an arms race in the field would be both futile and ultimately self-defeating. What I’m after is balance, cultivating the various forms of life around me but managing them such that there’s space for the food we grow. Sometimes that means absorbing the hits nature delivers. Other times it’s getting the damn rabbits out of the field.

Giving Joe the bunnies seemed to have met the balance standard. The animals would serve a useful purpose as someone’s dinner. That’s killing, to be sure, but not the wanton kind. It doesn’t foreshadow my rampaging through the woods to find all the bunnies and take their lives, but it is a small measure aimed at keeping the population at manageable levels. Fred saw the matter differently: as the needless taking of life and, maybe, as a small act of betrayal.

In the end, the bunnies were spared the knife. Fred retrieved them from Joe, who apparently issued no objection. They are currently being nourished on grass in the courtyard of a Hare Krishna temple in the Hartford suburbs, awaiting the day they are strong and fit enough to venture back into the wild. Hopefully in a field very far from mine.

Why I Spared the Bunnies From Knife