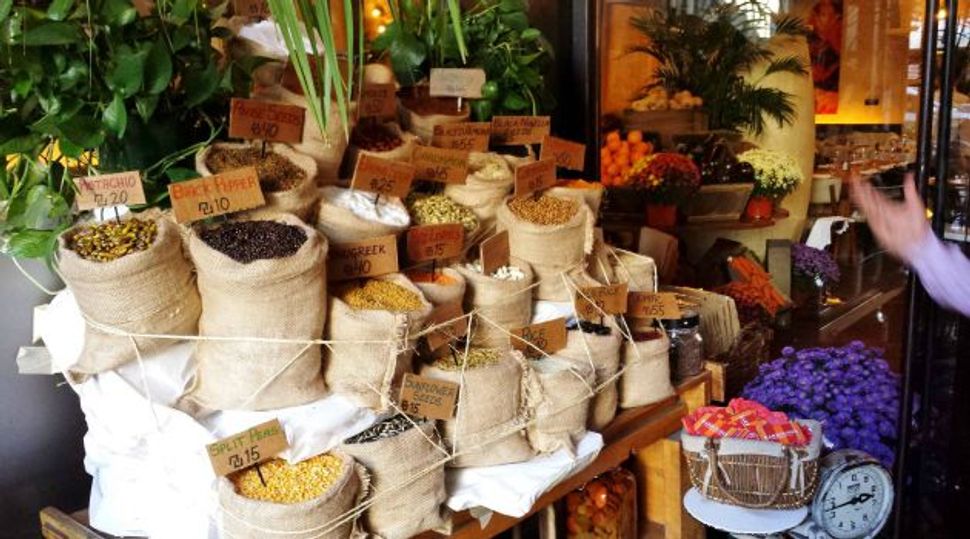 The scene this week at Barbounia. Photograph courtesy of Barbounia Restaurant.

The Mediterranean restaurant Barbounia has been totally transformed. This week, through Saturday night, executive chef Amitzur Mor is cooking up a dinner menu full of dishes inspired by Mahane Yehuda market, the Jerusalem shuk. Calling it Barbounia Cooks Jerusalem, the Israeli chef says the festival is a salute to that city’s rich culinary and cultural heritage.

“The coolest thing was the challenge of taking the old-school, almost forgotten food that’s mainly done in houses — they sell it down in the shuk, where they keep it on a burner all day — and we actually created those dishes and tried to get all the flavor, but made them restaurant dishes.”

Decorated to look like a replica of the near-century-old market, the restaurant on Manhattan’s Park Avenue South is serving three classic street beverages—fresh almond milk, tamarind juice, and grape juice — from the same big vending machines found in the shuk.

“How to roll a kibbeh, we’re pretty much there — but I’m sure some of those old grannies do it better,” Mor said.

For dessert, there are traditional Middle Eastern pastries and other confections—and of course chunks of halva, cut from oversize wheels.

“There was a lot of learning,” Mor said. “The day I learn something new is a good day.”