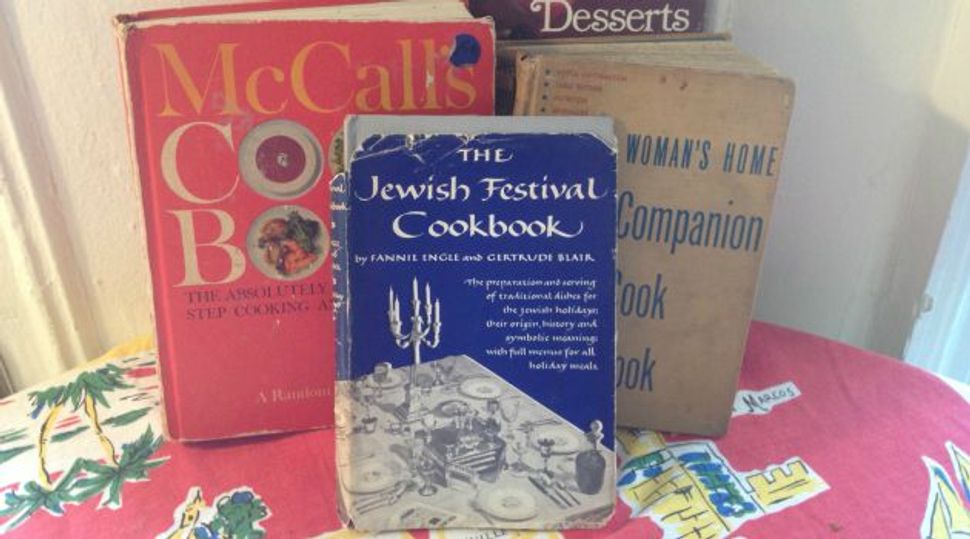 The author’s vintage cookbook collection includes “The Jewish Festival Cookbook” from 1954, which provided insights into the mysterious world of Jewish holidays. Photograph by Jon Wunder.

When I say I’m Jewish, I put the emphasis on the “ish.” Yes, I had a bubbe and a zaide; we tossed around words like “oy” and “schmutz”; and we ate foods my friends had never heard of. We had tongue, matzoh brie, borscht, and the requisite Sunday-morning breakfast of bagels with cream cheese, whitefish and lox, all from the Jewish bakery and dairy. (This was long before every Episcopalian was having a bagel with a schmear after church.)

But we never acknowledged any of the holidays, and the synagogue was a place family friends had their weddings. We celebrated birthdays, and prayed at Maple Leaf Gardens for Toronto to win the Stanley Cup.

We were ethnic Jews, pure and simple.

In 1970s Toronto, outward displays of Judaism were confined to specific neighborhoods — ones where I didn’t live. Moving to New York in my late twenties was a bit of a shock. I never knew Judaism could be part of mainstream culture. “Oy” was bandied about by girls from North Dakota, who didn’t know the difference between Jewish and Swedish. The grocery stores sold Manischewitz products all year round.

Living in New York inspired me to learn more about Judaism, and an attempt was made to partake of its traditions and rituals. I started, logically, with the big one, Yom Kippur. My fast lasted about 63 minutes, until my caffeine-deprived body reacted with a headache of such force that I thought I was actually being punished for atoning.

It’s too bad, because I love the idea of Yom Kippur: the reviewing of the year, the cleansing of the body. All of it sounds so good on paper.

Speaking of paper, my quest for knowledge of all things Jewish coincided nicely with my affinity for old cookbooks. So I scanned the shelves of secondhand bookstores hoping to find a title that would serve as my guide to the Jewish kitchens and traditions of yore. And one day, there it was: “The Jewish Festival Cookbook,” by Fannie Engle and Gertrude Blair, published in 1954. This is not just a cookbook: It explains the significance of every holiday, high and not so high, provides full menus for each one and recipes for each dish, and finally, as an added bonus, it offers tips and suggestions on how to be the perfect 1950s Jewish housewife.

Considering how little I knew about being Jewish, I couldn’t help but learn a lot. For instance, while I did know that one would have to dine before the Day of Fasting, I had no idea that there was a traditional ritual meal. I just figured you would stuff up on carbs and cake and call it a day.

But no. According to Engle and Blair, “The meal before the fast is eaten long before sundown on the eve of Yom Kippur. The women of the household have prepared a holiday meal… Dishes served at this meal must be bland, without spices, herbs, or salt, so that they will not induce thirst during the fasting hours.”

In retrospect, almost every meal at my bubbe’s could have been considered a Dinner Before the Fast.

The “Dinner to Break the Fast” is a delightful menu that calls for seasonal ingredients. It’s a meal I like to think I’d actually make. But I also like to think the Leafs will win the Stanley Cup.

Dinner Before the Fast from “The Jewish Festival Cookbook”:

Dinner to Break the Fast from “The Jewish Festival Cookbook”: